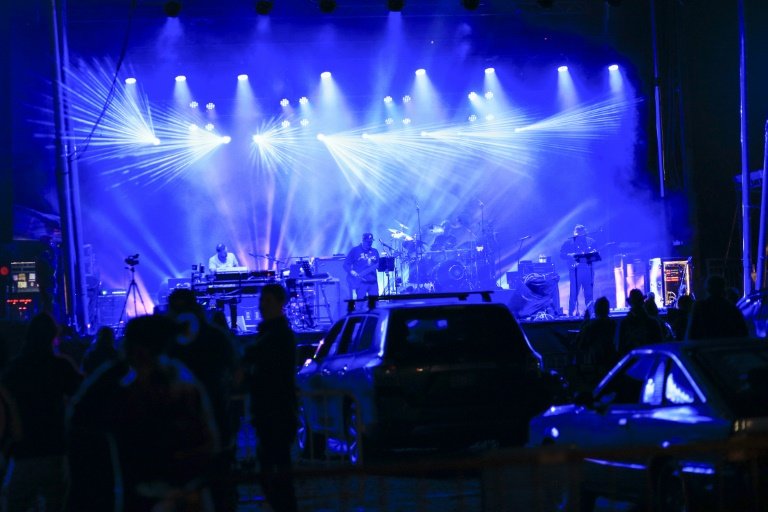 The band Disco Biscuits performs at a drive-in rave in Scranton, Pennsylvania, on October 23, 2020 / © AFP

Clearly visible from afar with her flashing earrings and sequined jacket, Charity Valente is attending her first drive-in rave: a night of electronic music where the party-goers are in or around their cars, owing to the coronavirus pandemic.

"We've been waiting for live music for seven months," she said, after driving four hours from Pittsburgh to see US jam group "Disco Biscuits."

On a remote hilltop in Scranton, Pennsylvania, dubbed "Electric City" because it was home to the first electric streetcars in America, more than 100 cars are lined up, their headlights trained on the stage where two giant screens have been set up.

"We think it's the safest way for people to get together and enjoy music" during the pandemic, said Donnie Estopinal, who has since May been organizing drive-in raves in several states, including Texas, South Carolina and Florida. 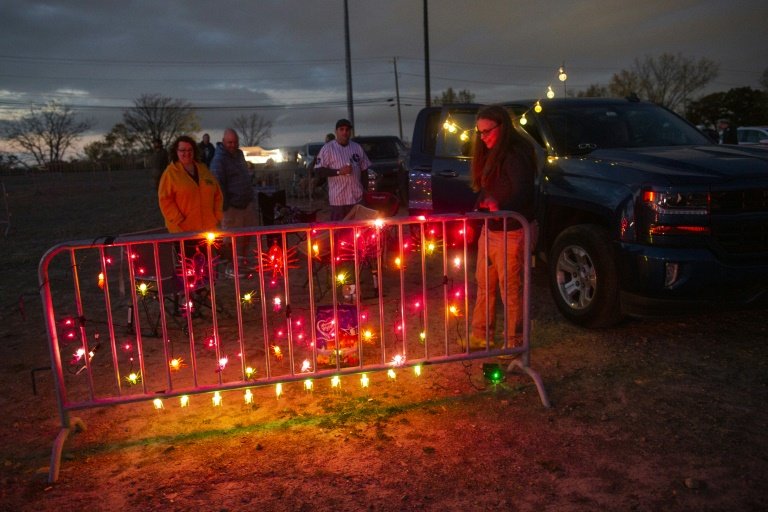 Each one had a different theme -- a DJ or a band, a dedicated radio frequency, multiple stages, fireworks -- but there is one constant: the ravers stay in their vehicles, or next to them.

The trend was born in Germany in April, where the first in-vehicle raves sprang up after music festivals and clubs were shut down.

But with the drive-in being a classic part of America's heritage, the phenomenon quickly caught on here with raves organized in a dozen states since the spring. On average, between 150 and 450 cars show up, with up to 2,500 party-goers.

Dylan Star, striking yoga poses by her rented white Toyota before the start of festivities, really appreciates having her "own space" to dance.

Tickets go for between $100 and $300 per vehicle. That buys a parking spot and an area marked off by a metal barricade to party in, a short distance from the other attendees. 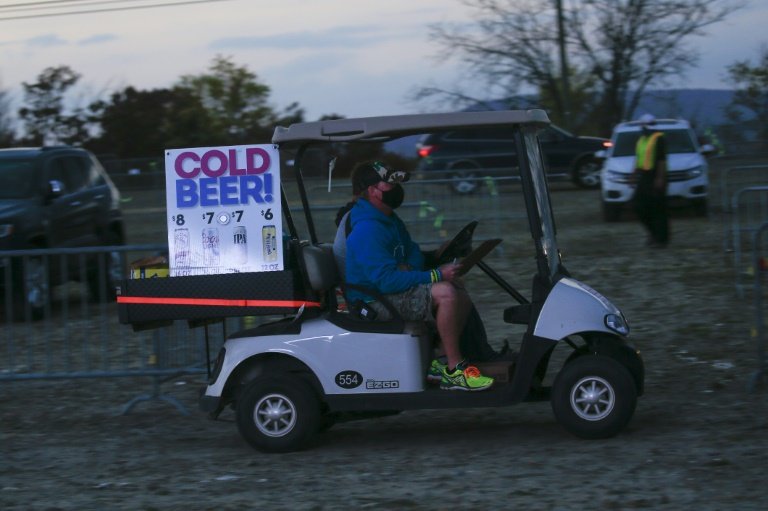 In order to avoid lines and the risk of infection, instead of a bar there are golf carts that rumble down the dimly lit aisles delivering beers and cocktails to ravers who bought them on an app.

The experience is out of the price range for many, but for some the financial sacrifice is worth it.

"Being able to see live music for the first time since the start of the quarantine brings me so much happiness, and it will definitely have a lasting impact on my mental health," said Claire Gibson, 26, while two of her friends groove to the beat beside her.

The young woman with pink hair has Type 1 diabetes and is thus more susceptible to more serious health repercussions if she catches the virus.

"I was nervous about going to an event like this, as I have been extremely cautious," she said.

Even though she knew plenty of people at the event, she decided to stay within her designated space and take advantage of the drinks delivery service. 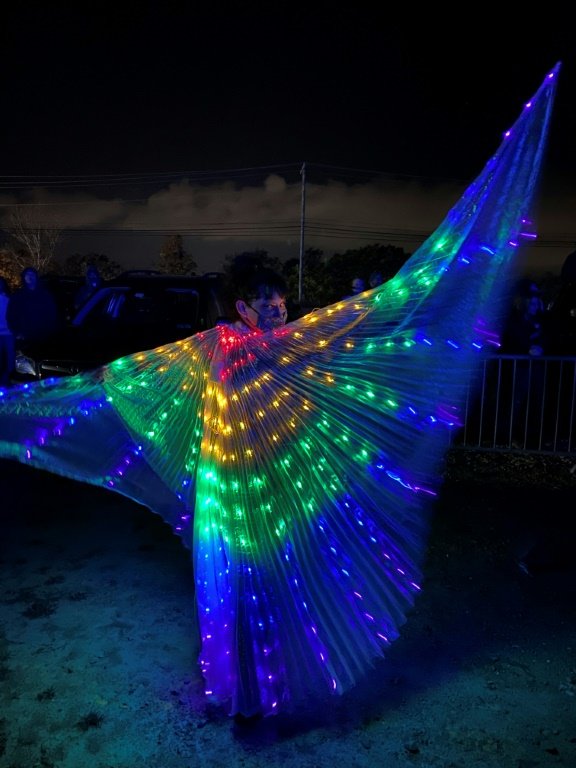 Tiffany Griffiths, 41, dancing in the aisles at the Disco Biscuits drive-in concert in Scranton, Pennsylvania / © AFP

"People are being respectful and following the rules," said Tiffany Griffiths, as she waved her luminous rainbow cape between the aisles.

She risked being stopped by the handful of security guards, charged with making sure everyone stays in their allotted spaces and wears a mask.

"People don't really respect the rules," said security guard Tom Bohnemberger, wearing a high-visibility vest as he patrolled the grounds with a colleague. "You have to tell them to put their masks on, again and again and eventually they listen."

"We had zero reports of any Covid-related transmissions during our event," said Steve Masterson, organizer of the Scranton event, who said he followed all local health authority guidelines. 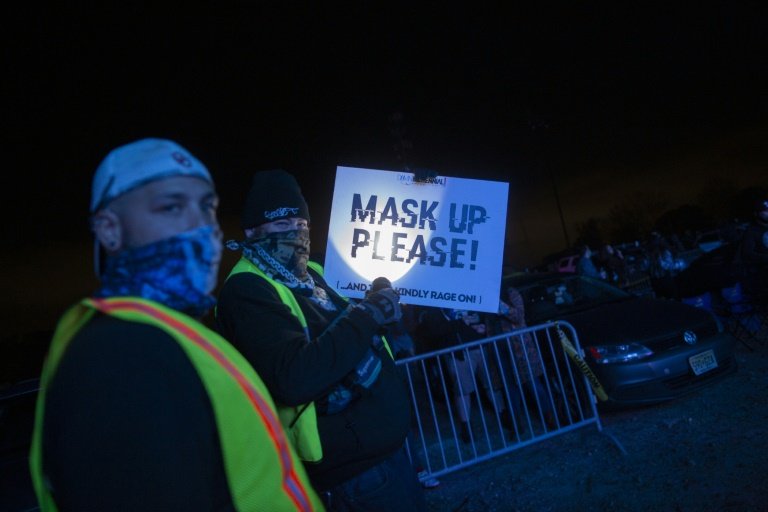 Security guards remind party-goers to keep their masks on / © AFP

Even if some people needed to be reminded of the rules, most of the rave-goers follow the example of Gibson, dancing in the bed of her pick-up, or waving glow sticks close to their vehicle.

"I don't think it's a full concert experience," said John Warner, running the "Disco Biscuits" merchandise booth. "But we're here working, it's better than nothing."

"I don't think this trend is going to last unless the virus lasts," Griffiths said.

"We all want to go back to festivals,” she said. "People want to get back to how it was."