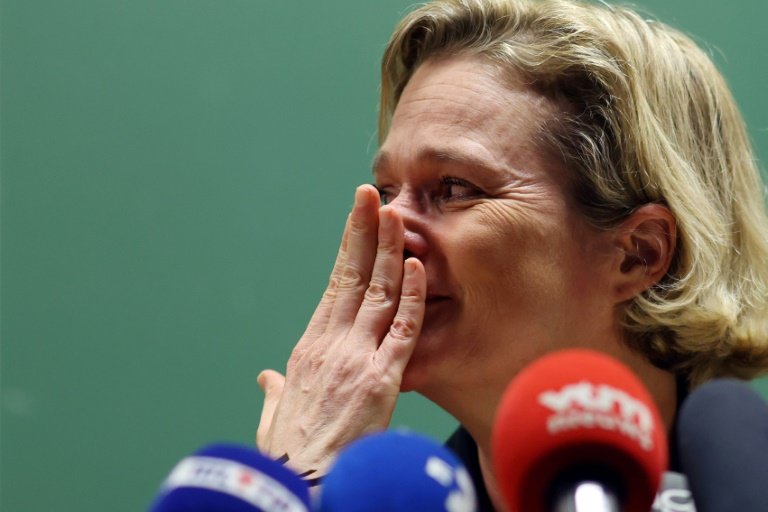 Belgian artist Delphine Boel, who now bears the name of Delphine de Saxe-Cobourg, was emotional as he recounted her battle to secure recognition as a princess of Belgium / © AFP

Court ruling states that Delphine de Saxe-Cobourg can go by the title 'Princess'.

When former king Albert II informed his hidden daughter and the Belgian people, through legal counsel, that he felt no connection with her it was "like a knife in the back," she said Monday.

The former Delphine Boel had kept her silence for years about the king's affair with her mother, like "a little soldier," she told reporters in her first press conference since a court recognised her as princess Delphine de Saxe-Cobourg last week.

But when DNA tests finally revealed that she was his daughter after a long, drawn-out paternity battle, and he still coldly refused to welcome her into the royal family, she pressed on with legal action.

Now, a Belgian court has ruled: the 52-year-old artist can indeed adopt her father's name and call herself a princess. It's a victory of sorts, but she is sorry it came to this.

On Monday, on the verge of tears, she told reporters who gathered at the Free University of Brussels why she had gone the legal route to end the long battle for recognition.

Delphine was born in 1968 to a baroness, Sibylle de Selys Longchamps, and Albert, the then future king of the Belgians, early in an affair that lasted until 1984.

Despite rumours and press reports, Albert continued to deny his paternity throughout his 1993 to 2103 reign and after his abdication, until a court ordered a DNA test in 2019.

The result was finally released in January, and the saga could have been over, but the former king continued to show his daughter the cold shoulder.

In a statement, Albert's lawyers said "the scientific conclusions indicate that he is the biological father of Mrs Delphine Boel."

But they added that his legal paternity was not the same as being a father and noted that he had made no "familial, social or educative decisions" in Boel's upbringing.

In fact, the hidden princess says, she had been in touch with her father until he cut contact brutally when she was 33 years old.

His dismissive rejection of the hard-fought recognition was a step too far.

"After having been a little soldier, of completely protecting him and my mother since the age of 17 and not saying anything because I loved him and we had a good relationship, and having that, it really felt like a knife in the back," she said.

"And so after that, I thought to myself, if that's going to be the case, then all I ask for is to be equal to my brothers and sisters."

She eluded a question about her rights to inheritance, saying she did not do it for money -- the industrialist Jacques Boel under whose name she was raised was very wealthy.

But she wanted to be recognised alongside her legitimate elder siblings: Philippe, the current king, Laurent and Astrid.

And she would never have demanded the title of princess if she had been treated as an equal, she argued.

"I'm not asking for more, I'm not on my knees demanding a gesture, that'll happen or it won't, I don't know," she said, explaining that she isn't waiting to be contacted by her brother, King Philippe.

She paid tribute to her husband, an American businessman with whom she has two adolescent children.

And to sign her artwork, she will simply use her given name, Delphine, she said.

"What I'm happy for is that I really did it for the right reasons, for the right values, and it proved to me that when you stay fair and upright you are rewarded in the end," she said.