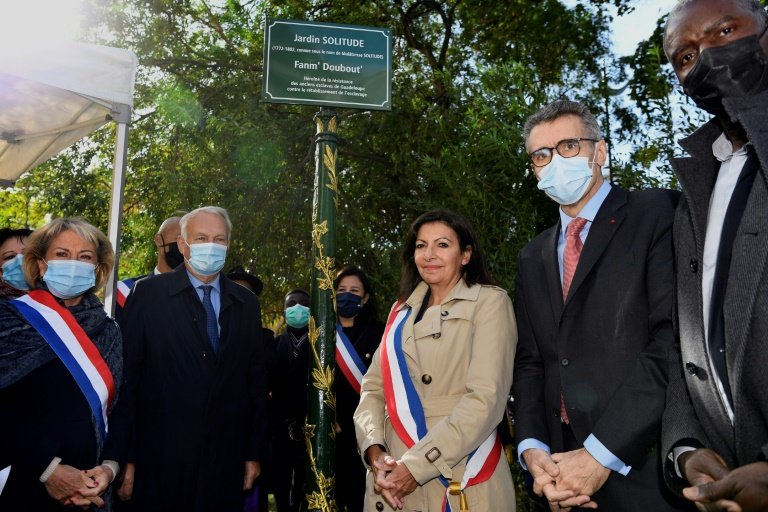 Paris mayor Anne Hidalgo (C) and Jean-Marc Ayrault President of the Foundation for the Memory of Slavery inaugurate a park in Paris named after Solitude, a heroine in the fight against slavery in French Guadeloupe on September 26, 2020. / © AFP

Paris mayor Anne Hidalgo said Saturday the French capital plans its first statue of a black woman to remember a heroine who fought against slavery on the Caribbean island of Guadeloupe in the early 19th century.

Paris mayor Anne Hidalgo said Saturday the French capital plans its first statue of a black woman to remember a heroine who fought against slavery on the Caribbean island of Guadeloupe in the early 19th century.

The woman, Solitude, was a key figure in the resistance movement against slavery in Guadeloupe and was executed for her role aged just 30.

Hidalgo said the new statue was planned as she opened a park in Paris named after Solitude, who she said "with her courage and commitment to justice and dignity opened the way towards a definitive abolition of slavery in France".

"Paris is honouring Solitude, a Guadeloupean figure in the resistance against slavery by dedicating a park to her," added Hidalgo on Twitter.

"Soon, a statue of this heroine -- the very first of a black woman in Paris -- will be erected there (in the park). A strong symbol to never forget her fight," she added.

Slavery was abolished in France in 1794 but under orders from Napoleon Bonaparte troops were sent to Guadeloupe in 1802 to restore the practice there.

The move sparked an insurgency, with many black women who were former slaves rising up. Solitude was arrested and hanged on November 29, 1802, an execution that was held back so she could give birth just one day before.

She was the daughter of a black slave and a white French sailor, who according to some accounts had raped her mother.

"Solitude is the first black woman honoured for herself and for her action in a Paris public space," Jacques Martial, deputy mayor of Paris in charge of overseas territories issues, told AFP.

"A defender of the values of the Republic, a committed woman, she fought for the freedom of all, against the reestablishment of slavery in Guadeloupe. She paid for that fight with her life", he added.

The debate on France's colonial past has been revived by protests against racism and police brutality in the wake of the Black Lives Matter movement that rocked the United States in the wake of the police killing of George Floyd.

Anti-racism activists in July tore down a statue of Napoleon's empress Josephine in the overseas French territory of Martinique.

There have also been calls for the removal of the statue outside France's National Assembly in Paris of Jean-Baptiste Colbert, the man behind the "Code Noir" decree that defined the conditions of slavery in the French colonies.

But President Emmanuel Macron warned in June that France would not take down statues or names of controversial figures, saying it would "lucidly look at our history and our memory together."