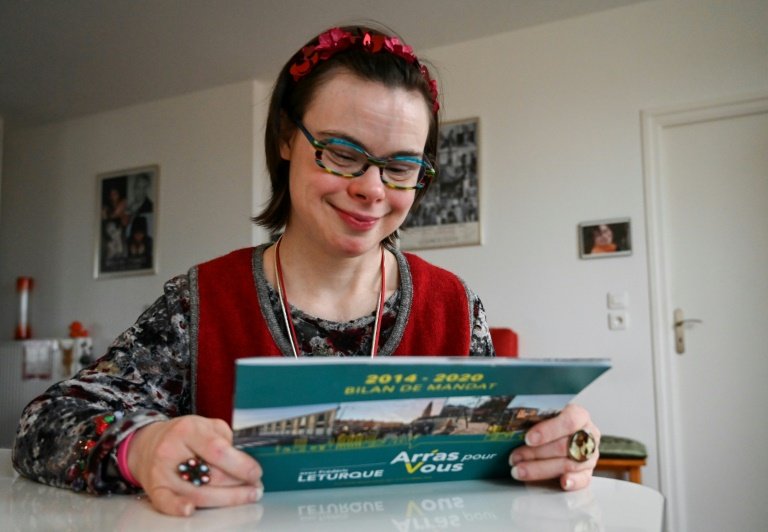 Eloonore Laloux is standing as a candidate in municipal elections for the party "Arras pour Vous" (Arras for You) of Mayor Frederic Leturque, who said "her courage and her perspective" would make a large contribution to the way the town is run / © AFP

When the mayor of Arras, a town in northern France, asked her to stand as a candidate in upcoming municipal elections, Eleonore Laloux, who has Down Syndrome, did not hesitate.

"I would like Arras to change, for there to be improvements... mainly with regard to cleanliness and respect, but also accessibility" for disabled people, the 34-year-old administrative agent and activist told AFP.

"I am ready to make this change happen," Laloux said at her apartment in the city centre, its walls dotted with photos of her posing with TV personalities.

If her campaign succeeds, she will become the country's first serving municipal councillor with Down Syndrome.

Laloux, who lives alone, is fond of fashion and movies, and loves strumming her electric guitar.

She speaks with some difficulty but moves around with seeming ease. Big rings adorn her well-manicured hands, and trendy, multicoloured glasses frame her face.

For years, Laloux has fought for people with Down Syndrome and other disabilities to be able to live happier and more productive lives as fully integrated members of society.

"If I were to see Emmanuel Macron, I would tell him: 'I have something to say to you -- I would like us to talk a bit more about people with disabilities and above all about their inclusion'," she said of the French president.

Laloux is standing for the centrist "Arras pour Vous" (Arras for You) party of Mayor Frederic Leturque, who said "her courage and her perspective" would make a big difference to how the town is run.

"I am neither on the right nor the left, I am in the centre," Laloux told AFP of her political leanings.

Her priorities are not ideological as much as personal: Laloux says she wants to "make perspectives change" about disabled people, and "improve accessibility" for them.

"This is a project close to my heart," the candidate told AFP of her foray into the cutthroat world of electoral politics.

"The mayor trusts me because he knows I am a determined young woman who loves life. I know what I want, I have a crazy temperament but I am happy that Frederic accepts me as I am," she said 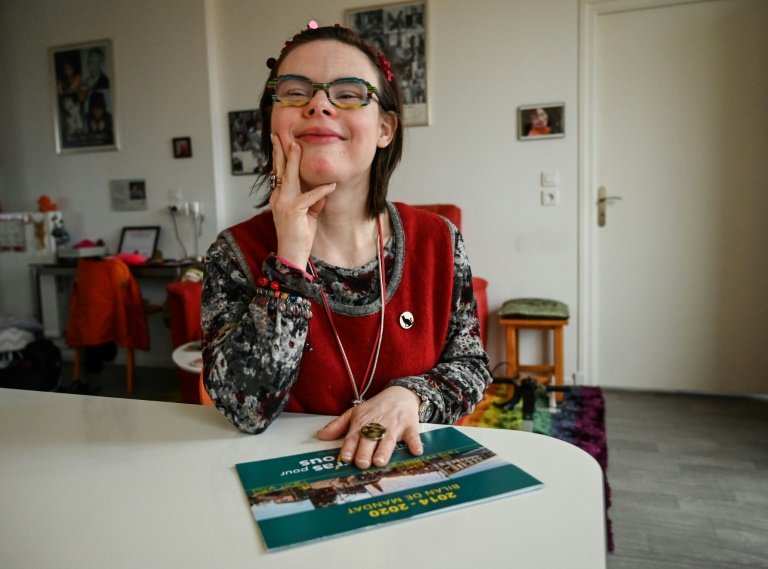 Besides her day job, Eleonore Laloux is involved with the Down Up association in her home town, and is spokeswoman for "Les Amis d'Eleonore" (The Friends of Eleonore), dedicated to helping people with mental disabilities / © AFP

Laloux already has an impressive resume, having worked for 14 years as an administrative agent at a private hospital.

On top of her day job, she is involved with the Down Up association in her home town, as well as the "Amis d'Eleonore" (The Friends of Eleonore) collective created by her parents, dedicated to helping people with mental disabilities.

In 2014, she published a book entitled "Triso et allors!" (Down Syndrome and So What!) about the obstacles she has had to overcome.

Laloux has fought long and hard to live a "normal" life, refusing to be defined by her handicap.

She went to a regular school, and left her parents' home eight years ago to live on her own.

"I do a bit of cooking, I check my mails... I like to feel resourceful," she said.

In her free time she likes putting on a DVD or listening to Bob Dylan, Blur and Radiohead.

"We have always wanted for Eleonore, who was born different, to be able to live like anyone else," her father Emmanuel Laloux, 66, told AFP.

"When you view a person through the prism of their inabilities... they will behave like a disabled person. But if you view them for their abilities, they can grow," he said.

Emmanuel Laloux said he backed his daughter's political ambitions on the proviso that her colleagues "truly take into account her needs in terms of intellectual accessibility".

Leturque said special provisions would be made for Laloux, who he said would be "accompanied" in her duties by Sylvie Noclercq, Arras' councillor for health and disability issues.

Macron hosted a national conference on disabilities this month, announcing that 15,000 assistants would be hired in the next two years to help handicapped children go to school.

According to government statistics, some 2.7 million people -- out of a French population of almost 67 million -- suffer a disability that results in some form of physical limitation.