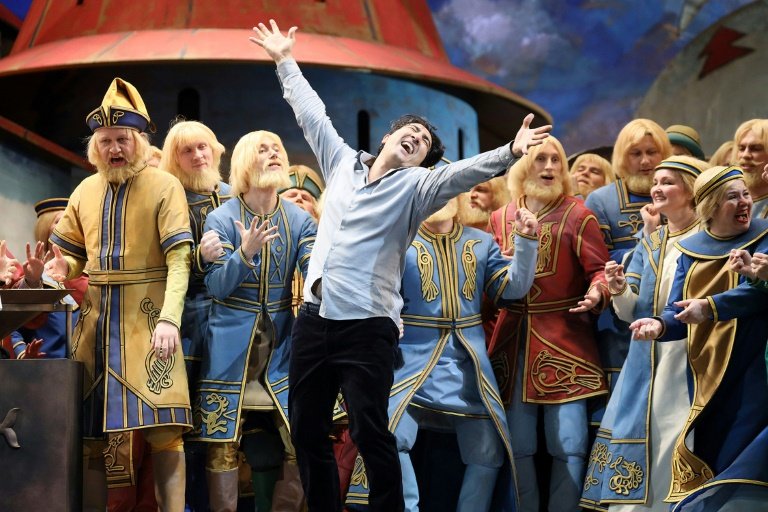 Opera director Dmitry Chernyakov, who has made a name for himself staging modern takes on Russian classics, has not worked in his hometown of Moscow for nearly a decade after scandalising local audiences. Until now.

Arguably the most famous Russian director working today, he unveiled a new interpretation of Rimsky-Korsakov's epic classic "Sadko" this month at the Bolshoi as the theatre seeks contemporary relevance while pleasing traditionalist audiences.

The production has won praise from many critics as a smart post-modern jab at Bolshoi's own institutional legacy.

Sergei Khodnev of Kommersant called it a "careful investigation" of the epic opera genre, an interpretation that is both sarcastic and nostalgic towards the legendary Bolshoi.

But critic Yekaterina Kretova panned what she called a "mediocre sham", writing in Moskovsky Komsomolets: "It's difficult to last four hours when there are lies and inauthenticity on stage."

While Chernyakov has a reputation for bringing Russian culture to the West, where he is known by the French version of his name, Dmitri Tcherniakov, his previous work in Moscow has generated palpable hatred among some music lovers.

The famed soprano Galina Vishnevskaya, who died in 2012, was particularly outspoken, condemning as "shameful" his pared-down 2006 production of Tchaikovsky's "Eugene Onegin" that marked an emphatic break from previous versions.

Meeting journalists ahead of the "Sadko" premiere, Chernyakov said he hoped his latest production would also "inspire debate and discussion".

"This opera has a false reputation of being something epic, far away and not about us," said the director, wearing tennis shoes and a tracksuit jacket.

"We're trying to distance ourselves from this cliche."

Steeped in Russian mythology, the 1896 opera tells the story of Sadko, a poor musician who embarks on an adventure, marrying Volkhova, the daughter of the Sea King, but eventually returning to his life on land and his wife Lyubava.

Instead of an epic protagonist, Chernyakov's Sadko is a neurotic modern man in jeans and Volkhova is a successful businesswoman looking to reconnect with her passionate nature.

The characters are sent into an amusement park populated with clone-like blond medieval Russians where the opera's plot twists and the love story are just a simulation of the original fairy tale.

Their wedding in the underwater kingdom is an endless procession of ridiculous fish creatures and giant floats that costume designer Yelena Zaitseva called "a combination of the Moulin Rouge and a kindergarten play" in an interview with Kultura television channel.

"Sadko" was once a popular part of the Bolshoi's repertoire.

Its 1936 staging reflected the cultural values of the Stalin era with a monumental set, massive chorus and positive hero.

"It was the aesthetic of the victory of socialism that echoed the previous imperial style," said opera historian Mikhail Muginstein of this "grand style" of Russian epic opera. 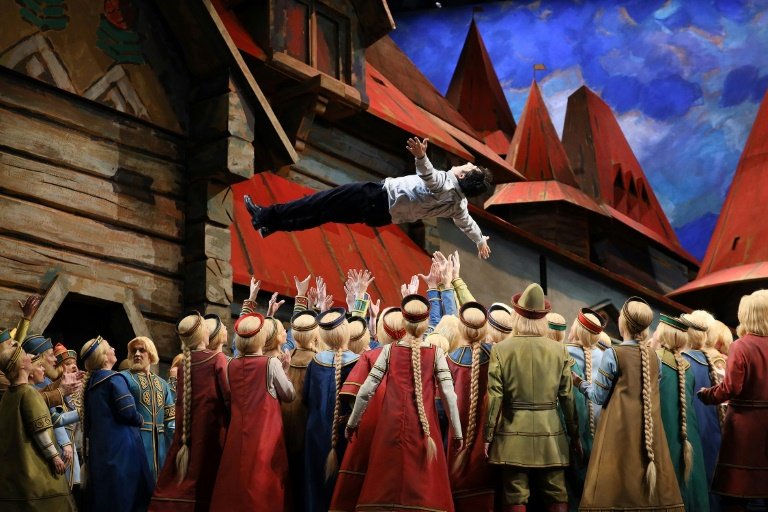 The opera is almost never staged in the West and gradually lost favour in Russia too, with the Bolshoi dropping it from its repertoire in 1984 / © Bolshoi Theatre/AFP

The opera, rarely staged in the West, gradually lost favour in Russia too, with the Bolshoi dropping it from its repertoire in 1984.

"That the Bolshoi has once more put on this juggernaut can only inspire awe and respect," Muginstein told AFP, calling the premiere "a huge event in our cultural history."

Regardless of the reaction at home, worldwide Chernyakov remains a "talented promoter of Russian opera", Muginstein said.

"Only a few Russian operas are staged abroad and it's difficult to imagine Rimsky-Korsakov there, but Chernyakov somehow manages to stage him," he said.

The director is the only Russian to have won the prestigious International Opera Award for director of the year, in 2013.

His 2019 staging in Belgium of "The Tale of Tsar Saltan", another little-known work by Rimsky-Korsakov, has been shortlisted for this year's awards.

Tapping Chernyakov may ruffle some feathers, but the Bolshoi's general director Vladimir Urin has pledged to keep educating audiences to be more tolerant of contemporary opera language.

"Nineteenth-century material can be completely reimagined, and we can try to speak in a modern language with the help of this material, which is what (Chernyakov) does," Urin told Kultura television in January.

"The Bolshoi Theatre must be a theatre that is alive and modern."