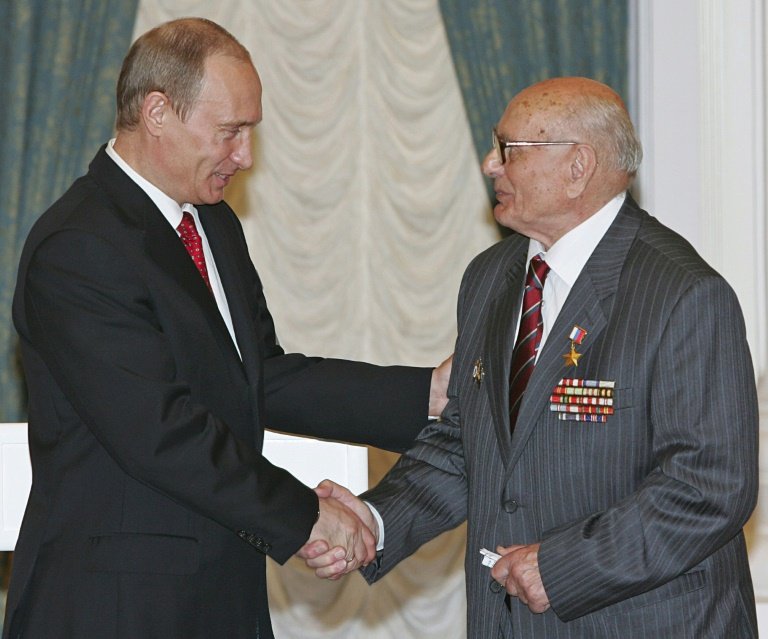 Alexei Botyan, who has died aged 103, was awarded a Hero of Russia Star award by Vladimir Putin in 2007 / © ITAR-TASS/AFP/File

Russia on Thursday announced the death at 103 of veteran Soviet spy Alexei Botyan, whom it hailed as a hero for "saving" the Polish city of Krakow from the Nazis, although Poland disputes Moscow's version of events.

According to the SVR's account, in January 1945, "Lieutenant Alyosha" -- as he was affectionately called by locals -- helped blow up a munitions depot containing explosives the Nazis planned to use to destroy a dam and flood Krakow.

The SVR said Botyan considered his role in helping save the picturesque city the crowning achievement of his life.

Putin awarded Botyan Russia's highest medal, the Hero of Russia, in 2007, telling the veteran: "Old Krakow -- Europe's most beautiful city -- was preserved for Poland and the entire world culture in many ways thanks to your personal courage."

Russia has played up Botyan's exploits in recent years under Putin's rule even though the story of his saving Krakow doesn't always align with other historic accounts.

Poland's post-war Communist authorities did not attribute Botyan a key role in their propaganda despite awarding him the Order of the Virtuti Militari, the highest honour for military feats.

"Polish historians generally question the Russian version of events, a version that appeared (only) when Vladimir Putin was in power," wrote daily Rzeczpospolita when Botyan was honored in Moscow on his 100th birthday.

Another Polish daily, Gazeta Wyborcza, said that in the Russian official narrative Botyan had replaced another Soviet agent, the Ukrainian Yevgen Berezniak, who was also hailed for his role in saving Krakow.

Born in 1917, Botyan grew up in a rural family in Poland in an area that is now part of Belarus.

When World War II broke out in 1939, he served in an air-defence unit of the Polish army. After his unit surrendered to Soviet troops, Botyan joined the Red Army and became a Soviet citizen, the SVR said.

After Germany invaded the Soviet Union in 1941, Botyan joined the NKVD secret police and was trained to conduct intelligence operations behind enemy lines. In September 1943, he oversaw an operation in the Ukrainian town of Ovruch that killed some 80 Nazi officers.

After the end of WWII Botyan worked as a secret agent on foreign missions, the SVR said.

Russia this year will hold a massive military parade for the 75th anniversary of Soviet victory over the Nazis as tensions run high between Moscow and Warsaw.

Putin recently accused Poland of being in cahoots with Hitler during World War II while not mentioning the secret Soviet-Nazi pact to invade and carve up Poland.