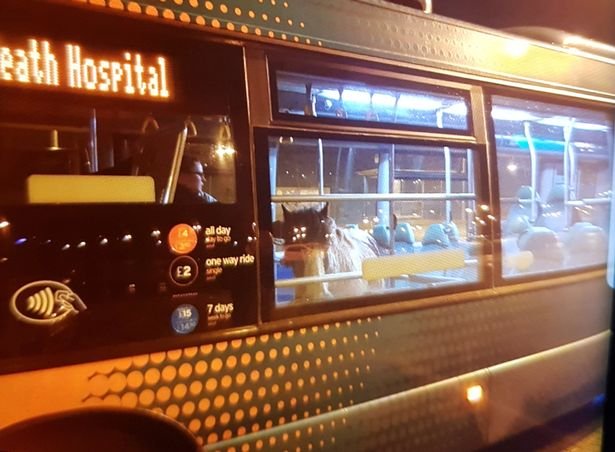 After being hit by two cars and a van the injured horse was taken onto a Cardiff bus, according to a report on Wales Online.

A spokeswoman for South Wales Police said: "During the incident, there were reports of collisions involving two cars and a van."

A loose horse on the 'mane' A48 Eastern Ave decided it wanted to 'stirrup' a little trouble but in doing so it risked falling 'foal' of the law.

It then decided to alight an @Cardiffbus
which was on it's way to the Heath Hostable!

Olivia Ryall (one of the women involved in the story) told Wales Onlines said she immediately slammed her breaks on to stop the car, and her friend, Harley Stephens, got out to stop the rest of the traffic.

"I just slammed the breaks on, everyone was just slowing down and indicating to drive around where the horse was. We were the only ones to stop so then everyone else around us did."

Stephens got out to try to deal with the situation.

"And then a bus stopped behind us, there was a queue of traffic and there were people trying to get around it going down the hard shoulder but we stopped them because we didn't want to spook it," said 26-year-old Olivia.

Expecting help from the bus driver and another passerby, Stephens was instead left to get the horse on board by herself, using the wheelchair access ramp.

Rumours that the horse was fined for not having a valid ticket are 100% untrue and the horse is in...wait for it....stable condition.