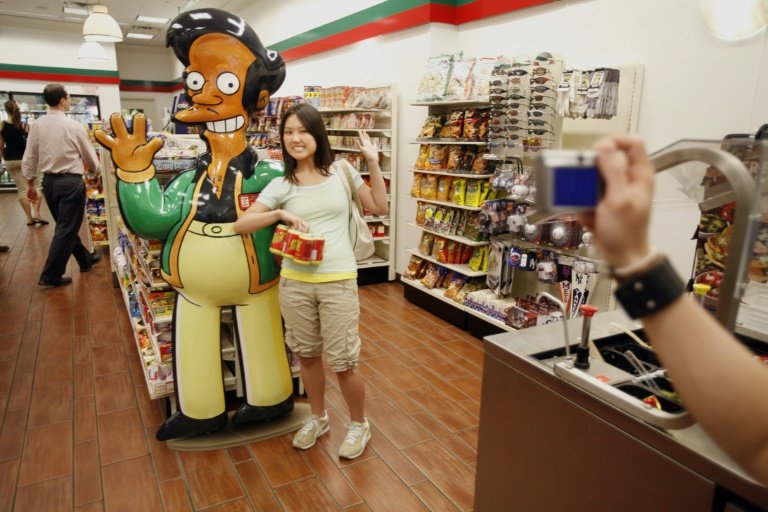 Apu Nahasapeemapetilon, manager of the show's Kwik-E-Mart, is voiced by white actor Hank Azaria, whose marked accent for the role has been criticized / © Getty Images North America/Getty Images/AFP/File

Apu Nahasapeemapetilon is the manager of the show's Kwik-E-Mart convenience store and a mainstay of the TV comedy, which recently celebrated its 30th year on air.

He is voiced by white actor Azaria, whose marked accent for the role has been criticized by viewers, who have also accused writers of using Indian stereotypes in their treatment of the character.

"What they're going to do with the character is their call," Azaria told US film news website SlashFilm on Friday. "It's up to them and they haven't sorted it out yet. All we've agreed on is I won't do the voice anymore."

Creators of "The Simpsons" found themselves under fire in late 2017 with the release of a documentary by comedian Hari Kondabolu, who interviewed fellow entertainers of Indian and South Asian origin to document their feelings about the character.

Both Azaria and "Simpsons" creator Matt Groening refused to appear in the documentary to answer questions.

But Azaria later told a reporter from the TMZ celebrity website that Kondabolu "made some really interesting points" and "gave us a lot at 'The Simpsons' to think about."

"The Simpsons" stars Homer, the family patriarch working for a nuclear power station, his wife and voice of reason Marge, and children Bart, Lisa and Maggie.

In its early years, the animated comedy regularly pulled in more than 15 million viewers and had double that -- 33 million -- for its most-watched episode in 1990.

It became so popular that references to the show have formed part of pop culture.

Declining audience figures had led to fears that it would not be renewed, but Fox committed to continue "The Simpsons" until at least a 32nd season in 2021.