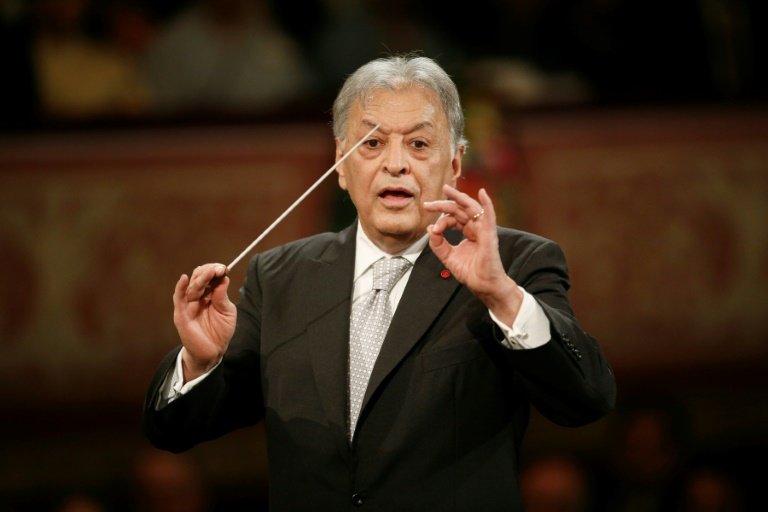 Star conductor Zubin Mehta took the stage in Tel Aviv on Sunday for an emotional final performance as music director of the Israel Philharmonic, retiring after 50 years with the orchestra.

The 83-year-old, who underwent treatment for a cancerous tumour last year and walked with a cane, earned a long standing ovation from the packed house as he said "goodbye to my family," as he put it in an interview beforehand.

The final performance included Liszt's Piano Concerto No. 2 and Mahler's Symphony No. 2, known as Resurrection, at the Mediterranean city's Charles Bronfman Auditorium.

"From my heart, what this orchestra has given me .. not only this one but all the generations before them. I cannot begin to even describe what I have learned with these musicians," he told the audience during the intermission.

At the end of the performance, flower garlands were placed around the necks of Mehta and his wife, who watched from the audience.

Mehta, who will be succeeded by 30-year-old Lahav Shani, was also named the orchestra's musical director emeritus.

The charismatic maestro has famously conducted in poignant settings, including when he led a group of Israeli and German musicians near the site of the Nazis' Buchenwald concentration camp in 1999, where he also conducted Mahler's Resurrection Symphony.

He also famously rushed to Israel to perform in support of the country during the 1967 Six-Day War, though he would later say he opposed the settlement building that followed in the occupied West Bank.

"You're not usually tongue tied for words, but at this moment I'm feeling so strongly," he said in an interview aired during Sunday's intermission by medici.tv, which streamed the concert live.

His official biography says that during his tenure, "Mehta has conducted over 3,000 concerts with this extraordinary ensemble including tours spanning five continents."

He has simultaneously had other strings to his bow.

During his time in New York, he conducted more than 1,000 concerts, according to the New York Philharmonic website, which says his tenure "was the longest in the orchestra's history."

He has conducted other orchestras around the world, including in Austria, Germany and Italy.

Born in Mumbai, India in 1936, Mehta grew up in a musical environment.

His father, Mehli Mehta, founded the Bombay Symphony and was music director of the American Youth Symphony in Los Angeles.

Together with his brother Zarin, he is a co-chairman of the Mehli Mehta Music Foundation in Mumbai, where children are educated in western classical music.