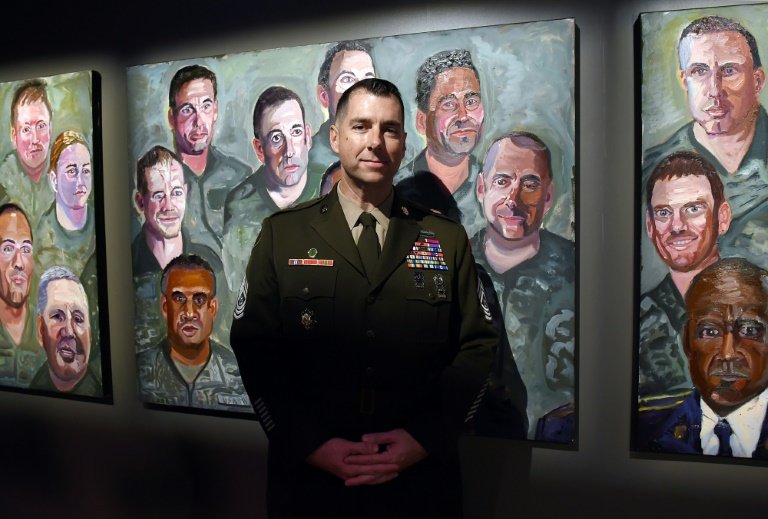 Command Sergeant Major Brian Flom, pictured next to a painting of himself by former president George W. Bush, was wounded in the face by a rocket attack in Iraq in 2007 / © AFP

In some paintings, the wounds are plain to see: an arm or leg lost to war. In others, the injuries that US veterans suffered are hidden from view.

But all of the works by former president George W. Bush -- painted as a tribute to the men and women he sent to war -- reflect the human toll of his decisions as commander-in-chief.

Command Sergeant Major Brian Flom was wounded in the face by a rocket attack in Iraq in 2007.

"That was the easy part," he told AFP, standing beside a painting in which he appears with fellow military personnel, one of dozens of works on display at Washington's Kennedy Center.

"The challenging part was the TBI (traumatic brain injury) and the post-traumatic stress that accompanied a lot of time spent in a combat zone."

Recovery is "still going on -- it's an everyday process, right, and some days are better than others."

Flom was selected to go on a mountain bike ride with Bush in 2015, and has now met him "many times," including dinner at the former president's house.

Bush "decided one day to paint people that he had a connection with and meant something to him, and here I am." 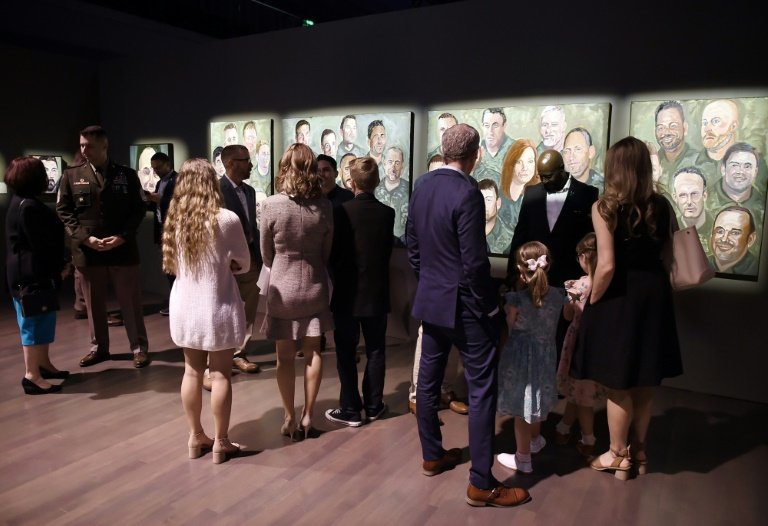 George W. Bush took up painting after leaving office in early 2009, and has sought to help veterans who served in the wars that defined his presidency / © AFP

Bush ordered the American military into Afghanistan following the September 11, 2001 attacks and launched the invasion of Iraq to topple dictator Saddam Hussein in 2003.

More than 3,500 American military personnel have been killed and more than 32,000 wounded in hostile action in Iraq, while combat in Afghanistan -- a war that turned 18 on Monday -- has left nearly 2,000 dead and more than 20,500 wounded.

Bush took up painting after leaving office in early 2009, and has sought to help veterans who served in the wars that defined his presidency.

"I painted these men and women as a way to honor their service to the country and to show my respect for their sacrifice and courage," Bush said in a quote featured at the exhibition, which is titled "Portraits of Courage: A Commander in Chief's Tribute to America's Warriors."

"Everybody that was painted... has participated in one of two events that the president hosts every year with wounded veterans and their families" -- a bike ride and a golf tournament -- said former US Army sergeant first class Michael Rodriguez. 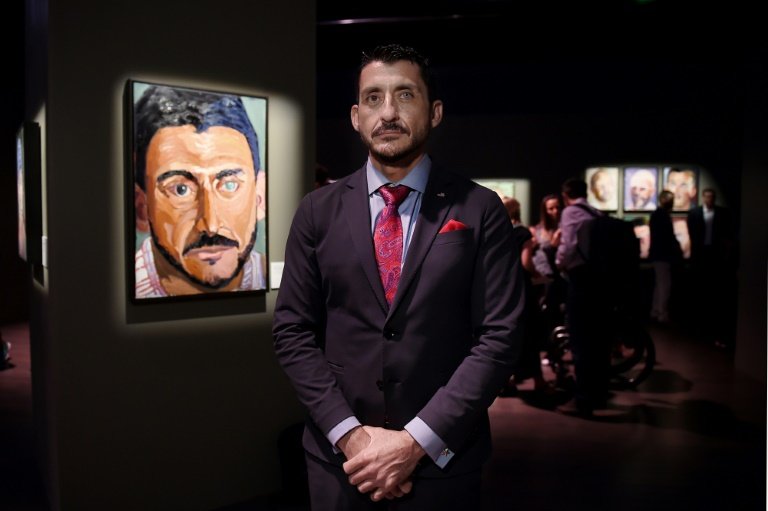 Rodriguez, who is pictured in a standalone portrait by Bush, deployed nine times during his 21 years in the military and was wounded several times, "mainly traumatic brain injuries" from bomb blasts.

He met Bush during a mountain bike ride in 2014, and was later selected for an advisory council on how to better serve post-9/11 veterans and their families, getting to know him personally.

Rodriguez said he has no anger toward Bush over the injuries he sustained.

"During my 21 years of service, I worked for four different presidents. I would never assume to... be that arrogant to think I... had all the information to make the decisions they made," he said.

He has "never, ever been upset at any of our presidents." 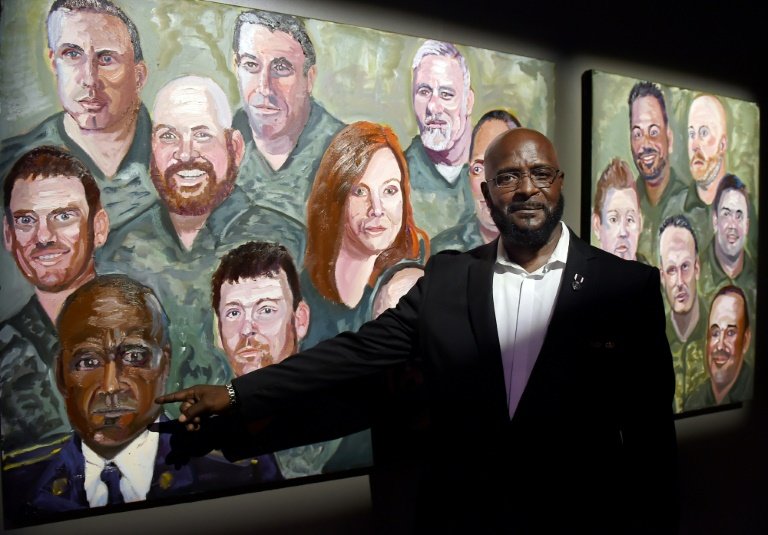 Former US army sergeant DeWitt Osborne, who was wounded by a bomb blast near Baghdad in 2006, points to a painting of himself by former president George W. Bush / © AFP

Former US army sergeant DeWitt Osborne is another veteran painted by Bush, like Flom appearing in a montage of military personnel.

He was wounded by a bomb blast near Baghdad in 2006 that injured his right shoulder, right foot, fractured vertebrae and caused traumatic brain injury as well as post-traumatic stress.

Osborne said he still follows events in Iraq, where the US withdrawal was followed by a rise in violence, a jihadist takeover of swathes of the country and years of battles to push the militants back.

Protests have recently erupted in which more than 100 people have been killed over a week.

"It's a shame," Osborne said of events there, expressing hope that things get better. "We as a country (have) shed a lot of blood and tears and work over there."

"I wish it was different."