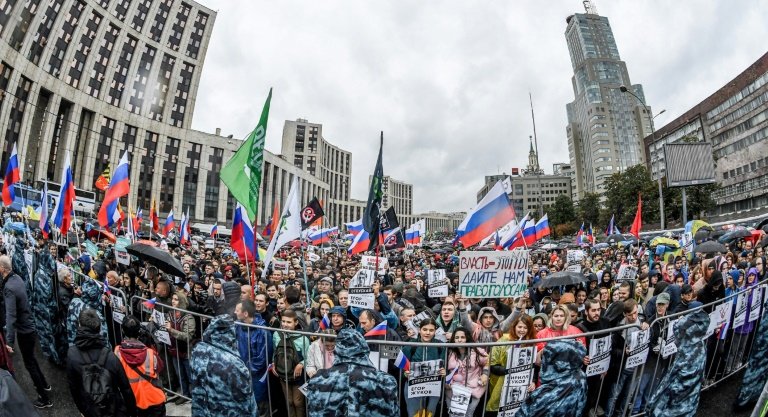 Russian celebrities have launched a solidarity campaign in support of a young actor who they say was wrongfully jailed for a crime amid a crackdown on the opposition.

On Monday, a Moscow court sentenced 23-year-old actor Pavel Ustinov to three and a half years in prison for violence against police at an opposition protest even though he claimed he was simply a bystander.

His sentencing sparked particular outrage because the court refused to consider video footage that showed police in an apparently unprovoked attack on the actor.

"I think that this is a completely trumped-up case," film actor Alexander Pal said in a video posted on Instagram.

Pal, one of the figures who kickstarted the social media campaign, said the video proved his innocence.

Footage from the scene showed several police in full riot gear lunging at Ustinov -- who was standing with a phone in his hand near a metro station -- and beating him with batons.

"We have to stop this, this is against all laws," actress Yulia Peresild said.

The stars, most of whom steer clear of politics, compared Ustinov's case with the case against journalist Ivan Golunov detained in June on trumped-up drug charges.

He was freed after an unprecedented campaign of solidarity which saw three major newspapers publish the same front page with the headline "I am/we are Ivan Golunov".

In a similar vein, dozens of celebrities and lesser known figures posted "I am/we Pavel Ustinov" on their Instagram accounts.

Sergei Lazarev, a pop star who has twice represented Russia at the Eurovision Song Contest, also posted in support of the campaign.

In a video, Maxim Galkin, a Kremlin-friendly impersonator and comedian, called the case against Ustinov a "colossal overkill" that deals a major blow to the reputation of courts, law enforcement agencies and authorities.

Investigators said Ustinov violated public order during an unauthorised rally on August 3 and put up resistance during his arrest. As a result, a policeman sprained his shoulder.

Ustinov has insisted on his innocence, saying he was simply a passerby.

His sentencing brought to six the number of people jailed for taking part in a recent wave of anti-government demonstrations.

Tens of thousands of people took to the streets of Moscow after authorities refused to allow prominent opposition candidates to stand for the city parliament in September 8 elections.