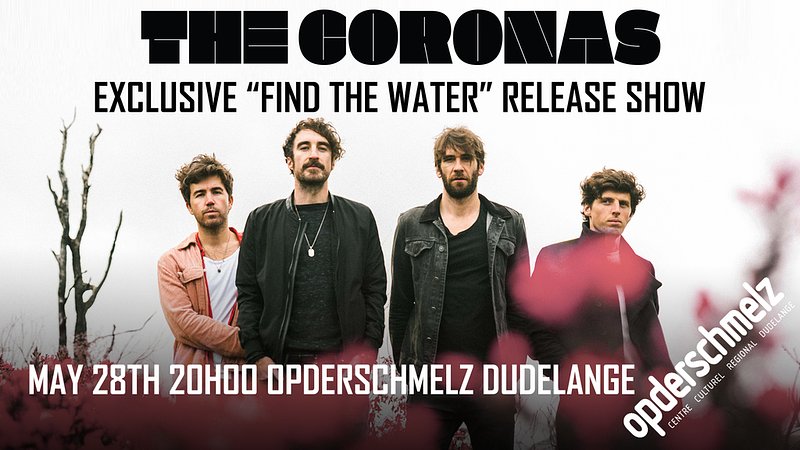 On Tuesday 28 May 2019 at 8pm the band The Coronas will present their new single "Find the water" at the Kulturzentrum opderschmelz in Dudelange.

THE CORONAS is a four-man indie rock band from Terenure, Dublin. They were founded under the name "Kiros" when the musicians were just 15 years old. Since 2003, the four friends, who have performed together since their high school days, have reliably brought each of their releases high into the Irish charts. Their lively alternative rock with undeniable pop appeal has also sparked off in the USA, where the young Irish people received enthusiastic reactions during their tour. The first album "Heroes or Ghosts" was released in October 2007 and reached number 24 in the Irish charts. The second album "Tony Was An Ex-Con" was released on September 25th, 2009 and reached number 3. It won the 2010 Meteor Award for best album, ahead of U2 and Snow Patrol. In 2011 the band released their third studio album Closer to You, produced by Tony Hoffer (The Kooks). In 2017 they released 'Trust the Wire' - the first album on their own label, and went on to a 2018 tour across America, Australia, Asia, and Europe.

‘Find the Water’ marks the beginning of a new campaign for The Coronas, the follow-up to their 2017 No.1 album. The new campaign will culminate with the multi-platinum, arena-conquering four piece releasing their sixth studio album in March 2020. Produced by Rob Kirwan (Hozier, PJ Harvey, Local Natives, Editors, The Horrors) ‘Find the Water’ sees the band move into new musical territory, as lead singer Danny O’Reilly explains:

“Musically ‘Find the Water’ is unlike anything we’ve done before - melodically; the vocal delivery; even the arrangement is unusual for us, but yet it was one of those songs where we were all on the same page right from the start and it came together very quickly, which is always a good sign. And out of the 4 songs we recorded with Rob in LA, ‘Find the Water’ felt like the right jumping off point for what the album is going to be.”

You are cordially invited to attend this extraordinary event, because RTL has tickets that we would like to offer you.

Try to answer the following questions correctly and maybe you are one of the lucky winners who can be part of this exclusive event.