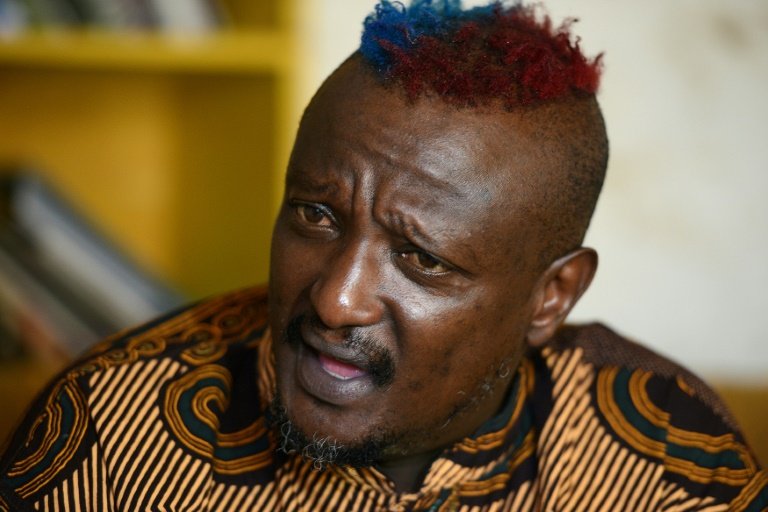 Binyavanga Wainaina, pictured in an AFP interview in January 2014, shortly after he declared that he was gay / © AFP

Internationally-renowned Kenyan writer Binyavanga Wainaina, whose high-profile coming out in a country that criminalises homosexuality made him a revered figure for gay rights in Africa, has died aged 48, his publishing house said Wednesday.

The celebrated author came to world prominence with the Caine Prize for African Writing in 2002.

He died just days before Kenya's High Court was scheduled to deliver a long-awaited ruling on whether to abolish colonial-era anti-gay laws.

"He passed on some time last night," Tom Maliti, the chairman of the Kwani Trust, a Nairobi-based publishing house founded by Wainaina, told AFP.

Wainaina had suffered a stroke in 2015 and was living with HIV.

His brother James told Capital News that messages of condolence were pouring in from around the globe.

"The wound is still fresh, but we have received an outpouring of messages, from the people across the world, we are greatly comforted by them."

At times a divisive figure in his native Kenya, where same-sex relationships are outlawed, Wainaina sparked huge debate in 2014 with his bombshell short story entitled "I am a Homosexual, Mum".

"I, Binyavanga Wainaina, quite honestly swear I have known I am a homosexual since I was five," he wrote in the explosive self-published story addressed to his late mother.

It was imagined as a lost chapter to his own acclaimed memoirs, "One Day I will Write about this Place", which appeared in 2011 but failed to mention his sexuality.

The influential literary figure said he timed his public announcement with the passing of controversial anti-gay legislation in Nigeria, a country he admired and considered his second home.

"So as far as the emotional side was concerned, I did that a long time ago, this is more a political act," Wainaina told AFP in a January 2014 interview.

He was flooded with messages of support at the time, and was named among the world's most influential people that year by Time Magazine.

But he also became a lightning-rod for criticism across sub-Saharan Africa, where most countries have laws penalising same-sex relationships.

"A gallant human rights defender who stood up and fought for the dignity and rights of LGBTQ community and others. Rest in power," Amnesty International's local office posted on Twitter.

In 2016, timed around World AIDS Day, Wainaina announced he was HIV positive.

Last year he unveiled plans to marry his long-term partner in South Africa.

His work received wide attention and praise, including a satirical essay "How to Write About Africa".

Kenya's high court is scheduled to issue a ruling on Friday on the country's anti-gay laws, although the LGBT community fears a delay.

The court has already postponed its decision once, on the grounds of a heavy workload, prompting dismay from a persecuted community which has fought for years to be accepted.

Activists believe Kenya has a chance to blaze a trail in a continent where homophobia is virulent in many communities.

Twenty-eight out of 49 countries in sub-Saharan Africa have laws penalising same-sex relationships, according to Human Rights Watch (HRW).

Angola, Mozambique and Seychelles have scrapped anti-gay laws in recent years, while Chad and Uganda have introduced or toughened legislation.

The death penalty is on the books, under Islamic sharia law, in Mauritania, Sudan and northern Nigeria, although there have been no known executions in recent times.

In southern Somalia, gay men are believed to have been put to death in territory ruled by the Al-Shabaab jihadist group.