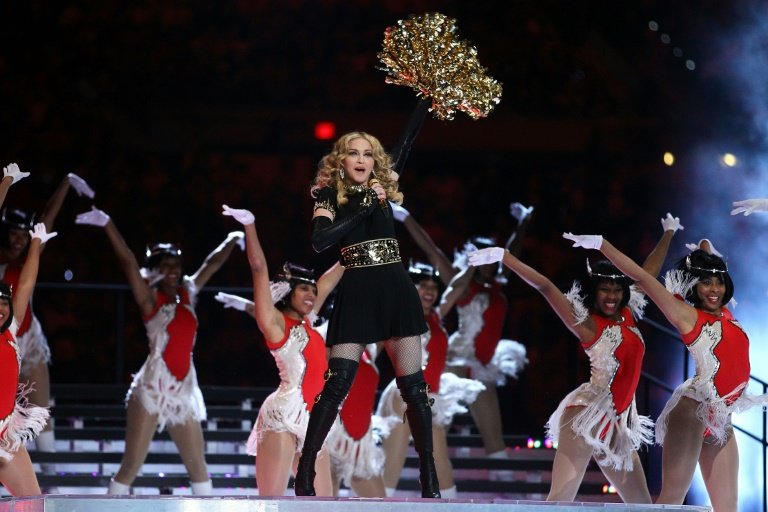 Madonna on stage in Indianapolis in February 2012: the singer says she is determined to play at the Eurovision finals on Saturday in Tel Aviv despite calls for a boycott from pro-Palestinian groups / © GETTY IMAGES NORTH AMERICA/AFP/File

Pop icon Madonna said Tuesday she is determined to perform at the finals of the Eurovision Song Contest in Tel Aviv this weekend, despite calls to boycott her for playing in Israel.

"I'll never stop playing music to suit someone's political agenda nor will I stop speaking out against violations of human rights wherever in the world they may be," the singer said, in a statement carried by US media.

Madonna's producers said in April the star would sing the Grand Finale of the music contest in Tel Aviv, which was designated the host city after Israeli singer Netta Barzilai won in Portugal last year.

But Madonna's participation unleashed a storm of protests from the Boycott, Divestment and Sanctions (BDS) movement, which has for years been pushing for investors and artists to shun Israel for its decades-long occupation of Palestinian territories.

"My heart breaks every time I hear about the innocent lives that are lost in this region and the violence that is so often perpetuated to suit the political goals of people who benefit from this ancient conflict," said the legendary performer, whose string of hits in the 1980s and 90s included "Material Girl" and "Like a Virgin."

"I hope and pray that we will soon break free from this terrible cycle of destruction and create a new path towards peace."

However, the Eurovision organizers said the 60-year-old's participation was not yet signed and sealed, and that the final contract for her participation had yet to be finalized.

"We are in a situation now that is a bit strange," said Eurovision's executive supervisor, Jon Ola Sand, at a news conference in Tel Aviv.

"We have an artist who would like to participate in the Eurovision Song Contest, and who we would love to welcome on that stage, but for that we need to have the framework secured. If there is no signed contract this week, she will not be on the stage."

Israeli media said preparations for the star's performance were going ahead as scheduled, with a first shipment of equipment having arrived in Israel on Monday.

Madonna and her entourage of 135 people, including the rapper KoVu, 40 backing singers, 25 dancers and a team of technicians, were expected to fly in on Wednesday, according to reports citing the Israeli-Canadian billionaire Sylvan Adams, said by the press to be footing a large part of the bill to bring Madonna to perform in Israel.

The semi-finals of the contest are due to take place on Tuesday and Thursday this week, with the Grand Finale on Saturday.

Israel has won the Eurovision Song Contest four times, hosting twice in Jerusalem in 1979 and 1999.