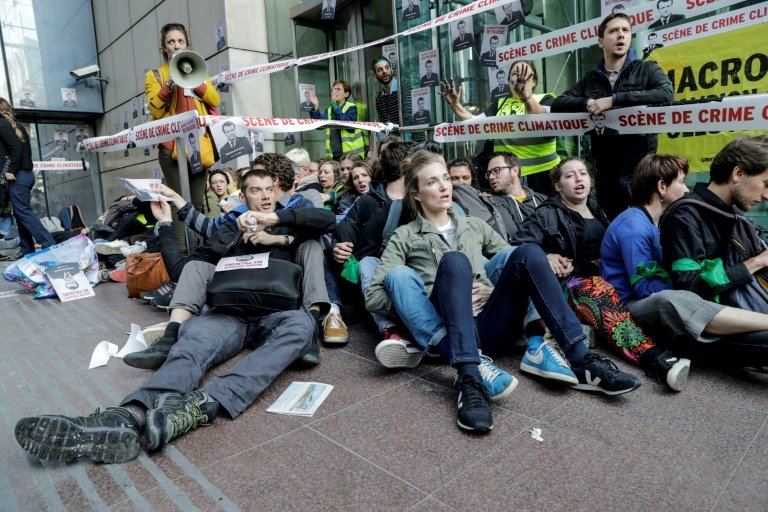 Hundreds of French activists on Friday staged a sit-in outside top energy companies in Paris, describing France as the "republic of polluters", as part of a international civil disobedience campaign on climate change.

Hundreds of French activists on Friday staged a sit-in outside top energy companies in Paris, describing France as the "republic of polluters", as part of a international civil disobedience campaign on climate change.

Some two thousand environmental activists in total assembled at the La Defense business district in a bid to block access to to the headquarters of energy giant Total, electricity firm EDF as well as bank Societe Generale and France's Ministry for Ecological Transition.

Protestors rallied around the slogan, "Block the Republic of Polluters" and held banners bearing the face of President Emmanuel Macron and the message, "Macron, President of polluters".

Some lay on the ground, in what they said was an action symbolising a "climate crime scene".

The demonstration, a joint initiative of ANV-COP21, Greenpeace and Les Amis de la Terre, comes at the end of the "International Week of Rebellion" launched by Extinction Rebellion, the climate change pressure group using civil disobedience to demand action over climate change from politicians and governments worldwide. 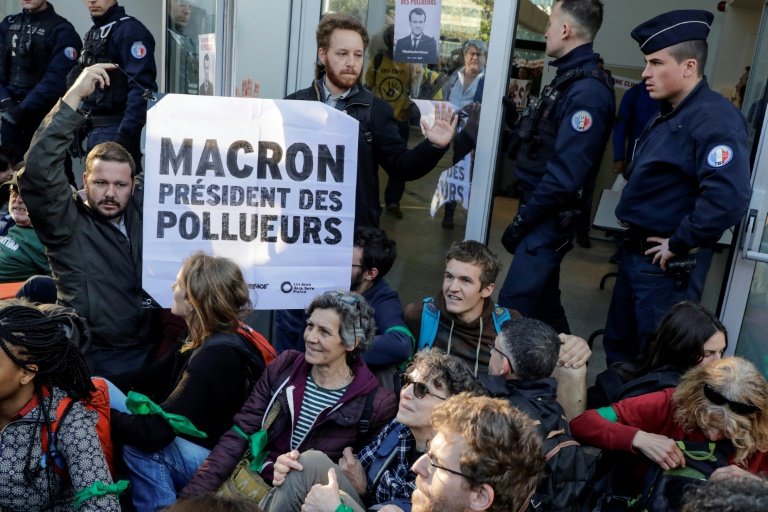 Clement Senechal of Greenpeace, told AFP that the protest outside Total was symbolic as the company was the "factory of climate change".

The French multinational ranks among the world's top 20 CO2-emitting companies.

"We have come out to denounce the policy of Macron and show that politics in France happens here and not at the ministry," Cecile Marchand, of Les Amis de la Terre, told the crowd.

But in a message on Twitter, France's minister for ecological transition Francois de Rugy said the activists had "got the enemy wrong... we are acting!"

Total CEO Patrick Pouyanne meanwhile defended the strategy of the energy giant saying the main demand of the population was to have "access to more energy, affordable energy and that this energy is clean".

A window was broken at the Societe Generale tower and tear gas cannisters were briefly deployed by police taking up positions inside the building, according to an AFP photographer.

Their action came after climate change activists brought parts of London to a standstill in a week of demonstrations that have so far led to more than 400 arrests.

Paris was in 2015 the venue for the United Nations Climate Change Conference (COP21) which forged a historic agreement on limiting climate change. However activists doubt the commitments will be met.