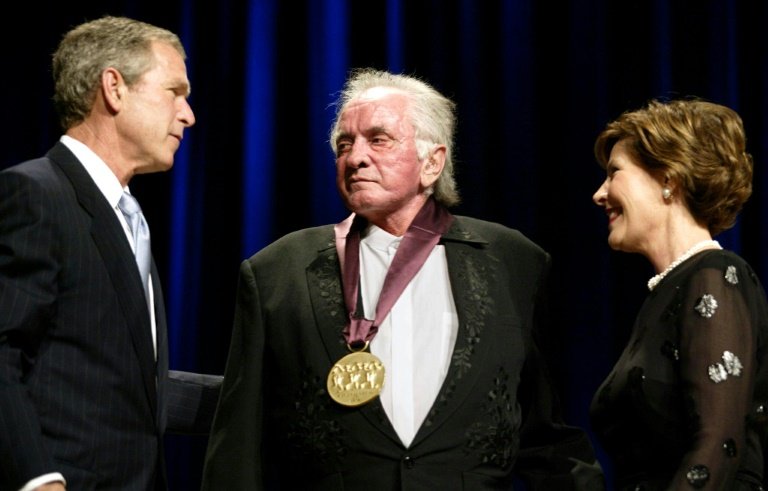 Country legend Johnny Cash, who will be honored with a statue representing Arkansas in the US Capitol, is congratulated on an award in 2002 by then president George W. Bush and first lady Laura Bush / © AFP/File

Music legend Johnny Cash will be immortalised with a statue in the US Capitol as his native state of Arkansas replaced divisive figures associated with white supremacy.

Music legend Johnny Cash will be immortalized with a statue in the US Capitol as his native state of Arkansas replaced divisive figures associated with white supremacy.

Each US state sends two sculptures to the Statuary Hall, a grand gallery leading to the Capitol's Rotunda, and the century-old representatives of Arkansas have become increasingly controversial amid a nationwide push to bring down symbols of the racist Confederacy.

Arkansas announced that one of its two statues -- traditionally in white marble -- would depict "Man in Black" Cash, whose songs of outlaws, prisoners and his own spiritual journey, sung in a forbidding baritone to a hard-edged country guitar, made him an icon across genres.

Cash, who died in 2003 in Nashville, will be joined in the Statuary Hall by Daisy Bates, a crusading African American civil rights journalist, after a vote by the Arkansas Senate.

Bates helped guide the Little Rock Nine, black students who defied threats and enrolled in an all-white school in the Arkansas capital in 1957 after president Dwight Eisenhower ordered the 101st Airborne Division to enforce a Supreme Court decision.

Arkansas Governor Asa Hutchinson, a conservative Republican, hailed Bates as an inspiration and called civil rights "an essential part of our story that says much about courage and who are as a state."

He did not directly disassociate Arkansas from the two existing figures honored at the Capitol but said in a weekly address, "Most everyone who was involved in the discussion agreed we needed to update the statues with representatives of our more recent history."

The statues to be removed depict James Paul Clarke, a US senator and Arkansas governor who strongly pushed segregation a century ago, and Uriah Rose, a lawyer who backed the Confederacy.