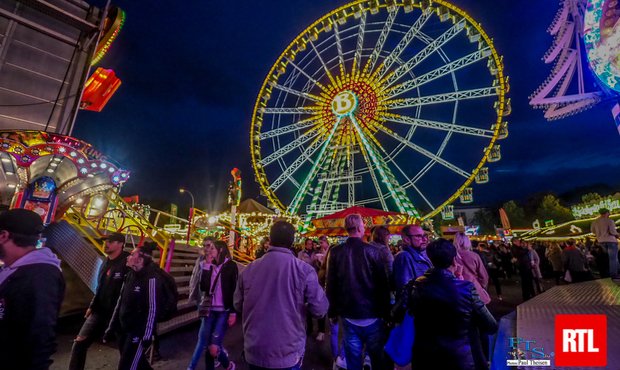 Nearly, but not quite, everything you need to know about the Schueberfouer.

Very difficult to pronounce. It’s also an excuse to act like a kid again and pay just a little bit too much for food that probably shouldn’t taste as good as it somehow does.

Why should I know about it?

This is the 678th edition, which means it’s been running since 1340. That alone is pretty impressive and should warrant a visit. It’s also pretty fun, and gives you the opportunity to blend in with the Luxembourgers as long as you spend a bit of time practicing the pronunciation of schueberfouer and gromperekichelcher.

Go on then, tell me more.

Sure! The history of the ‘fouer’ goes back to 1340 and John the Blind, then Count of Luxembourg, who decided that the Grand Duchy needed an 8-day market to celebrate Saint Bartholomew’s Day. In earlier days the aim of the fouer was to give Luxembourg an economic edge as a trade hub, and take advantage of its strategic location between Italy and Flanders. With the advent of the industrial revolution, however, the trade side of things became less vital and the fouer began its transformation into an annual funfair.

It’s been held at the Glacis since 1893, and is now one of the biggest events in the ‘greater region’, and attracts some 2 million visitors per year. This year there will be some 23 rides for adults, 20 for children, 69 game stalls, 15 restaurants, 35 snack vendors, and 18 stalls aimed at satisfying your sweet tooth.

It's a good idea to bring (plenty of) cash, and you will definitely want some Äppel Kompott with your Gromperekichelcher!

Great for: family fun, gromperekichelcher, a night out.

Not so good for: your savings account, motion sickness, promoting international trade.