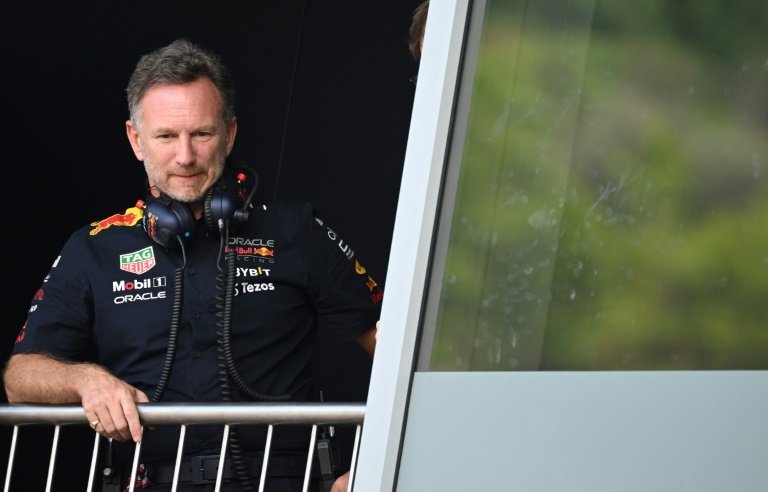 Horner, whose team lead both F1 world championships, told a news conference at the British Grand Prix it was already too late in the current season to intervene and make changes.

But two days after ruling body International Motoring Federation (FIA) issued guidance notes about a 'porpoising technical directive' to be launched at the French Grand Prix (July 24), Mercedes made clear they are in favour of moves to eliminate the 'bouncing' issues.

The directive will introduce a 'bouncing' limit to be monitored using a metric that will measure vertical accelerations, 'plank' (a device carried in the floor of cars) wear and flexibility.

"I think that it's too late in the day to be introducing changes for next year," said Horner.

"We have a governance for that. And the costs involved -- sometimes as unintended consequences of changing complete philosophies -- will affect what you carry over to next year.

"This will affect design and development. The most important thing, and the biggest way to achieve stable costs, is stability."

He forecast that without interference from the FIA, the teams would solve the problems themselves.

"The cars will converge," he explained.

"You can see it already. Some cars are looking more familiar! I think that will continue over the next six to nine months.

"So the important thing is not to 'dick' with it -– just leave it alone and the teams will sort it out."

Horner was backed by several other team bosses who were not keen on seeing the FIA interfere with the regulations or making changes for 2023.

"At the end of the day, the most important thing for us is stability," said Alfa Romeo team chief Fred Vasseur.

Mercedes technical director Mike Elliott conceded that his team suffered severely from bouncing and said he was open to change.

"The drivers are saying it's uncomfortable and it's not safe for them when there's heavy bouncing," he said.

"The difficulty is that these cars were designed around a 'ground effect' set of rules to try and improve overtaking…. The question is -- can you maintain some of that and move away from the bouncing?"

He added that after studying the latest draft technical directive there remained a lot of work to do.

"From what we've heard from the FIA, I think it's something they're going to have to sort of work on and build to work out how it's going to work pragmatically," he said.