Ahead of their upcoming show at Rockhal (promoted by den Atelier), RTL Today Radio's Stephen Steps Lowe got to natter with Zach Blair of the formidable Rise Against.

Formed back in 1999....yep, LAST CENTURY, Chicago's Rise Against remain one of the most vital voices in punk. Their return to Luxembourg on Tuesday 7 November is highly anticipated. The outfit are on tour to support Nowhere Generation II: a propulsive, five-song follow-up to last year's Nowhere Generation, a study of a generation younger than them struggling to find a path forward in an increasingly inhospitable world.

RTL Today Radio's Stephen Steps Lowe (host of The Lunchbox) got on the Zoom call to chat with Zach Blair, guitarist and vocalist as UK met US. This is a slice of how that conversation went.

Stephen Steps Lowe (S): If push came to shove and no roadie is available for you, there's no guitar technician. How quickly can you change a guitar string?

Zach Blair (ZB): Oh, that's a great question. Very quickly. I got very good at sort of troubleshooting stuff on my own because the way we came up. I wasn't in Rise Against in the 'van days', but I joined seven years after they started. But because I had the background of punk rock and metal and stuff, playing in the band GWAR for a long time where we didn't have a guitar tech, and was changing my own strings in a big rubber monster costume. There was a lot of band touring and a lot of doing it yourself, and I wouldn't trade that for the world. I'm really glad that I sort of had that background, but that included troubleshooting, everything. So you had to kind of get a little bit of an understanding of everything. Like your tubes go out, what do you do? Of course, your string, the neck, and your guitar is blowing out you have got to figure that out. So I'm glad I did that. I definitely didn't learn as much as some guys that I know. There are guys out there than can rebuild amps and everything... that goes over my head. I don't know about that shit, but yeah, I can do it. I'd say I'm a good...I don't know, I could probably change a string, in about 30 seconds.

As far as 'woke culture' becoming like this bad thing, specifically over in the States, over here by the political right, well, I say 'bring it on'

(S): How do you keep a band's signature sound but still push on to try and stay fresh? Because people's attention spans are dwindling.

(ZB): Oh, my God, you're telling me. That's also a great question. You know, with our band, no matter what we do or try, if we cover a song or whatever we do, we just sound like our band, the four of us, the way we sort of play together. And I think that's not patting ourselves on the back too much, but I think that's the sort of hallmark of a great band. And, you know, with the genre, that Rise Against sort of came up with, that was definitely prevalent. A lot of those bands definitely sounded very similar. And I've always attributed a lot of our sort of sound to Tim's voice. Tim has such a discernible, amazing voice. I'm such a huge fan of him and what he does, and we've been really lucky to have him as our singer or songwriter and all that. So I think that's what I would attribute it to. It's just the way we all sort of work together that keeps us sounding the way we do.

(S): As a band that has been and continues to be outspoken on sociopolitical things, is it harder to voice an opinion in the days of cancel culture?

(ZB): No, because I think, you know, and this is my personal view, I think those moments should have happened a long time ago. People should have been called out on the awful things they've gotten away with, and what they said a lot sooner, and I'm glad that it is now. It just keeps you in check, basically, so you're not hurting someone's feelings. As far as 'woke culture' becoming like this bad thing, specifically over in the States, over here by the political right, well, I say 'bring it on'. I think there's still definitely a way to get your point of cause to be political and say what you need to say and also be a caring, mindful human being that respects other people. There's a way to do it.
(S):How different is your approach, then, to taking stage today? That it might have been ten or 15 years ago

(ZB): I think it's very similar, and I think it should be very similar. It's really easy to, like I said, to take things for granted or to just phone it in, and I don't think our band does that. I think it's really important to take the stage the exact same way you took it when you were young and hungry and you had nothing, you know, to make a band happen, at least when we were coming up. I don't know how you do it now, but you had to put your shit in storage and get in the van and leave and not see your house or your loved ones for a really long amount of time. But you wanted to do it. You were so excited to do it. That was all, you know, it was the greatest adventure in the world, and you were so juvenile and joyful in every show, it was this great thing. I think when a band loses that, it's very noticeable. It's palpable. And I don't think our band has, and I don't think I ever do. So I think the key is to really try to channel who that person was every time you take the stage.

Click the below image to hear the interview in full. Rise Against play Rockhal (promoted by den Atelier) on Monday 7 November - WIN TICKETS by telling the RTL Today Radio Crew the name of the band which Zach Blair used to play in (it's in the interview....). Send your answer, and your name, to the Studio WhatsApp on +352 621 52 5000. 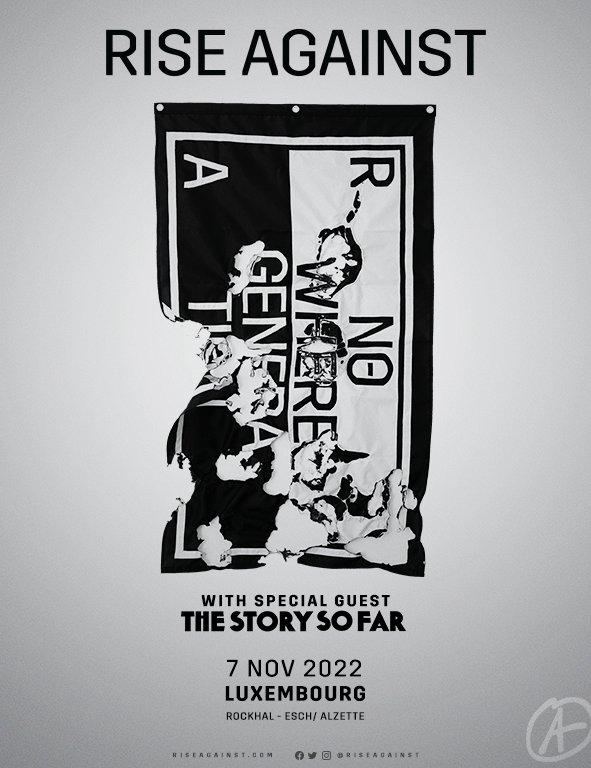