Ahead of their show at Rockhal (promoted by den Atelier) on Tuesday 8 November, RTL Today Radio’s Stephen Steps Lowe got a chance to chat with one of the most unique voices in music still working today.

After negotiating a couple of minor technical hurdles and on a phone line that sounds like centipedes in Doc Martins are tap-dancing on thumbtacks, we get to speak to an artist who first came onto the scene in 1985 and quickly went on to become one of the biggest acts in the world, selling millions of albums (a figure not lost on the star) and being a regular tabloid interest.

What’s interesting to learn in our brief conversation (audio is available via RTL Play, though the quality is not great), is just how nice, humble and genuine Mick Hucknall is and the Simply Red frontman reveals how he remains determinedly dedicated to his craft.

Holed up in the UK and preparing for a show in Paris this coming weekend, Mick Hucknall talks us through the preparations for the upcoming tour, how he navigates boredom and the chances of a Manchester United revival this season. RTL Today Radio's The Lunchbox host Stephen Steps Lowe overcame a few prematch nerves and fears we would be stood up again (third time's the charm) in this candid chat.

Steps (S): Are you gearing up for the tour, in the middle of the tour, or are you preparing for everything else that gets involved with music promotion these days? Because it's a very different industry now, isn't it?

Mick Hucknall (MH): Well, I have a show in Paris on Sunday, and the reason I'm here, is… well to be talking to you about the upcoming show in Luxembourg.

(S): You have a great following here in the Grand Duchy, and I guess that's one of the reasons why you come back so often. Do you find that there are specific places in the world where there is more of a following - that’s a stupid question. I’ll rephrase that. What I'm trying to say is, are you surprised that you have such a big following in Luxembourg and are there other areas in the world where you are surprised by such a large fanbase?

(MH): Well, I really only go where I feel like going, to be honest, and I've very much enjoyed seeing different places over the years. Traveling around Europe is something I've always done. Since 1985, I was very comfortable in Europe, and these days I don't really like traveling too far too often. The UK and Europe always seems the easy option for me.

I'll be really honest, I have absolutely no interest whatsoever in the contemporary music scene in Britain. It doesn't interest me at all

(S): With 40 years and more than 50 million records under your belt, how do you stave off like lethargy and boredom for yourself and as much for your fans?

(MH): Haha, yes, most probably. What was the question again?

(S): How do you save off lethargy and boredom for yourself and for the fans?

(MH): Well, the atmosphere among the fans is what remains the most vital aspect. One of the great things about this band, that I am playing with now, is they're all very good musicians and they're always checking each other, so they look to their right and go, ‘this guy is just as good as I am’, so I've got to keep my standards up too. What I try to do when I perform live is to stay faithful to the song. So, it's a little bit like classical music in the sense that I hit the notes, but I suppose you could argue that the notes are written on the sheet music. I want to give the audience as faithful a performance as I can. 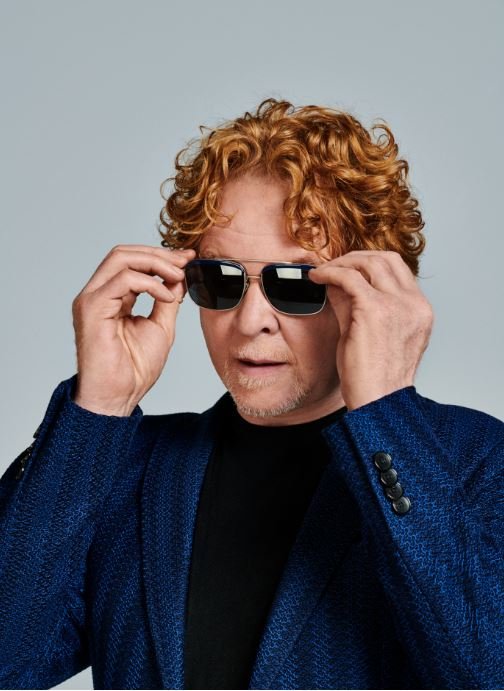 (S): Given that your success right from the beginning was relatively swift, how do you think today's upcoming pop stars would cope back in that time? And how would you cope now in the new modern era of music management?

(MH): It's a good question, but it's a very difficult question to answer, because I'm not involved in modern music or anything in that regard. So I can't really answer the question for what people starting out are doing now. I know that it's changed and that it seems to be the most open way of accessibility to music lovers throughout the world. The one joy is that there are more music lovers now than ever, and that’s a good platform for those starting out.

I saw it so often, people in tears, and you're thinking, ‘oh my god, they lost somebody’. And it's my job to try and offer some solace and some comfort

(S): This is not a personal question necessarily, but given the number of headlines that have been written about you over the years and don't worry, I'm not fishing for anything, I'm just wondering what would you say is the most common misconception that is out there about you?

(MH): Well, never let the truth get in the way of a good story. Look, I get it, I understand why there is a need for it, they're in the business of selling papers, so they want a story that will attract people to their papers. Now, that story doesn't necessarily have to have merit or truth, but it needs to draw people in. It needs to sell papers. It’s not unlike an artist’s need to sell records, but, well…

(S): That follows on because I've seen a lot of interviews you've carried out more recently with smaller media. Is that a conscious thing you have decided to do, to help the smaller media get by, to lend your name to that? Or was it because you wanted to get away from the tabloids?

(MH): To tell you the truth, I have nothing to do with that, my manager is the one to decide who I speak to and what we do.

(S): May I ask you a broader question, then?

(S): What is your view on the current state of music in the UK? Because it's going through some real difficult times at the moment…

(MH): Again, I'm sorry, but I just don't know. There's no point in answering a question that I don't know about. And I'll be really honest, I have absolutely no interest whatsoever in the contemporary music scene in Britain. It's doesn't interest me. It's…..well, I am not really listening to contemporary music, it seems to be about the money above all else and the need to team up with other acts simply to raise a profile. You know, one of the things that I think a lot of these artists do these days is that they do collaborations where they calculate their handouts, so they work with another big band in the hope that it makes them twice as big. And it's mostly about money. It sounds like it's going the same way as football. It's not music first now, it's just money and getting more sponsors, that kind of thing. Celebrity doesn't interest me, in the least. I'm more interested in melody and well sung quality, greatness of performance. Those are the things that drive me the rest, I'm not interested in it.

(S): I understand. That wasn't really the angle my question was going for. My angle was more to do with the live music scene and the support that the government offers for musicians currently in the UK. That's what I was referring to, as opposed to, emerging artists…

(MH): I don’t know enough on that to offer an opinion, and am not comfortable speaking on that from my perspective…

(S): No problem, we'll move on. You had said in previous press releases, that on Blue Eyed Soul, you had wanted to push your voice a little bit more. Why was that?

(MH): African American culture is one of the unspoken heroes of the 20th century. African American culture has done so much for the world.  The way we speak, the way we dress, and this is, in my own way, a tribute to African American culture. And when we finished the record we thought ‘this sounds great’, but then when COVID hit we were kind of down for two years, not working. By the time we come out of COVID, though we are still sort of in it, the album didn't carry the same kind of resonance and relevance. And that was a shame as effectively we couldn't promote it. And on a personal level because of the simple fact that we've been away for two years, I think many people in the audience could well have lost family members and loved ones. At the beginning of this year, it was pretty heart-breaking when I would look out in the audience and there'd be an empty seat next to a lady or a gentleman, and they were crying. I saw it so often, people in tears, and you're thinking, ‘oh my god, they lost somebody’. And it's my job to try and offer some solace and some comfort. And one of the biggest joys of my profession is that at the end of the show, that person who was crying, would then be standing and clapping their hands and dancing and that gives artists incredible, yes, responsibility, for the very real kind of joy. So this is a roundabout way of telling you that this show we're doing in Luxembourg will be very much focused on the fans' favorite songs. It's more of a Best Of show rather than simply promoting Blue Eyed Soul.

(MH): It's almost a mission. It’s an absolute joy to help people through something or to make them feel happy and of communicating an emotion that the audience can relate to and can appreciate that it ‘could be about me.’ It makes my life and career….it’s validated.

(S): How have you changed as a performer, are there major differences in the way that you approach a show?

(MH): Another good question. Not really, my main aim is to represent the songs the best I can, and you can see it on YouTube comments ‘Can he still hit the notes?’ and you want to give people an honest performance. Something that is a good rendition of their favourite song. I never forget the one simple fact that people have spent money on getting a ticket and I will respect that.

(S): Thank you. I want to ask you a cheeky question how do you think Manchester United's chances are this year?

(MH): Well, I started supporting Manchester United passionately when they were relegated to Division 2. So, I know what it's like to be a loser …in regards to football. I remember it was the 72/72 or 74/75 season, I think, and we’d have 60,000 people at Old Trafford every weekend, so you have got to support your team in the down periods as well. when they're struggling as well. I'm just hoping now that we have a stability where we can slowly start to work our way back into the top echelons. Into the Top Three. We’ll see how it goes.

TO WIN TICKETS for the show at Rockhal (den Atelier) simply send the RTL Today Radio Crew an SMS/WhatsApp: +352 621 52 5000 and tell them your absolute favourite Simply Red Song (don't forget to add your name) and you could be in with a shot of seeing the show on Tuesday 8 November - support comes from Mica Paris, ticket information available here. 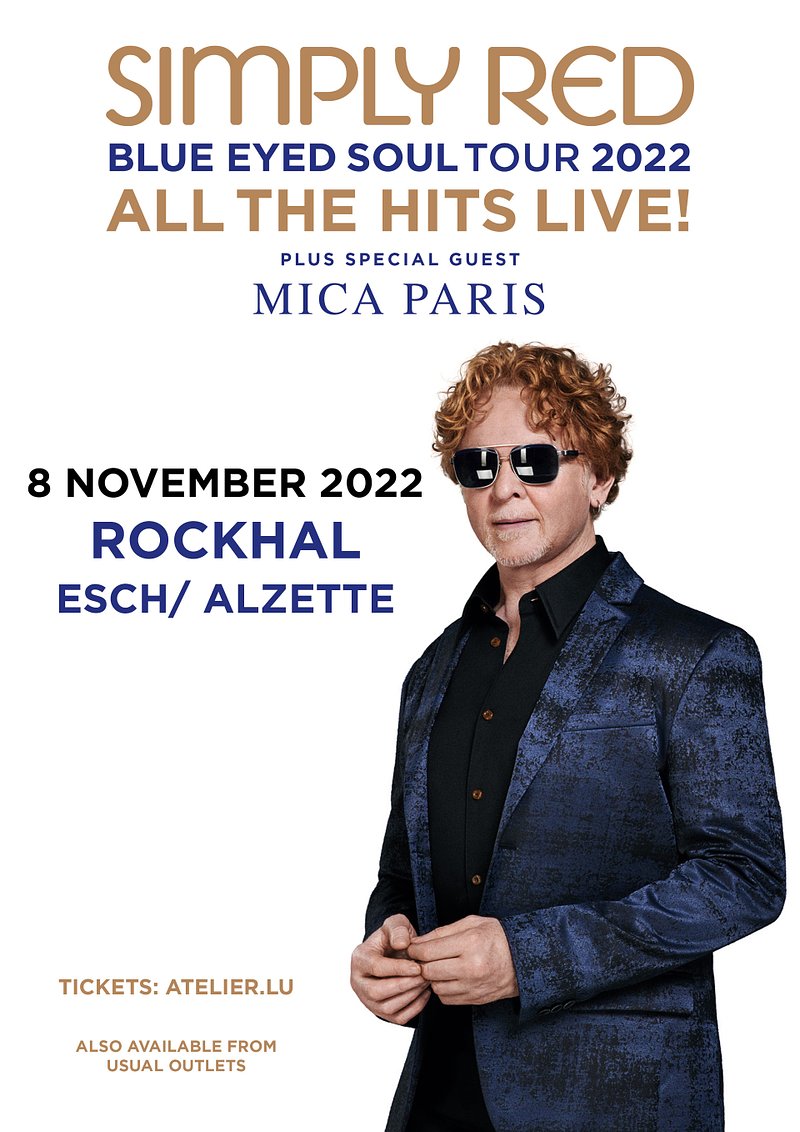