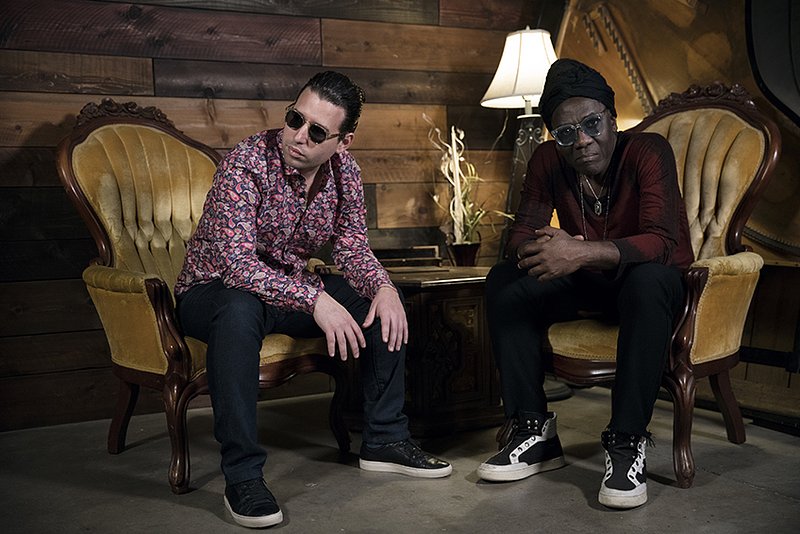 The Cameroon-born, multi-instrumentalist musician Richard Bona spoke to Josh Oudendijk about figuring out his passion for music growing up in a tiny village, being an independent artist in the music industry, and why living in New York hotels makes more sense than owning apartments.

Richard Bona, aka The Ninja, how are you? Are you calling from Miami?

Hello! I am in my studio in Miami. I've been working all night. I always work at night because I'm more productive and I don't have people calling me, you know?

Well you have a journalist calling you at night now...I saw you were practicing some ninja tricks on your Instagram page, is there a certain martial arts form you practice?

I just practice with sticks, instead of training with a sword. It's more safe. But I do it for fun, nothing serious.

You were actually my last concert before Covid started, in Maastricht in early 2020. You announced after the gig that you weren't coming to the merch stand because there was this virus spreading. And a couple of days later you were on a plane to the US because they locked down.

Oh wow, yes I remember. After Maastricht we went to Turkey and the manager called us and said we had to get back home.

How have the last two years been for you? You've been producing and writing a lot?

I've been writing a lot. Not only for myself, also other groups and artists. What I was doing during Covid was writing for other people, both songwriting and production. I started a new business in Covid: selling songs to people! You order your song, you want reggae, salsa or something more reggaetón, that's what I've been doing these past days. All you need to do is add your voice, send the money and we roll. Haha!

A lot of session musicians were recording from home, built their own home studio, started doing sessions virtually.

Yeah you have to. We're starting to open again, but this was violent, it came out of nowhere. You had to stay home. What do you mean I had to stay home? In the beginning we thought it would just be one month, but then one month passed by, so did two, three, four. I didn't wait. I thought: Maybe this is a new beginning?

I have a room here where I set up my SSL mixing board, my speakers, and I work all from home.

You are often on the road, how does it feel to be stuck at home? Did you have a nice moment of reflection?

Yeah, also considering Florida where I live. I used to live in New York when Covid started, there it was really bad. I thought if this was going to go on for that long, I need to find a place where regulations are not so tough and strict. Very strict in New York. We've never been in lockdown in Florida. So I came here, bought a house here and I live by the sea.

The weather is nice, it's a good move. But now I don't even think I'm going to move back over there, because I got used to this... going back to snow, I don't think so.

Sometimes I watch your Facebook Live 'rants' and you had a few about crazy housing prices in New York. Staying at a hotel for a month is cheaper than owning an apartment?

I have a friend, a trumpet player, and he broke down the calculations for New York. I own six apartments in New York City, but I have to pay a huge maintenance fee for those apartments, you see what I mean? Always fixing things. So if you look at the numbers after a while, it's better to be a traveller and stay at hotels - and he could write off his expenses! And his room is always clean.

You came to New York as a young adult. It must have been tough back then already. Would you do it again today?

Africa unfortunately wasn't a place for me, where you could grow. I think people still lack a lot of knowledge, understanding and tolerance, so it will take time. Many of these countries just got their independence in the 1960s, so they are still battling other things. For me it wasn't the proper environment to stay in, I'm always trying to embrace new environments. I already knew as a kid that I couldn't stay in Cameroon. I need to find a place that is evolving.

I was born to run. I wasn't born to sit and wait. That's what I've been doing.

And your family saw you were running. Did they let you go, or keep you back?

They understood, they never kept me back. They knew I was different. I wasn't playing with other kids. The moment I discovered music - not discovered because it's always been a part of me - but when I first connected I was three, when my grandfather built me a balafon (bit like a xylophone, eds. note), my brain just started to open and open.

You can't explain it. Music has that capacity of you making sense with nature, with people. Makes you understand many things. People think it's only notes, but it's highly spiritual. I started to play all kinds of instruments, and all of a sudden it's feeling good.

I understood this when I was a kid. I thought man, this is the most accurate science, it makes so much sense. He built this balafon, but it was a pentatonic balafon, so I thought some notes were missing. So I built the other wooden notes in-between. I was singing the notes, and I thought, why don't I have these notes? So I started filling up by balafon and after a while I had a massive balafon with pieces of wood!

I think this is also a gift. We all come here with a gift, we are all gifted. But it's about finding your gift. I was lucky to find this gift at a young age.

It's something many people wish for, going through life hoping to find that what they are meant to do.

Yeah, and there is no book for that. You are going to feel it. You know it right away.

I'd like to ask about your songwriting. Are you writing mainly on keys, bass or guitar?

Almost everything on guitar. I want to relate to the key and melody so it's easier on the guitar.

What fascinates me is that you are able to bring an instrument like the bass, which is commonly more in the background and part of the rhythm section, into the spotlight. You're giving it its own voice. Where does that come from?

It comes from the voice, the closest thing to us. My bass playing is based on my singing. I think that's why probably you'll connect with it the most.

Live you often sing and play bass in unison.

Yes I always sing my bass lines. Like this song I'm just recording, I just sang the bass line. I want to feel it from the heart.

Do you have perfect pitch as well?

Yes, but that came after, though. I never knew what perfect pitch to start with. I grew up in a tiny village, there was no musical school. No one to tell me what a C7 chord is. My ears were my school. Trusting my ears.

I always say excellence is repetition. I trained my ears to recognise any note. I don't think it's perfect pitch, maybe relative pitch? I don't know how to call it. Also, by playing certain songs at a certain key all the time, my ears started to recognise the notes.

For many years what was bothering me, in a train station, my brain would start to analyse everything. I'm in the lobby of the hotel, I could be tired, waiting for the keys, and they are playing some cheesy hotel music at the lobby, and I hear music that I would never play, but my brain analyses it. Why are you playing that chord, it thinks.

My brain is already thinking about arrangements when I listen to songs, like wow, what a beautiful modulation or transition! I started to re-educate myself to try and ignore some things I hear.

I will walk on the street and think to myself, from where I am now to the gate over there I will need 112 steps. And trust me, I can't believe it, the distance, the tempo...and I get mad at myself if I take exactly 112 steps to get to that gate! And I also get angry if I get the calculation wrong. Crazy things going on in a musician's brain!

You are an independent artist. You're working with Quincy Jones and his management team. But how are you perceiving the world and jazz music industry at the moment?

There are a lot of musicians emerging right now that are understanding you don't necessarily need a record company anymore. 20 or 30 years ago, we couldn't even sell our own music. We needed a record company, a middleman to sell this music.

The whole industry was set up with a big disadvantage for the artists. When you look at the whole thing, there is no way out for an artist. And how it is set up now it is benefiting the artist. I can put music out now and if people like it they will buy the music from me.

But in general, a good business is from one hand to another hand. With record companies, you have to go to so many middlemen. At the record company, I pass by record to this person, who passes it to his superior. Man, by the time the return comes - IF there is a return - sure, you have visibility but visibility doesn't pay the bills.

I started thinking: I invented this music, this is my craft. Like my grandfather used to do, he was a cocoa farmer, he sold his cocoa straight away. If I want to sell this shirt to you, and you give me money, that's the best transaction business, right?

It's like you're willing to sell me this shirt, but I tell you it sucks and you need to start all over again.

Yeah, man. Or I sell you this shirt and now I owe you money! And how do I know what you are spending on promotion in Japan or whatever?

When they sign you, they give you an advance, but it's like a loan. To show you how evil the system is: when a bank gives you a loan to buy your house, once you are done paying your interest after 20 years, your house belongs to you, right? With record companies, when they give you the loan, you write an album with your music, with your blood. Even if you pay the loan 50 years later, even if you are dead, the record still belongs to the record company. Haha, I mean, what?

For example, all the records of Miles Davis still belong to them. I don't think that's right.

Now you are signed to a company led by a musical legend, Quincy Jones.

I own all my stuff. With Quincy it's simple, he's a musician. I'm really happy being an independent artist in these times, I couldn't do that 20 or 30 years ago. They can listen to it, download it. Many platforms are out there. You can communicate with your fans.