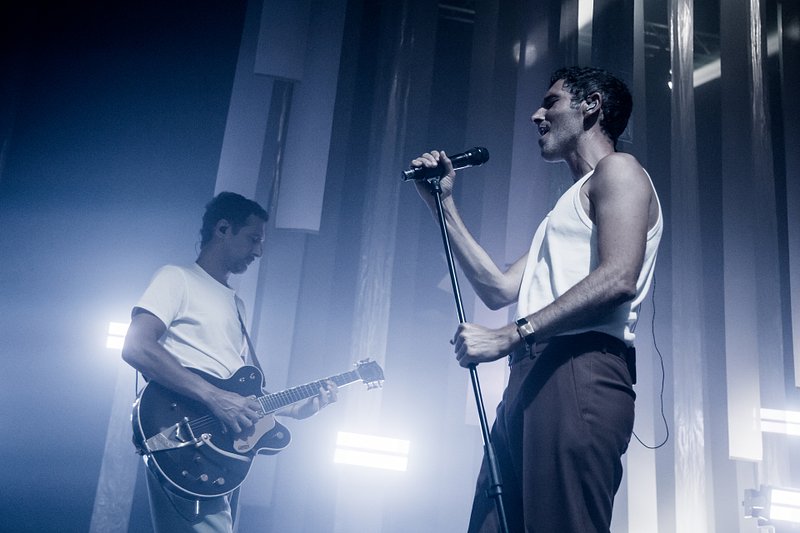 The French electronic duo AaRON is always on the hunt for new creativity and honest inspirations, to an extent that even Belgian actor Jean-Claude Van Damme reached out to them for a collaboration. Singer Simon Buret spoke to RTL Today.

We've got a pair of tickets to give away! To win tickets to the AaRON show at den Atelier on Tuesday, 26 October, comment the name of their most recent album below the article!

How are you guys?

We are excited, nervous, happy to be on tour. All those mixed feelings after a year of not touring. It feels good.

Are you having to get used to being back on stage?

We are not more nervous than usual, but more fragile, both us on stage and the audience. But fragile in a good way. We are more open to what could happen, things are less precise. Everybody saw what happened, so everyone is ready for a new experience. There is a new layer of magic now, it's more touchable. We are a band with big tours and a big audience, but then everything can stop in just a snap.

On Instagram I saw a video of you performing an acoustic song in the middle of the crowd.

Yeah that was the last song. We were going out of the stadium and we thought "ah fuck it, let's just do it in the middle." We want these accidents, happy accidents, to happen. We don't want to be this band who prepares everything, we want to allow us to feel the walls of the room we're in. It also depends on whether you're tired or excited. We feel the ambience and change things. Then it's fun, because every song is different because you sing it for different people, different audiences, different rooms, a different you.

Are you flexible on stage with your performance?

We have one setlist of course, so we can pick and choose from one gig to each other. We're not super flexible, but there's room for unprepared stuff. I felt like we had to do it, it was great.

The light technician must love it that you mix up the set list.

(laughs) But then we know him so well that he knows we can be sneaky. He's gonna be mad but we know he can handle it. We keep him awake!

So many questions are related to Covid, but your latest album was also related to it - postponed because of the pandemic. Was it ready prior to Covid, or did you go back to it and finetune songs?

The Anatomy Of Light was ready. It was supposed to be out beginning of 2020. We were ready to party and do this big tour. Then we decided to put it out there a year after, because we thought: If we don't do it now we're never gonna be able to do it.

The albums we create are a part of ourselves, it's a journal of us, it's who we are. Ee felt that it maybe wouldn't feel so true if we were to wait two, three, four years. So we put it out.

It was very weird and frustrating in a way because we see the numbers (sales, Spotify) but there's no personal contact. The only good thing was that we got our mind focused on working, we did some other stuff like video shooting. Things around the album that would not have been possible. It was just another way of staying in a creative spirit.

You say the album is a bit like your journal. If you open it now in 2021, do you reinterpret your journal in a different way? Look at songs differently?

Not really in a sense when we're talking about precise situations in my songs. But what surprised me the most is that it can trick my mind. I remember the songs I wrote years ago, when I sing them on stage I can adapt them to the person I am today. We are all ever-changing, but the lyrics are more vivid. I think it's more feelings than situations. Feelings are forever, you know, I am not forever sad when I'm singing about a sad song. It's there, it's alive.

Maybe you're right, I don't know, Covid gives it another layer. Especially when I address it to people in front of me. The fact that they sing the lyrics. There is an invisible link inbetween us.

Are you sensing a different energy from the audience?

With this kind of thing we are proving we are alive. I know the comparison can sound a bit weird, but I really experienced this. There is a whole new layer of sensation behind the music. Most people that come now are experiencing their first gig in years. So most of them cry, shout. There is a lot of communication with the audience, more than before. I mean, sure, there was a lot before as well, we give a lot but also ask a lot from our audience. It's hard to describe, but it's a burst of life. They give me a lot of energy.

Do you prefer singing in French or English?

I don't really, I just switch my mind. My brain is made in this weird way.

Sometimes in the middle of a song?

Yeah for sure. When I speak as well.

Were you raised bilingual?

Kind of, my mother would keep it up. My father doesn't speak French. People think I'm American! Now I accept this thing more, when I was younger it was harder, we're all a big mix of many things. I don't like tags anyway.

You were talking about the videos. You had some big names in your songs Ultrareve and in Blouson Noir? How did these collaborations happen?

When I use "icon" it's because there is a religious connection, a whole fanatic world around this guy. The lyrics to this song go "do not be afraid, there is no mistake." Of course there are mistakes, everyone is just a big bag of mistakes. This is what we are. These days we're leaning to perfection in so many ways. Asking for perfect skin, perfect job, perfect dog, perfect love. I think it's because we fear losing control. I think if this guy would put our words in his mouth, people would understand the message better.

I think we are our own worst judges. Everybody is looking into the mirror, everyone around me is, like, "I don't like this". I was trying to deconstruct this. So if we can get this icon as a commander, to say "hey guys, I am a big mess too" people may think everything is alright.

Is it a lack of belief, or fear of rejection?

People are hard on themselves. The world we live in is asking more and more. Perfection is a goal for so many people - from the perfect job to the perfect ass, everything should be more. It's an obsession. When you see pictures of people that are flawless, what does that mean? Asperity is the beauty of life to me.

Do you have a favourite song off the latest album?

Is there a song that you're tired of performing?

Well, I have an example. We were tired of this song called Le Tunnel d'Or, it was on the first album and we didn't want to play it anymore, we though: Ok, we've done it. There is no connection. But then as a trick once we tried something else at home. Olivier and I went to the studio and made a new stripped version, changed some vibes. And now it's our favourite!

We are allowed to do whatever we want with our songs, and sometimes you just have to go around it and rewrite it. On stage our gig is 1h30-2h long so we can choose from our bag of songs. Some are going to be in the shade again, and then in the light. There is no song that I hate or so, no. Now it's very exciting, we have this new song written 10 years ago!

Do you feel pressured from the industry to release more music?

Of course, but you don't do it. You have stay inspired and ready. We don't do so many albums. We don't do 200 songs, we take time. We only open our laptops when there is something to say, something to share. It's important, it's a vivid thing. Otherwise it becomes work. The industry is a monster that never sleeps. I am trying to stay the most free I can.