How do you improve on one THE BEST albums of all time? Well, it turns out, that you don't. You just get 53 artists to reinterpret some of the classic tracks and see what happens.

This 30th Anniversary remaster will make a good number of us feel incredibly old. The classic album has been dusted off and cleaned up to give us a version of a record that most of us already know line by line and word for word.

Accompanying the original works are 53 versions of the tracklist from a truly eclectic array of musicians and bands. Some guests fare better than others. While it is clear that there is a huge amount of love for

Weezer sleepwalk through their take of Enter Sandman and the less we say about J. Balvin's truly dreadful reggae-ton 'effort' the better.

Rina Sawayama's bonkers version of the lead track is exactly what is needed, breathing fresh life into a rock staple.

Jason Isbell and the 400 Unit put Sad But True through the rockabilly blender and offer a cut that just about works as standalone. Royal Blood's highly anticipated effort treads far too close to the original to be anything other than a faithful cover and is, due to that fact, an almighty disappointment. As good as it is, there are zero risks taken. St. Vincent changes things up hugely, though, adding a Prince-like squelch to the well worn chorus.

Biffy Clyro bring typical bombast to Holier Than Thou whereas Slipknot's Corey Taylor serves up the track as if he were joining the band on stage.

The Unforgiven gets a number of versions, indie-pups Diet Cig throw down a bit of power chord lead proto-punk and Cage The Elephant attempt to strip things back, it's left to the agitation-Hip-Hop of Flatbush Zombies to deliver a rousing and unique take, adding scratching and breakbeats, in what is an unexpected highlight at the halfway point.

While we are here, et's talk about the album listing shall we? Yep, it follows the original's route but places ALL the versions of the same track after each other. So, to kick things off you've six versions of Enter Sandman, seven of Sad But True. There are 12, TWELVE of Nothing Else Matters!!

It may have been tough to sequence, say four records proper, and then some exclusive tracks. But it would have hit a lot better. It can be a slog.

Though, listeners can put together their own definitive covers cuts into one album, if they see fit.

The Neptunes, Portugal. The Man, Volbeat, My Morning Jacket all come and go, without much fuss.

Miley Cyrus crops up with WATT, Elton John, Yo-Yo, Rob Trujilo and Chad Smith for a full of pomp (in a good way) on another Unforgiven but even then is upstaged by the much more delicate Phoebe Bridgers on the version which precedes it.

On The God That Failed, IDLES to what IDLES TM now dictates, that is to tear through things as swiftly as possible. It is as belligerent as it is brutal.

To top the album(s) off Kamasa Washington seemed to know something that no one else in the world did, that My Friend Of Misery was at its heart a future-jazz classic. It is exceptional.

Rodrigo y Gabriela wind things down with a finger picked The Struggle within and 53 tracks and some hours later the job is done.

True, only the steeliest of Metallica are going to through the tracklist more than aa couple of curious times but, you get the sense that with many contemporary artists revealing their love for the metal titan's biggest and best, there could be a brand new audience opening up.

The Metallica Blacklist is available now via Rough Trade. 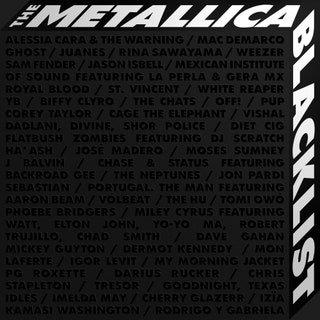