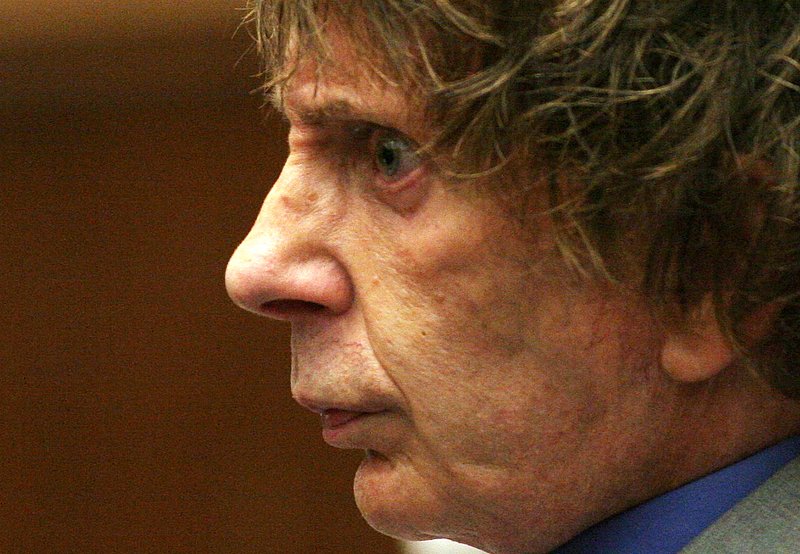 In this file photo music producer Phil Spector is seen during his murder trial at the Los Angeles Superior Court on September 20, 2007 in Los Angeles, California. / © AFP/File

Phil Spector, who revolutionized 1960s pop music with his "Wall of Sound" technique but ended up in prison for murder, has died at age 81, authorities said Sunday.

In his heyday, Spector was the undisputed king of rock 'n' roll producers, the "Tycoon of Teen" whose music helped define the soaring optimism of a generation.

But the sharp suits and dark sunglasses favoured by the diminutive genius gave way to prison clothes after he was convicted of the 2003 shooting death of actress Lana Clarkson.

Spector allegedly caught Covid-19 in prison, and died after being transferred to hospital from Covid-related complications, reports TMZ.

He was pronounced dead on Saturday and his "official cause of death will be determined by the medical examiner," according to a statement from the California Department of Corrections and Rehabilitation.

Born in New York to Russian-Jewish parents in 1939, Spector was only eight years old when his father committed suicide, a family tragedy that was to leave lasting scars on the young Spector's psyche.

In the aftermath of his father's death, Spector, his mother and his sister moved to Los Angeles for a fresh start.

It was not long before Spector's musical talents emerged, with the slight teenager showing a flair for song-writing and playing guitar.

Forming his first group, The Teddy Bears, with three high-school friends, Spector soon struck gold with the 1958 single "To Know Him Is to Love Him" -- the inscription on his father's gravestone.

The record went to number one on the Billboard Hot 100 and sold five million copies. The Teddy Bears were unable to repeat the success and they split up the following year.

The creation of his own "Philles" record label signaled the beginning of Spector's prime, when he almost single-handedly changed the recording industry with the "Wall of Sound."

Using large numbers of musicians playing individual parts layered upon each other, the technique gave Spector's productions a distinctive, orchestral quality that he famously described as "a Wagnerian approach to rock & roll: little symphonies for the kids."

"I knew Beethoven was more important than whoever was playing his music," he once said. "That's what I wanted to be."

Working with The Crystals, The Ronettes and The Righteous Brothers, Spector became a hit machine, with tracks including "Da Doo Ron Ron," "Then He Kissed Me," "Be My Baby," "You've Lost That Lovin' Feelin'" and "Unchained Melody."

The final act signed to the Philles label was Ike and Tina Turner in 1966, but Spector was dismayed when the extraordinary "River Deep -- Mountain High" reached only 88th in the US singles charts.

He returned in the early 1970s for a triumphant collaboration with The Beatles on their hit album "Let It Be," and produced solo albums for John Lennon ("Imagine") and George Harrison.

As the 1970s progressed, Spector became increasingly reclusive and rumours of his eccentric behaviour became legend.

The graphic testimony at his murder trial of repeated gun-toting rages only served to confirm what had been common knowledge within the music world for years.

Ronnie, who divorced him in 1974, chronicled years of abusive behaviour in her autobiography, which included the producer threatening to kill her and put her body on display in a golden glass-topped coffin he kept in her basement.

"I can only say that when I left in the early '70s, I knew that if I didn't leave at that time, I was going to die there," Ronnie wrote later.

Spector's threatening behaviour also extended to the artists he worked with. He was alleged to have fired a gun into a studio while working with Lennon during the recording of "Rock 'n' Roll" and once held a gun to Leonard Cohen's head during sessions for "Death of a Ladies' Man."

In another incident, he held punk band The Ramones hostage at gunpoint during recording of their album "End of the Century."

Clues to Spector's troubled state of mind were evident in a rare and wide-ranging interview he gave to British newspaper The Daily Telegraph, just weeks before Lana Clarkson was shot dead at his home in February 2003.

"I would say I'm probably relatively insane, to an extent," he said. "I'm my own worst enemy. I have devils inside that fight me.

"People idolize me, want to be like me, but I tell them, 'Trust me, you don't want my life.' Because it hasn't been a very pleasant life.