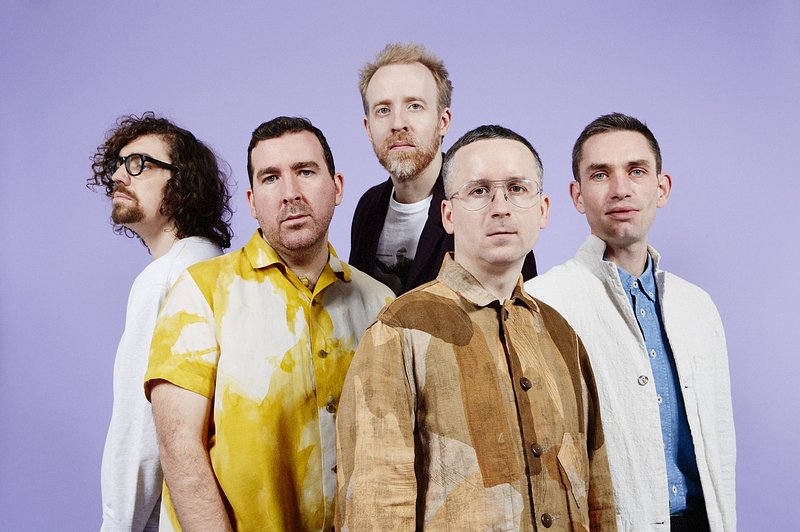 In support of their latest album release, A Bath Full of Ecstasy, Hot Chip is bringing their pounding electronic pop rhythms to Luxembourg for the first time in history. RTL Today's Josh Oudendijk spoke to Hot Chip's Owen Clarke about the record, the importance of bouncing off the occasional stupid idea, and the response from different crowds around the world.

Find out how to win tickets at the bottom of the article.

I think Luxembourg’s going to be an interesting crowd for you: Small, intimate, energetic and packed. I can imagine that’s the way you guys like it to be?

I just looked up the venue now, actually, it sounds like it’s a good size venue. We’ve done Paradiso-sized venues, and we’re really into those. Sure, we like a big show, but those sort of sized venues  have a good vibe and energy to them.

Would you say you tend to have your best shows in those smaller venues too?

It depends, really. Running up to the record we did a tour in the UK and Europe, and we did some shows in the states as well, and they were in smaller venues cause we were starting up and try things out before the record came out. Those shows were really fun, but there was seven of us on stage so it was super cramped. Bit of a challenge. But the shows were packed and had an energy from the times when we were starting out. They were really fun, but then it’s nice to get back into the venues we are “accustomed” too, if that makes sense. We’ve not gotten to the stadium or arena size. In certain cities we have the opportunity to do that, but we prefer to do three shows in a smaller place rather than one big one. Our experience of playing a bigger crowd is usually at festivals. We’ve done quite some festivals over the summer, recently a lot in the States. Now we have a little trip over to Japan and then do a whole bunch of shows in UK and Europe. In my memory, we’ve not played Luxembourg. We’re looking forward! It’s always exciting to go to places you’ve never been.

Have there been places where you haven’t performed yet but you’d really like to go?

Well Japan is one, we don’t get to go there often mainly because of geography, and it’s expensive to bring all your gear there, so they are usually the ones that are far away. It’s more interesting to go to different bits of a place that you are already familiar with. For example, today we’re in Santa Cruz, so we’ve done San Francisco and done LA’s various venues, different bits of both cities, but it refreshes your horizon when you play different areas within them. When you’re on tour you can quickly fall into similar patterns of behaviour. Anything that has new stimulus is really exciting. Luxembourg has a particular appeal to us because we have new things to explore.

You probably head out to the same bars and restaurants, too.

Yeah. Well, you do make friends. But if you arrive in a place where you haven’t been before you all go explore together.

Looking at your schedule, you’re quite literally playing around the globe. Are there differences amongst crowds in different parts of the world?

Broadly speaking, humans react the same way to music around the world. On a human level, everyone goes to shows and enjoys them, but on a cultural level they do react to music in different ways. If you’re around the UK, or for example in Glasgow, there is a really explosive atmosphere. Other cities can be a lot more of a challenge. In Japan, they appear quieter because they want to hear the music, but in between songs they are explosive. In South America they are very vocal, almost like chants, and the dancing is more unified rather than pockets of movement. The differences are something to celebrate.

Well, hard to say, really. Being tied to a record label is so much less important now. People talk about how the internet makes it easier for the bands to start up and know where their fanbase is. Suddenly you can explode on the scene, and that’s a positive thing. But I think the difference is that when we started you could make a lot of mistakes, you could come out “not fully formed”. That doesn’t mean doing things that are bad. But it didn’t have to make total sense, or even have a big hit straight away.

Is that from a commercial perspective?

Not only. You could do things in an unthinking way. Because you wouldn’t have to be worried about “oh, someone is going to filming this one”. You can’t say “this is what we’ve got, this is everything”, you have to try out things. The only other drawback is that young artists suddenly get huge exposure because of a sudden TV sync, and then you have to go on tour while you may still be that kid in the bedroom, and recording videos and then you expect to be a recording artist. I can imagine that would be wonderfully exciting, but you can’t put together the projects and responsibility just like that.

It’s wonderful that the landscape has changed and anyone can make music, anyone can begin. But there is a lot to be said about being up the armor and experience to realise who you are with a degree of privacy. Well, not privacy, but I think you know what I mean; forming a scene, seeing other bands.

What we were discussing earlier, the seven of you on a stage, it’s that nostalgia of the early days trying out new things in local clubs.

Yeah, those things still go on. The perception of you online may be different, you could be creating things just for the internet. But hopefully people still want to make music and have fun. Commercial concerns and image concerns are secondary.

You guys have been together for 20 years, do you ever feel a struggle to create original music or content, or stuck in a rut? I loved the “Hungry Child” music video, it was stunningly creative.

There is a lot of bouncing off ideas from each other, and you can talk yourself out of a dumb idea. Some of the ideas are best because they are dumb! Some stupid ideas are close to excellent. In the case of our video there were various ideas that came about, but this one, because it was quite contrary to itself in that it has lots of dialogue, we thought it might not work. But then that was our prime reason to do it. It was executed very well.

There is quite a drive to create content for every track that we create, a live session, a music video…it crowds out the things you see and drain you out creatively. The expectation to provide all this visual stimulus is challenging. And also from the receiving side, if you’re used to receiving all this material you get used to being stimulated by all this content, and perhaps you don’t enjoy them just as much. The video was a bit of disruption to that cycle.

This mindset of doing things a little bit differently, is that also how you approach your songwriting now?

Yeah, it’s always been a problem. You’re making a track and we all love different kinds of music, so we want to reference things and show love to the different things we enjoy listening to ourselves, but as soon as it becomes a pastiche, we head in a different direction. Sometimes certain songs will be a left and right during creation.

For example, the last track of the record, “No God”, used to be a super simple country and gospel song, but then it became very techno, and in the end it became a reggae song (laughs). Now it’s percussive, fizzy, and alive. That’s what we try and go for: having a feeling of many things and it’s not only one thing.

That’s the issue with genres these days, it all intermingles. Hard to separate.

Yeah, that’s good, as long as people pull from the same hat. If you hear the same mixtures again then that’s another genre.

So what’s your favourite track off the album, or was most fun to make?

Hmm, well “Spell” was kind of interesting in that it started out as a pop song after Alexis had done a song writing session with Katy Perry, so they did a couple of songs, they used a country track for her record, and this pop one went onto this record. It has quite a lot of “air” in it, and it was fun to do because all the ideas and structures were there, and then we took it into the studio and it’s one of these tracks where we all played together.

We could just play whatever we wanted, and on the album version it’s also very extended. It’s a bit of a gobbledygook, and even though we were all playing synths, it was all there in the room and fun to capture. It had experimental parts, the song-written part, a jamming part. This was one that was really fun to make but from which we also benefited making. It’s very fun to do it live as well.

I do appreciate your extended song lengths on the album. No 03:30 radio edits?

When it came to the record being released, yeah. There are radio edits but they still have slightly curious structures and don’t go straight ahead. With the record we wanted it to be more concise, even though we had written more tracks that were on the album. That’s a nice thing to be able to do these days; let the tracks be the length they really are/were, and at the end do some edits if necessary.