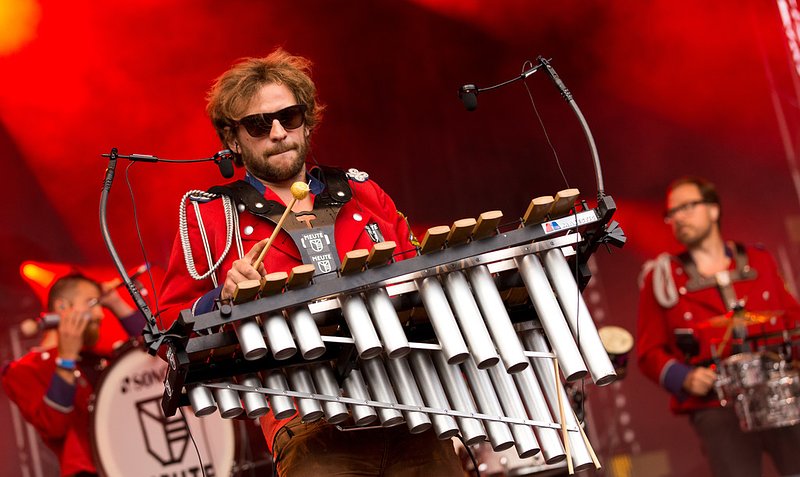 I’m not a big fan of going to the usual techno or EDM party. The music pierces your eardrums if you shake off the need to wear ear protection, and the favoured cocktail of pills and alcohol for many in the crowd is not exactly my thing. Plus, can pushing a play button really be considered a “musical performance”? MEUTE also plays techno and EDM. But they’re different, and they’re good.

Hailing from Hamburg, MEUTE is a group of 11 drummers and horn players that have reinvented the concept of EDM and Techno performed by DJs. With hypnotic rhythms, carefully crafted musical arrangements and driving, energetic beats, the group has propelled themselves to the top of Europe’s most wanted festival band. They’ve been touring the continent non-stop for several months.

They gained recognition through their spontaneous street performances, such as this one in Berlin:

It was a bitter cold that people in the queue had to fight before doors opened. Most concert goers were dressed accordingly for the occasion, with comfy jeans or wide pants; they were here to dance.

MEUTE was already in Luxembourg back in 2018, when they were only able to fill half the club. But some serious word-of-mouth and boosted popularity over the summer season last year aided in achieving a close sell-out this weekend.

The crowd was hooked right from the start. Coming out on stage dressed in their red outfits, the men played an energetic set of EDM and Techno classics, including “You & Me”, “Hey Hey”, “Gula” and “Rej”. Their music flowed between highs and lows, replicating the energy to a DJ set in a club. But it was better than a DJ set, with the group moving freely on stage, encouraging the audience to dance and shout with them. The crowd, a good mix of teenagers and adults, went crazy, especially for Luxembourgish standards.

The sound of their instruments was thick and punchy, especially knowing that there were no electronic effects involved. The tuba replicated a fat bass, the drums a machine-like, driving beat. The combo of saxophones, trumpets and trombones filled the high range. The technical ability of these performers was on the highest level, with the set lasting over 90-minutes.

For their encore, the lights dimmed down as MEUTE made their way through the crowd to the centre, creating a small space that all musicians squeezed themselves into. Audience members intermingled with the group, almost wrapping their arms around them, while trumpets where blaring straight into your face.

To prepare for the drop, the whole club (close to 1000 people) got down together with the musicians. Starting out softly, the beat picked up, the pitch increased until an explosive confetti blast got everyone jumping up and down in a wild frenzy. People loved it.

The only slight issue I had with this concert is that I’ll never walk into a regular EDM or Techno party again, because all I ever want to see again in that genre is the exceptional MEUTE.