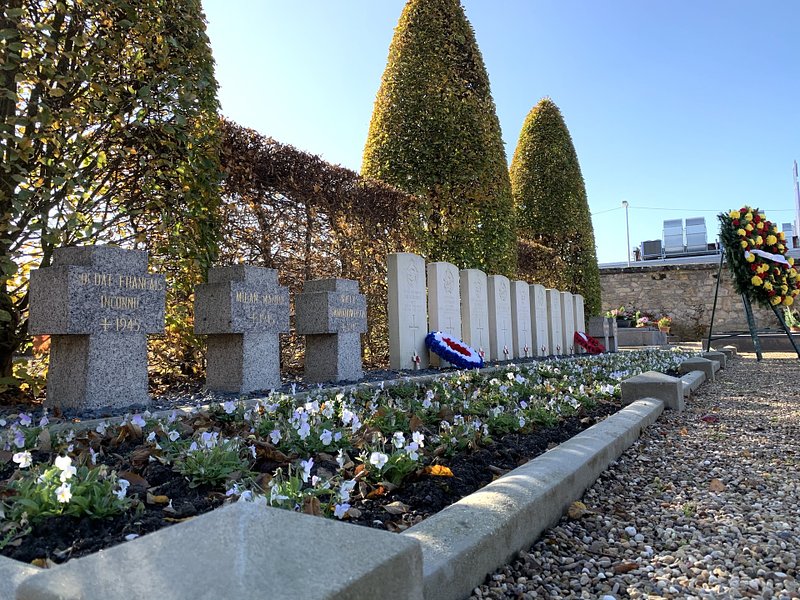 Today, members of the Commonwealth honour the memory of all lives lost in armed conflict since World War I.

The United Kingdom marks Remembrance Day this Sunday 8 November, a commemorative tradition which is also celebrated in the Grand Duchy. Due to the ongoing Covid-19 pandemic, the service was held on a smaller scale this year. Representatives of the British, Canadian, and Irish Embassy thus gathered at the Hollerich Cemetery, which is the final resting place of nine airmen who fought in World War II.

Commemorative service at the Hollerich Communal Cemetery
This year's service was conducted by Reverend Evelyn Sweerts and Ambassador John Marshall.

The current spike in Covid-19 cases in Luxembourg and the government’s health restrictions do not allow for traditional commemorative services on this special Sunday. However, Ambassador John Marshall encourages people to mark the day in private by visiting one of the eight Commonwealth War Graves across Luxembourg, all while respecting official health guidelines.

Reverend Evelyn Sweerts and Ambassador John Marshall
Memorial sites across the Grand Duchy, which can be visited on Remembrance Day.

Official statement by the British Embassy

The traditional Remembrance Sunday service on 8th November will not take place in the Konvikt Chapel due to rising Covid-19 infections. HE John Marshall and Rev. Geoff Read will lead a small party of representatives to lay wreaths and join in an Act of Remembrance at Hollerich cemetery earlier in the week. The Sunday Service will take place on Zoom starting at 10:50. You can take part via the Anglican Church’s Facebook page:

We're grateful to the British Embassy Luxembourg for helping to make this important service possible even in these challenging times. The service will livestream to our Facebook page: all welcome.

Posted by Anglican Church of Luxembourg on Sunday, 1 November 2020

You may want to consider planning your own Act of Remembrance by visiting one of the cemeteries in Luxembourg with Commonwealth War Graves. In addition to Hollerich cemetery in the City of Luxembourg there are Commonwealth War Graves in the cemeteries of Lamadeleine (Pétange), Rambrouch, Mertert, Diekirch, Hupperdange (Clervaux) and Basbellain (Troisvierges).  Three RAF aircrew are also buried alongside three Belgian soldiers near the wreckage of their aircraft in a forest near Boxhorn (Wincrange).

There are nine Commonwealth War Graves at Hollerich cemetery. Two of those buried there are pilots who died on 10 May 1940, the day the Germany army invaded Luxembourg. On that day 32 Royal Air Force Fairey Battle aircraft took off from airfields in France to seek to slow the advance of the German troops, including by bombing bridges along the border with Germany. Eleven Fairey Battles were shot down over Luxembourg on 10 May including those of Flight Lieutenants Parker and Kerridge that crashed in Merl and Weimerskirch respectively. The Fairey Battle had a three-man crew – the other two crew on each aircraft survived and became Prisoners of War. The other seven graves at Hollerich cemetery belong to the crew of a Stirling bomber of No. 7 Squadron which crashed neared Koerich on 11 April 1943. A memorial marks the spot in a forest near Koerich where the plane came down. The seven-man crew buried at Hollerich comprised four British and three Canadian airmen.