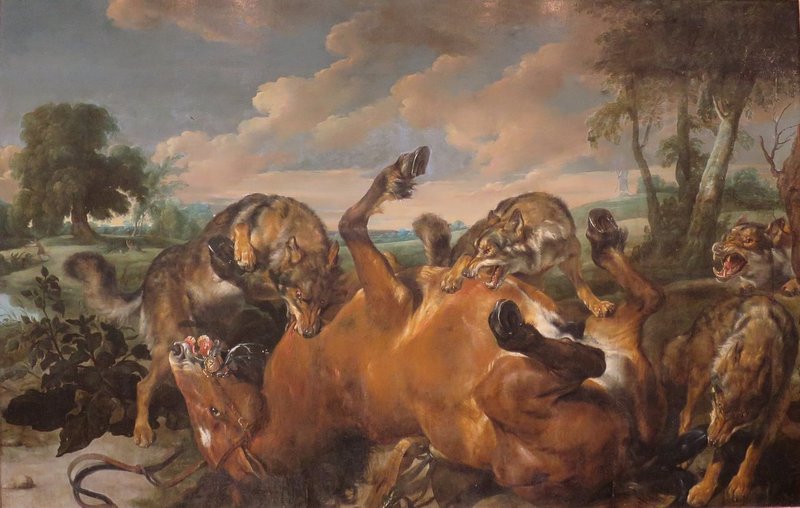 In this series, we explore some of the darker and sometimes forgotten aspects of Luxembourg. Think sinister chapters of history, eerie folk tales, conspiracy theories, infamous criminals and contemporary issues. This week we go back in time and have a closer look at wolf attacks in the Grand Duchy.

Luxembourg's last wolf was officially killed by the examining magistrate Edouard Wolff (oh the irony) near Olingen on 24 April 1893. After the recent wolf sightings on Belgium not far from the Luxembourg border, most residents were happy to hear that wolves might return to roam the Grand Duchy's forests once more. Fair to say this would not have been the case a couple of centuries ago...

When wolves acquired "a taste of human flesh"

In an early book on Luxembourg's religious history, Jesuit Jean Bertholet (1688-1755) offers a rather colourful account of a wolf plague that allegedly took place in the Grand Duchy in 1045: "The men who died in the countryside and remained without burial, were eaten by wolves; these carnivorous beasts acquiring a taste for human flesh. [The wolves] later also threw themselves upon the living, and killed a great number of them." Bertholet also came up with an explanation for the attacks: in his view, they represented "Heaven's anger."

While it's somewhat difficult to prove or disprove Bertholet's account of this early wolf plague, there were countless other reports of wolf attacks in Luxembourg. Towards the end of the 18th century, France for example officially called Luxembourg the "Département des loups“ because of the high number of wolves roaming the country. In 1801, a forester called Romainville alerted the mayor of Luxembourg City to a ravenous pack of wolves in Bambesch forest. The wolves, he anxiously reported, had already devoured pigs owned by the municipality of Strassen. Other foresters were instructed to hunt down the wolves - unfortunately there are no historical sources detailing the outcome of the hunt.

A battle between wolves and farmers in Dudelange

Another quite spectacular confrontation between humans and wolves took place in 1709, which was the year that brought  the Great Frost to Europe. Temperatures reportedly dropped to under -30 °C, plunging the Grand Duchy and its neighbouring countries into famine and misery.

To make matters worse, the extreme cold and lack of food also played a key role in triggering a veritable wolf plague in Dudelange. A pack of 30 wolves came into the village from Rotenberg a day after they had already torn an 8-year-old boy to pieces. According to various sources, the farmers took up axes, pitchforks and other makeshift weapons and had a gory battle with the voracious animals. 22 wolves were killed and some farmers badly injured.

Deadly wolf attacks on humans are relatively rare and the majority of them have involved rabies, which was first recorded in wolves in the 13th century. On 8 October 1872, two men from Strassen fell prey to a rabid wolf. The two men were on their way to Mondercange when a wolf appeared out of nowhere and slowly trotted towards them. They were not worried first because they mistook the wild animal for a mere dog.

Things took a dramatic turn from there: the wolf attacked one of the two men and jumped against his chest. Thunderstruck, the victim tried his best to keep the enraged animal from biting his neck but was badly scratched. His companion, the 40-year old J.B. Majerus, lashed the wolf in a desperate attempt to scare it away. The wolf then took on Majerus and bit him in the face before finally taking off.

The two men received medical treatment after the incident. Majerus, however, started to display first symptoms of rabies on 27 October and passed away on 3 November in Ettelbruck. There were several other recorded attacks by rabid wolves on humans in the following decades.

The most famous series of wolf attacks in Luxembourg took place in Doncols in 1847. Around 100 wolves reportedly struck terror into the hearts of northern Luxembourgers. 58 wolves were killed - which was quite a lucrative enterprise for hunters. Already in 1795, officials passed a decree that would pay a substantial sum to anyone who could prove that they had killed a wolf (usually by presenting the wolf's head). 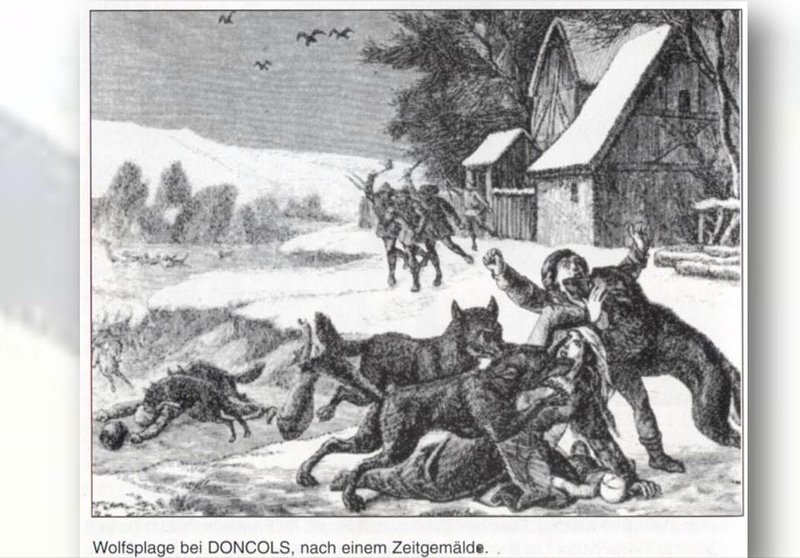