In a new series, RTL Today contributor Thomas Tutton explores the history of Luxembourg’s participation at the Olympic Games from 1900 to the modern day.

As a result of the coronavirus pandemic, the Tokyo 2020 Olympic Games have been postponed to 2021, the first such interruption since the Second World War.

For those who’ve missed their fix of Olympic action, therefore, we are going to delve into the archives of Luxembourgers at the Games.

Today, we’re starting with the rather incredible story of Michel Théato’s victory in the marathon at the Paris 1900 Olympics.

The 1900 Olympic Games, held in Paris, were only the second edition of the modern Olympics, after the Ancient Greek tradition was resurrected in Athens in 1896.

They formed a part of the wider Paris Exposition, a cultural event organise to celebrate the new century.

A total of 95 events in 19 sports featured 997 athletes from 28 nations. Many of the mainstays of the current Olympic calendar were present, alongside some rather less conventional sports: among them, croquet, cricket, an underwater obstacle course (?) and a shooting competition featuring live pigeons.

The highest drama, however, would be reserved for the Marathon, with a Luxembourger at centre stage. 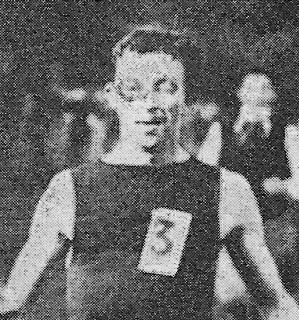 Michel Théato remains a largely unknown figure in the Grand Duchy, and for good reason. Very little was known about him even at the time, apart from the fact that he was living in Paris at the time and was a member of the local Racing Club; he thus competed for France in the race.

Later research, however, discovered that Théato was in fact born in Luxembourg in 1878, moving to Paris via Belgium in his youth.

Théato passed away in 1919 at the age of just 41 (other sources have reported his death in 1923.) He would die, however, an Olympic champion.

A photograph from the 1900 Marathon. / © Public domain

On Thursday 19 July 1900, 14 rivals set off from the Olympic stadium into the streets of Paris to compete for gold in the 42 kilometre race.

Conditions were not exactly ideal: it was 2.30pm, and at around 39°C, it remains to this day the hottest marathon in Olympic history. The field included three Britons, five French, two Swedes, an American and two Canadians (one of whom was called – no joke – Ronald McDonald!)

As they emerged from the stadium into the blistering temperatures, it became immediately clear that this would be a battle, as the streets of Paris had not been cordoned off for the event in the modern way, and the competitors were thus jostling for position among a crowd of cyclists, trams and animals and hostile spectators. The three Britons responded by quickly pulling out of the race.

Leading the event were home favourite George Touquet-Daunis and Sweden’s Emst Fast, but things were soon to go wrong for the frontrunners. Around 12 miles in, however, Touquet-Daunis apparently decided that the heat was too much, and according to legend, stopped for a few beers in a local bar.

Meanwhile, Fast was pulling ahead until he went the wrong way. It has been alleged that a French policeman had accidentally pointed Fast in the wrong direction – and even that, realising his error, the officer committed suicide after learning that he had cost the Swede his gold medal.

The race was now wide open, and Michel Théato, who had been on the verge of quitting at one point, emerged as the new leader, finally crossing the line in a time of 2:59:45.

Yet more drama was to come.

One of the remaining Canadians, Richard Grant, protested that he been hit by a bike during the race.

Even worse, Arthur Newton, the American contestant, alleged that Théato had cheated during the race by taking back alleys and shortcuts which he knew from his time as a baker’s delivery boy.

This would only be fully disproved much later - Théato was in fact a cabinetmaker – but with the cloud hanging over the event he would not actually receive his gold medal until 1912.

His victory led him to become a professional runner, but he would never repeat his early success, setting a personal best of 2:42 in 1901.

Théato’s name understandably sank into obscurity, until historian Alain Bouillé discovered that he was in fact Luxembourgish by origin.

Aiming to recognise his efforts, the Grand Duchy launched an official appeal for the International Olympic Committee to acknowledge Théato’s roots, but it was rejected in 2004.

Thus, as we’ll be learning about next week, Luxembourg’s only official Olympic gold medal remains that of a certain Josy Barthel.