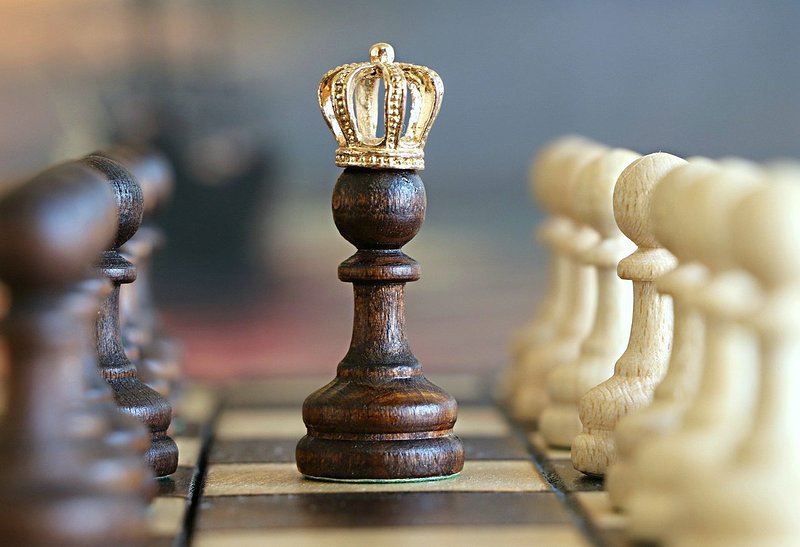 RTL Today contributor Thomas Tutton explores the history of the Dukes and Duchesses of Luxembourg, starting with the crisis of the 14th and 15th centuries.

The House of Luxembourg, as we have previously seen, became a big player in European politics in the 14th century.

This was great for the family, but it wasn’t too good for Luxembourg itself, which suffered from a century of turmoil from 1383 to 1482, as it gradually became a pawn of the great dynasties of Europe.

The old County of Luxembourg was elevated to a Duchy by Charles IV, and given to his brother Wenceslaus I in 1354.

After Wenceslaus I died in 1383, the Duchy passed to his nephew Wenceslaus II, the King of Bohemia.

Wenceslaus II was extremely busy trying to get himself elected Holy Roman Emperor, so in 1388 he decided to pawn Luxembourg – that is, to temporarily sell it to raise funds until he could buy it back - to his cousin Jobst of Moravia.

Jobst never set foot in the Duchy, and Luxembourg returned to Wenceslaus II at his death in 1411. 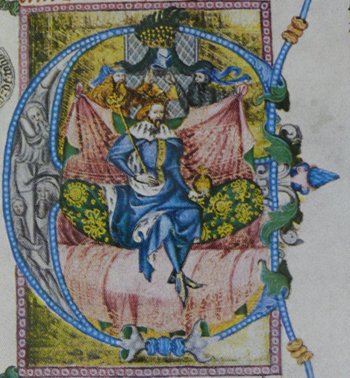 Still totally uninterested in Luxembourg due to his position as King of Bohemia, Wenceslaus II once again pawned the Duchy over to his niece Elisabeth of Gorlitz and her husband Anthony of Brabant and Bourgogne, for 120,000 florins.

When Wenceslaus died in 1419, the Duchy nominally passed over to his brother Sigismund, the Holy Roman Emperor, but he did not have the funds to buy it back from his niece Elisabeth.

Elisabeth of Gorlitz was not a popular ruler in Luxembourg. She was the granddaughter of Charles IV, but she had been born in Czech lands and was a stranger in the Duchy.

Her first husband Anthony of Brabant had to help her put down three rebellions by local noblemen, but then he went and got killed by the British at the Battle of Agincourt in 1415. 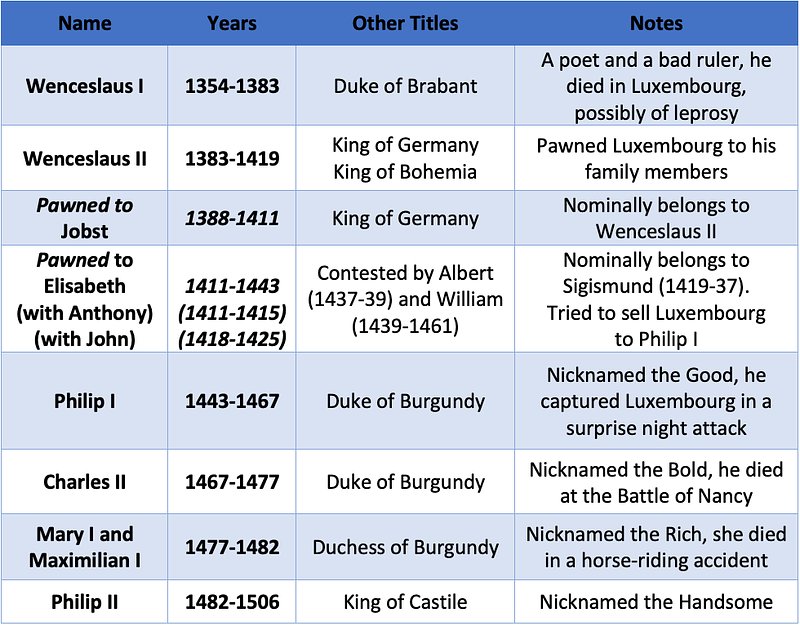 She then married John III of Bavaria, known as the Pitiless, but he also went and died by 1425.

She managed to hang on to the Grand Duchy throughout the nominal reigns of Wenceslaus and Sigismund, but by the late 1430s, she faced opposition from Sigismund’s descendants, who had a legal claim to the territory. 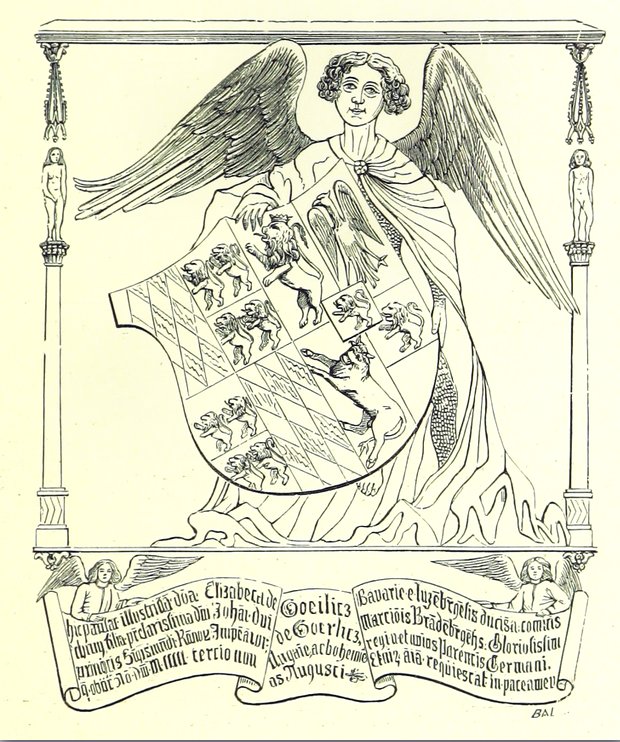 Elisabeth of Gorlitz was an unhappy Duchess of Luxembourg from 1411 to 1443. / © Public domain

Sigismund had been too busy fighting everyone in Europe to have too many children, but he did manage to father a daughter, who he unhelpfully also called Elisabeth of Luxembourg.

This Elisabeth married the Habsburg Albert of Austria, and when Sigismund finally died at the age of 69 in 1437, Albert fought to succeed him as King of Germany, Bohemia and Hungary.

Albert and Elisabeth were the legal owners of the Duchy of Luxembourg and wanted to challenge Elisabeth of Gorlitz, who only held the territory in pawn, but Albert died in 1439.

The next claimant was William of Saxony, who was betrothed to Albert and Elisabeth’s 7-year old daughter Anne of Luxembourg in 1439.

Meanwhile, back in Luxembourg itself, Elisabeth of Gorlitz was still in power, but facing opposition from every side and heavily in debt, she tried to sell the Duchy to Philip the Good, Duke of Burgundy.

This provoked another rebellion in Luxembourg against her, and she was forced to flee in 1441.

At this point, Luxembourg was occupied by the claimant William, aged 16, and his 9-year-old fiancé Anne of Luxembourg.

But not for long, because the Burgundians were after it.

The Burgundians in Luxembourg

The Duchy of Burgundy was a large and influential territory in the Middle Ages which often rivalled the Kingdom of France.

By the 15th century, the Burgundians had acquired most of the provinces of the Low Countries through purchase, war or marriage, effectively creating the Netherlands.

They wanted to take control of Luxembourg as a step towards the territorial unification of their realm. 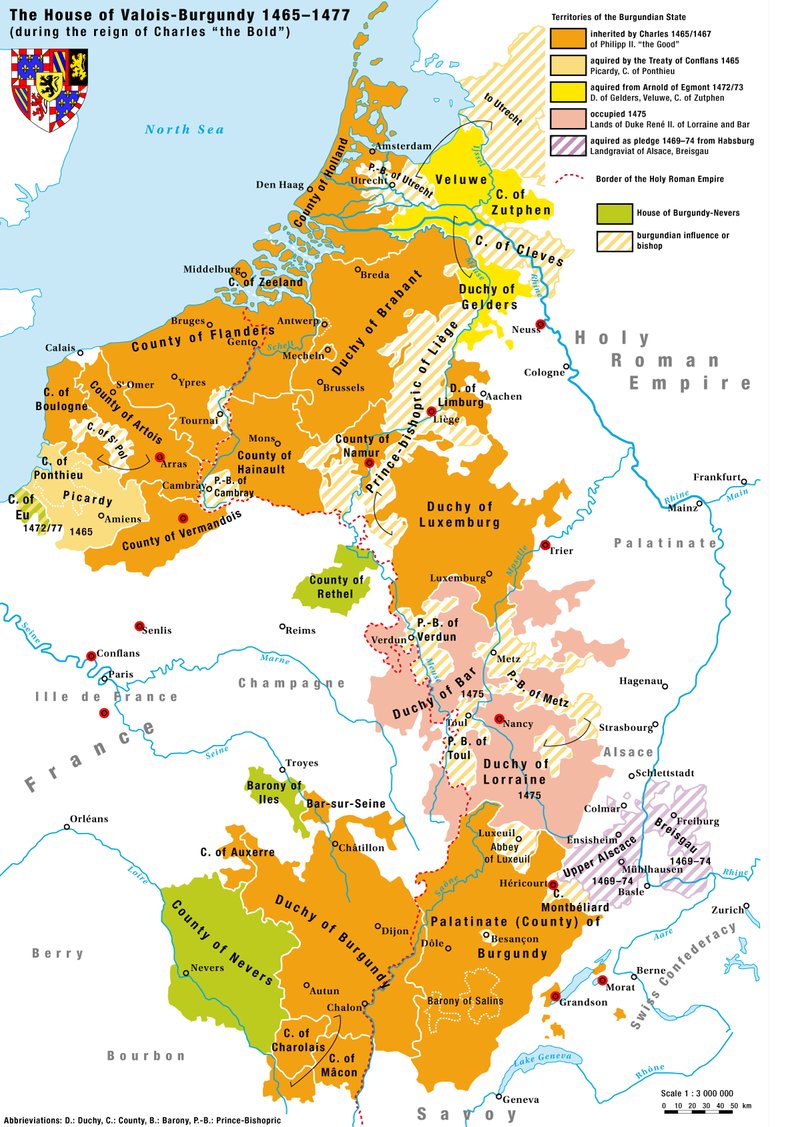 The Burgundian lands, including Luxembourg, during the reign of Charles the Bold. / © Wikipedia, Marco Zanoli. https://en.wikipedia.org/wiki/Charles_the_Bold#/media/File:Karte_Haus_Burgund_4_EN.png

Philip the Good was thus furious when Luxembourg was occupied by William of Saxony, undoing his good work in persuading Elisabeth of Gorlitz to sell him the Duchy.

So he set about attacking the fortress of Luxembourg, which was seen as an impossible task.

But in 1443, in a surprise night attack, the Burgundian troops scaled the walls of the fortress and took the city.

For the next 40 years, Luxembourg would be in Burgundian hands, but this was not a peaceful time in the region.

Philip faced rebellions in the neighbouring Prince-Bishopric of Liège, which were put down with extreme cruelty.

Then his son Charles the Bold fought a series of conflicts known as the Burgundian Wars, until he was killed by Swiss mercenaries at the Battle of Nancy in 1477. 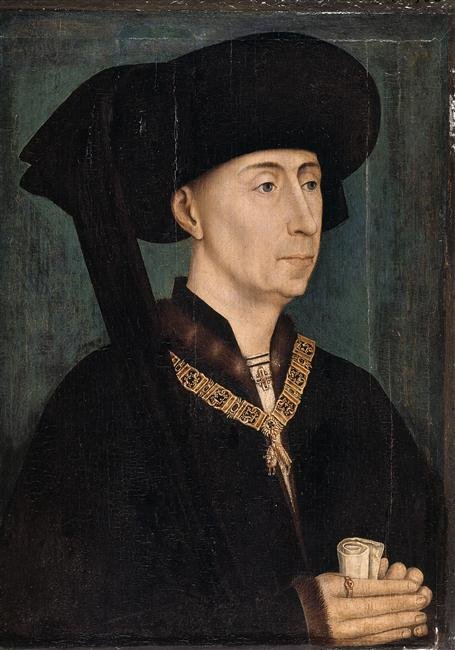 His death extinguished the male Burgundian line, and his daughter Mary I, known as the Rich due to her extensive lands, was married to the Habsburg Maximilian I.

After Mary’s death from a horse-riding accident in 1482, her territories passed to her four-year-old son Philip, who later married the heiress to the Kingdom of Castile.

Luxembourg had thus passed to the Spanish Habsburgs – but that is the story for another day.