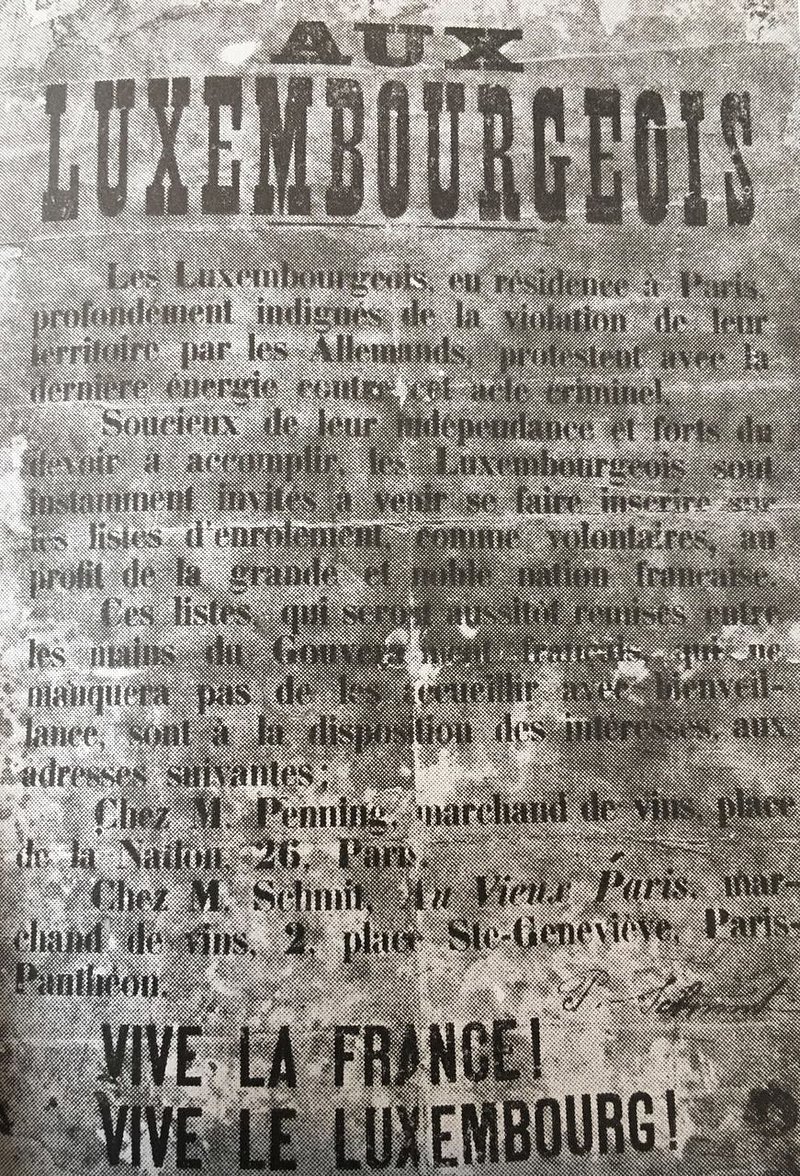 RTL Today contributor Thomas Tutton takes a look at the Luxembourgers who joined up with Allied forces to fight against Germany during the First World War.

As we learned last week, after some initial stumbles, the German Empire launched its occupation of Luxembourg on August 2nd, 1914.

There was no question of formal resistance, as Luxembourg’s 400-man army was ordered to stand down by Grand Duchess Marie Adelaide.

For the duration of the war, it was extremely difficult for Luxembourgers behind German lines to join up with Allied forces, although some were able to escape the Grand Duchy through Switzerland.

Those already living abroad, however, had no such issues, and thousands of young men of Luxembourgish origin would end up fighting in Allied armies in the years 1914-18.

Probably the largest group of Luxembourgish volunteers served with the French Foreign Legion.

On August 5th, 1914, as Paris learnt of the occupation of the Grand Duchy, an appeal to arms was launched by François Schwiesthal, a Luxembourgish resident of the French capital.

The appeal was soon published in the form of posters across the various Parisian quartiers where thousands of Luxembourgers lived. (picture)

Eyewitness accounts reveal that on the day of registration, August 21st, a crowd of up to 3,000 Luxembourgers amassed at Les Invalides to sign up to fight, although historian David Heal has argued that this number was inflated by including women and children.

On the battlefield, Luxembourgers were often split up due to the Foreign Legion’s tradition of amalgamating foreign volunteers.

Nonetheless, at the lower level there were often opportunities for Luxembourgish soldiers to fight side by side: the 7th Company of the First Foreign Legion, which was heavily involved during the Battle of the Somme, was made up almost entirely of Luxembourgers.

Over a century later, there is still little agreement on just how many men of Luxembourgish origin served in the French armies, with estimates varying from 500 to 3,000.

Unsurprisingly, death totals are also unclear, although one author has listed the names of 294 Luxembourgers believed to have passed away in French service.

The great wave of emigration from the Grand Duchy to the United States in the 19th and early 20th centuries ensured there was a substantial pool of young Luxembourg-Americans ready to serve in the US Army once President Woodrow Wilson finally declared war on Germany in 1917.

US Army records from World War I collected by author David Heal feature family names such as Cigrand, Evert, Clement and Schaack – all of which might be familiar to readers of our series on noteworthy Americans of Luxembourgish heritage.

Heal estimates that up to 1200 first-, second- or even third-generation Luxembourgers would eventually fight in Europe with the American Expeditionary Force (AEF).

And when the Grand Duchy was finally liberated by the AEF in November 1918, some took the opportunity to visit their ancestral homes for the first time.

Among them was Hubert H. Hostert, who spent Christmas 1918 with his grandmother near Mersch before being discharged in May 1919.

For others, though, the return to Luxembourg would not turn out so well: Corporal Peter Mauer, of Luxembourgish origin, died of pneumonia in the capital in February 1919.

Mauer was one of the dozens of Luxembourg-Americans who would never make it back to the US after World War I, although precise numbers are unknown.

Belgian Army and Others

The third-largest contingent of Luxembourgish volunteers served in the Belgian Army, which had around 200-250 Luxembourgers, but there was also a handful of Luxembourgers in other Allied armies that fought in the Great War.

David Heal has found records of five men of Luxembourgish stock in the British Army, including a Mathias Arendt, who died in Italy in 1918.

An additional two Luxembourgish men enlisted in the Italian Army, while a dozen more fought with the Canadians.

The Gëlle Fra on Place de la Constitution stands as a monument to the Luxembourgers who served in World War I.  Sadly, we will never know exactly how many young men of Luxembourgish origin served during the conflict, nor how many died.

The recent commercial success of 1917, a war epic directed by Sam Mendes, has again demonstrated our enduring fascination with the events of 1914-18.

And it’s worth bearing in mind that fighting on the same side as those upper-class British generals were a generation of young Luxembourgers who fought and died to resist those who had invaded their homeland.

Next week, we will take a look at those who remained in Luxembourg, to explore what life was like under the German occupation of 1914-18.