After holding a woodland position all night near Wiltz, Luxembourg, against German counter attack, three men of B Co., 101st Engineers, emerge for a rest. 14 January 1945 / © Public domain

If you remember, several months ago we explored the topic of the 75th anniversary of Luxembourg’s liberation, as American troops, accompanied by Princes Felix and Jean, liberated the Grand Duchy from German rule to the great joy of Luxembourgers. 2019 marks another anniversary as well, as despite the great relief and feeling that the war was coming to a conclusion, Luxembourg had not yet seen the last of warfare and destruction.

Despite the US troops sentiment of ‘Finish[ing] the war in 1944’, this would not come to transpire. The liberation of Luxembourg was one of many larger offensives designed to push the Germans back behind the Westwall – and it succeeded, but not for long. 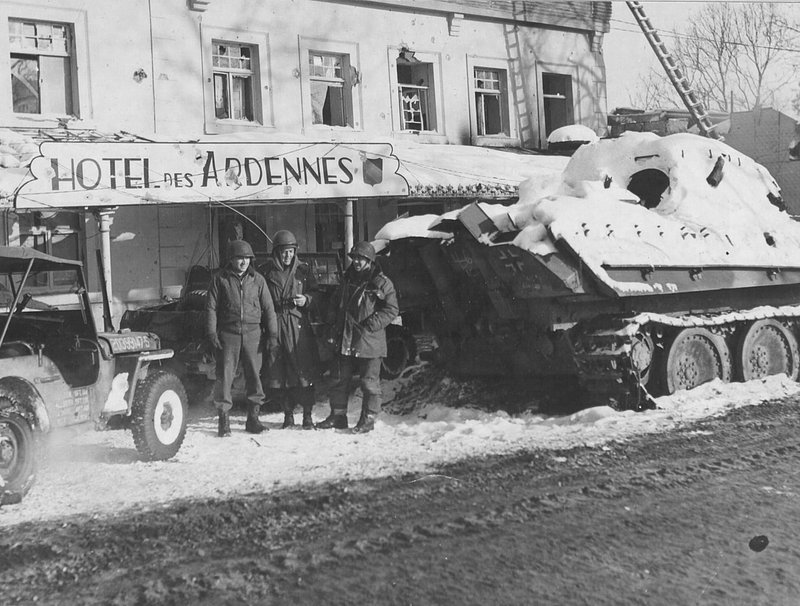 American soldiers beside a German tank Pz. Kpfw. V Panther during the Battle of the Bulge seen here in Echternach on the road to the Ardennes Belgium. / © tormentor4555 [CC BY-SA 3.0 (https://creativecommons.org/licenses/by-sa/3.0)]

Over the months following the liberation, the Nazis planned a major counteroffensive in an endeavour to split the Allied forces. Adolf Hitler’s Chief of Staff, General Field Marshal Alfred Jodl, was ordered to draw up plans for the attack, which would use the elements of surprise, speed, and foul weather conditions. The plan was for three armies to cut westwards across Luxembourg and the Belgian Ardennes in order to cross the Meuse River and retake the Allied force’s vital port and supply hub: Antwerp. A second objective with the offensive would be to force the Allies to declare a temporary cease-fire in the West, allowing the Nazis to focus on their eastern front. The plan was hoped to be a 'second Dunkirk', surrounding the Allied forces in the southern Netherlands, allowing the Germans to crush remaining forces in France.

The Battle of the Bulge, also known as the Ardennes Counteroffensive, ran from 16 December 1944 and lasted until 25 January 1945. On the one side, we had the Allied troops (the US, UK, Belgium, Canada, France, and Luxembourg) and on the other side, we had Germany in this battle.  For a quick throwback, take your mind to Napoleon’s attempted invasion of Russia in 1812. Alongside the Russian guerrilla tactics, Napoleon’s troops suffered greatly from…well, winter. Basically, the cold and ensuing hypothermia and snow did not make for good battle conditions. Whilst the Germans did plan to make use of the nasty weather to their advantage, they too were not impervious to winter.

The counteroffensive certainly did not start well for Allied forces. The US divisions that had liberated Luxembourg months earlier were led by Lieutenant General Courtney Hodges and Lieutenant General George Smith Patton Jr. The defensive line along the Ardennes was, by all accounts, thinly spread, showing how much of a surprise the attack would. The VIIIth Corps was charged with the defensive line, but ignored reports from Luxembourgish citizens. 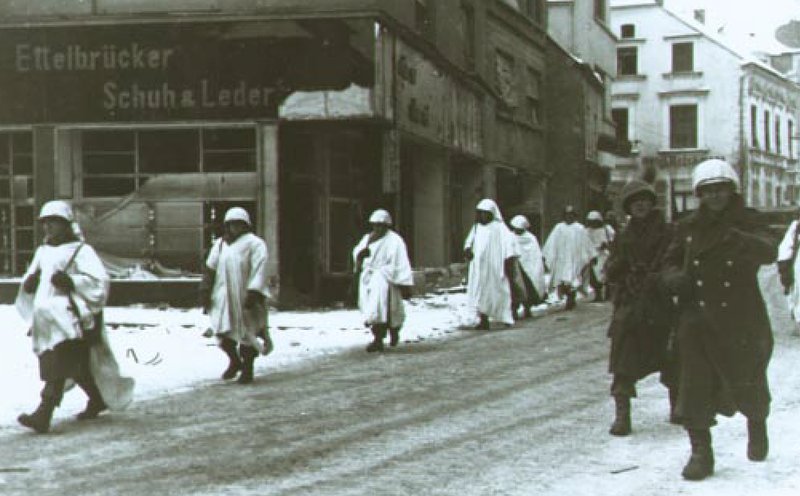 These citizens from Bivels, located right at the border with Germany, had escaped hostage custody in Germany and warned the US troops of the huge concentration of troops in the Bitburg area, but their warnings were ignored. The American forces considered a German offensive over the Ardennes to be impossible, hence the spread out defence. With both this expectation and the dismissal of warnings, the Allied forces were completely taken by surprise as the offensive began in the early hours of 16 December 1944. The Germans took advantage of the foggy and snowy weather, but the conditions were tricky for all belligerents. Echternach, being located right at the border, was the first town to be attacked in the counteroffensive, which went along border lines from Echternach to Monschau in Germany, around 135 kilometres north.

Despite the surprise nature of the attack, Allied forces, especially the 28th Infantry Decision, held strong. The Allied army was massively outnumbered, yet troops were stubborn and managed to defend their positions. Using skillful artillery support, the Allies destroyed key river crossings as they retreated westwards. On the German side, there were supply issues but they were able to take hold of key towns in northern Luxembourg: the first town to surrender was Clervaux on 18 December. Wiltz was then encircled and capitulated a day later, and Diekirch was seized overnight on 19 to 20 December.

Before capitulating, Clervaux, alongside Marnach, Holzthum, Consthum, Weiler and Wahlhausen were all strong areas of the stubborn American resistance. Whilst the advance of the 7th German Army was slow, they managed to seize towns including Ettelbruck and Beaufort.

Increased warfare in the Grand Duchy

Whilst the battle advanced through Luxembourg and Belgium, notably St Vith and Bastogne, Luxembourgish citizens were faced with a difficult choice months after believing their ordeal had ended. The evacuation of almost 6,000 civilians from Diekirch southwards over the Sure was considered an organisational masterpiece, but elsewhere, Luxembourgers had to choose whether to flee or stay.

For those who stayed, they suffered more horrors, as the Wehrmacht returned with the Gestapo - nearly 120 Luxembourgers were arrested and 39 were executed or died as a result of the offensive. In the days before Christmas, increased snowfall was thwarting efforts on both sides. This was however the turning point in the favour of Allied forces. The Germans had Bastogne under siege, but the Allied forces used the Germans on the offensive to their advantage as it was easier to attack the German army out in the open. Both sides fought in sub-zero temperatures and the Allied forces changed the balance, pushing the Germans back. 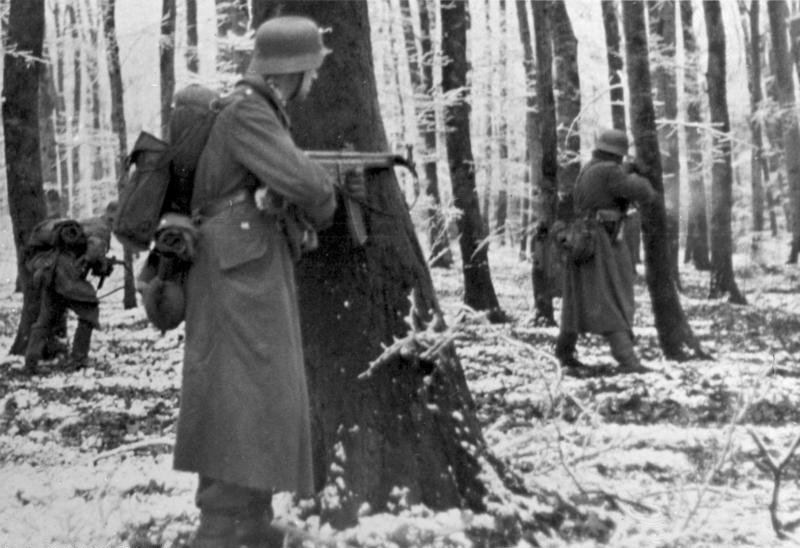 Ettelbruck was retaken by the 80th US Infantry Division on Christmas Day, but Diekirch remained under German control. By late December and early January, a battle at Schumannseck near Wiltz became a focal point. The Germans were attempting to surround Bastogne with reinforcements, but the Americans pushed back through the forests, culminating in the battle at Schumannseck. This is widely considered the bloodiest campaign fought on Luxembourgish soil, as well as one of the deadliest battles of the entire counteroffensive. The three-week long battle led to around 4,000 total losses on both sides. By 9 January, the German resistance broke, allowing the villages of Berlé and Pommerloch to be liberated.

After this point, the battle's front lines began moving after the relative position war nature of the Schumannseck attack. Reinforced by new divisions brought in by General Patton,, the Americans crossed the Sure on 18 January and proceeded to conquer Diekirch days later and scattered the Germans, who were pushed back to Vianden. Most of Luxembourg was liberated by the end of January, with Vianden becoming the last town to be liberated on 22 February 1945. 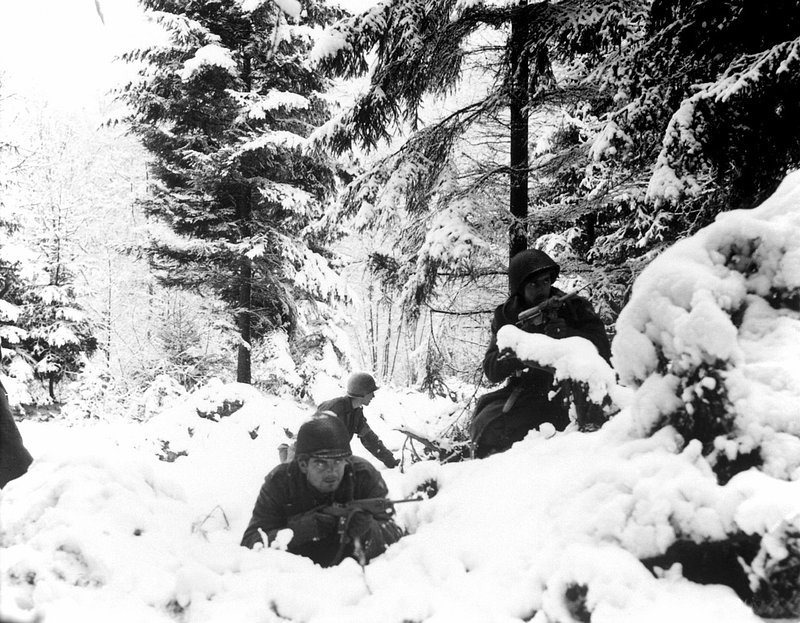 Total death tolls vary, but the Battle of the Bulge remains the bloodiest battle fought by US troops in World War II, as well as the third-deadliest campaign in American history. American losses are at around the 75,600 mark, with German losses eclipsing those at 86,750. The figures put together by the National Museum of Military History count losses as deaths, wounded and captured soldiers, and those missing in action. Belgian and Luxembourgish civilian losses are estimated at the 3,800 mark for killed and wounded.

The Battle of the Bulge: The heroes of Bastogne: 75 years on

This article was brought to you in collaboration with the National Museum of Military History, which generously supplied resources for the article. For more details on the museum's work and exhibitions, visit their website or Facebook page.