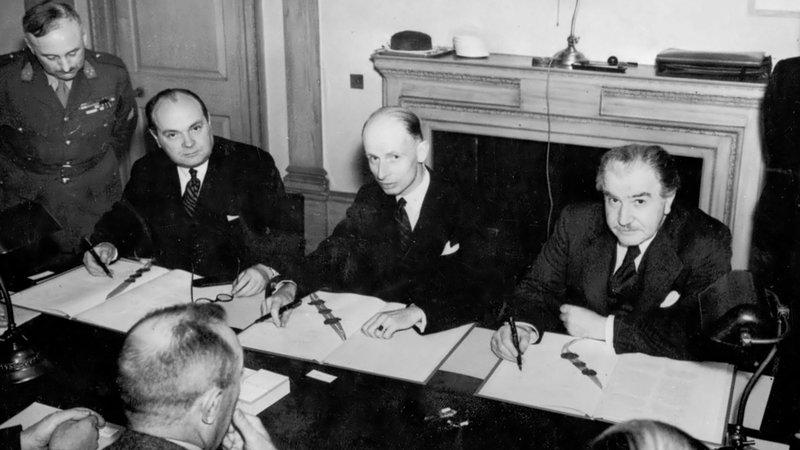 When we think about the spirit of resistance during the German occupation of Luxembourg in World War II, we obviously think of one of Luxembourg's national symbols - Grand Duchess Charlotte.

With Grand Duchess Charlotte refusing to collaborate with the German occupiers, the Luxembourgish government followed their head of state and set up a government in exile. The headquarters of the government-in-exile was 27 Wilton Square in London's Belgravia neighbourhood, which is now home to the Luxembourgish Embassy to the United Kingdom. The government was certainly small, composed of only four members: the Prime Minister Pierre Dupong and Minister of Foreign Affairs Joseph Bech were both members of the Party of the Right, whereas Minister of Work and Social Security Pierre Krier and Minister of Justice, Public Works, and Transport Victor Bodson belonged to the Socialist Workers Party.

27 Wilton Crescent in London's Belgravia, home of the current Luxembourgish Embassy and the HQ of the wartime government in exile. / © By Danny Robinson, CC BY-SA 2.0, https://commons.wikimedia.org/w/index.php?curid=9354969

One thing the exiled government, which also operated from Montreal, did provide was Allied-friendly news of Luxembourg.

Occupied newspapers and the Luxembourg Bulletin

With the Nazi occupation of Luxembourg came, as an inevitability, the occupation of the press as well. As the National Library of Luxembourg's eluxemburgensia website clearly states, the press was under the control of the Nazi occupiers from 10 May 1940 until 10 September 1944. The three main newspapers at the time, namely the Luxemburger Wort, the Escher Tageblatt, and the Obermosel Zeitung, were under the control of the Nazi regime in Luxembourg, although the last newspaper's publication cycle was interrupted during the war.

As well as providing official messages from the Prime Minister in a means to provide hope to readers (although it is at times unclear who the audience of the Bulletin was, presumably Luxembourgers in exile), the paper published news from the Grand Duchy under occupation, often stark and sombre in nature.

Contrasted with the tone of the Luxembourg Bulletin are the events reported on in the Luxembourgish press at the time. The Luxemburger Wort continued to print at the time with its, at the time certainly inappropriate, motto "Für Wahrheit und Recht" - 'For Truth and Law'.

The story of how the Wort was co-opted is a tragic one. The paper had operated an anti-Nazi stance since 1938 and once Luxembourg was occupied, the director Jean Origer and its editors Pierre Grégoire and Batty Esch were all arrested and sent to Mauthausen concentration camp, with only Grégoire surviving the ordeal. The Bulletin describes the paper as retaining none of its character beyond its name.

One of the most telling indications that the Wort was under the control of the Nazis was the coverage of the German invasion's anniversary. The paper described it as the second anniversary of the German return, writing: "The second anniversary of German troops marching into Luxembourg and defending against the enemies of this ancient German land could not be more logically and worthily celebrated than by honouring brave German soldiers responsible for the preservation of Luxembourg in the face of an enemy attack, who experienced heroes death in the face of destruction and celebrated by the thank you of the German-conscious Luxembourgers recognising their heroic actions in opening Luxembourg to the Greater German Reich on 10 May 1940."

Pages 4 to 7 of the first Luxembourg Bulletin focused on the news from Luxembourg, supplemented by the note that the Nazis also publish the 'Nationalblatt', the official party organ which was introduced to replace the formerly independent press of Luxembourg. Notably, the Bulletin detailed the extent of the Nazi terror reigning over Luxembourg and the national spirit of independence that continued to prosper. Its first news article detailed that Luxembourgers refused to cow in the face of the German administration, which was pushing the motion that both the Luxembourgish nationality and language were 'non-existent'. In response, 98% of the country indicated Luxembourgish as their nationality and mother tongue in an October census.

This was followed by a crackdown, including the death penalty for high treason, including the following lines in the legislation: "Any person undertaking any action calculated to interfere with the planned return of Luxembourg to the German Reich, either by the restoration of Luxembourg or its inclusion in a foreign state, likewise forfeits his life for this dishonourable offence against his nationhood (Volkstum)."

The Bulletin reported on the state of industry, transport, and agriculture under the German regime, as well as individual cases such as a priest opposing the Hitler Youth and being sentenced to prison for his statement. Broadly, the paper's focus was instances of bravery and defiance as a means to encourage the Luxembourgish spirit of defiance. At any rate, it is a fascinating glimpse of contemporary reports on Luxembourg's suffering and resistance, and especially interesting to have as an English-language source.

Nathalie Lodhi is an editor and translator for RTL Today with a background in history. If you have a question, suggestion, or subject you'd like to offer insight on, contact Nathalie at nathalie_lodhi@rtltoday.lu. The newspapers consulted can be accessed on eLuxemburgensia, the National Library of Luxembourg's platform for digitisation.