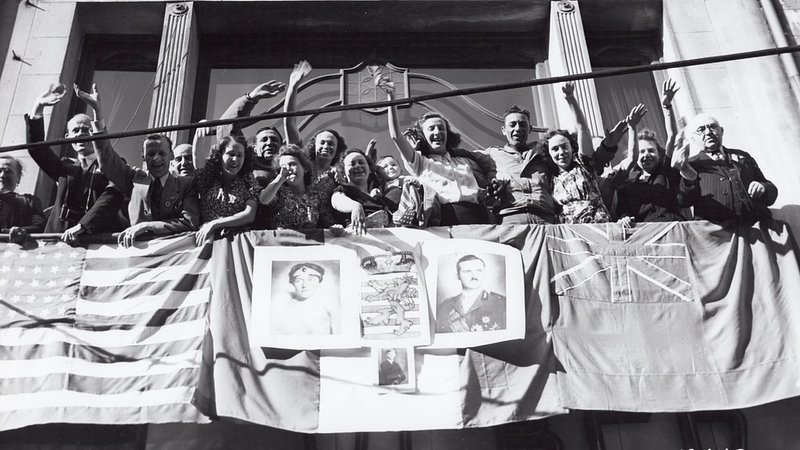 Overjoyed Luxembourgers with a banner made of flags representing the Allied forces and the monarchs of the Grand Duchy. / © Photograph supplied by the National Museum of Military History (MNHM)

2019 marks an important year when it comes to commemorating and remembering the liberation of German-occupied Luxembourg. Last month marked 75 years since Allied forces freed Luxembourg, which became the beginning of the end of a long and devastating ordeal.

The significance of the liberation in 2019 goes beyond the 75th anniversary. Grand Duke Jean (then Hereditary Grand Duke) and his father Prince Felix were among the American forces liberating the Grand Duchy, cementing the young prince's significance as a saviour and figurehead of his country. When the late Grand Duke passed away earlier this year, many paid tribute to his sacrifice to his country, the consensus being that the Grand Duke had gone above and beyond in representing Luxembourg.

Historic day: Footage from 1944 shows arrival of American soldiers and liberation of Luxembourg

A small note before we proceed with the article: some might wonder why we did not time this with the 75th anniversary, which would, of course, have been a very fitting tribute. However, alongside personal delays, I wanted to present some of the links and indeed roots of the relationship between Luxembourg and the United States. The liberation, led by American soldiers, cemented an appreciation for the US in Luxembourg, one which has echoed throughout the years after the war. It felt fitting to explore how Luxembourgers had settled in the United States, which our guest contributor Kevin Wester wrote about in great detail.

Find some of Kevin's articles here!

Without further ado, let us commence with the tale of what could only have been a great sigh of relief for many Luxembourgers.

September 1944 - the beginning of the end

Anticipation on both sides

The Allied landing in Normandy on D-Day (6 June 1944) had Luxembourgers rife with anticipation. Many were hoping that the country would be liberated as the Allies progressed through Europe to the German front, which would bring an end to their four-year torment since the Nazi occupation in May 1940. Of course, the progression through France and Belgium took some time, months in fact. But liberation was on everyone's minds - both occupied Luxembourgers and the Nazi occupiers.

The Germans were getting anxious with news of the Allied forces nearing Luxembourg. As soldiers pushed back towards Germany returned and brought news of the drawing forces, it appeared the German administration lost their nerve in Luxembourg. By 28 August, Gauleiter Simon (read more about him here) gave the order for all German civil administrators to leave Luxembourg and withdraw into the Gau Moselland, the administrative province covering the Rhineland. According to one eye witness, this led to a flurry of packing and evacuation, the Germans prioritising women and children in the last week of August. The majority of German administrators and collaborators left on the night of 31 August, travelling by train into the Gau Moselland.

Higher-ups in the Nazi regime did not appear fully thrilled with the evacuation. Ernst Kaltenbrunner, Chief of the Reich Main Security Office, sent a telegram to his boss Heinrich Himmler, describing Gauleiter Simon's evacuation measures as "rushed and irresponsible" and recommended sharp measures. However, the reprimand, beyond forcing the head of Civil Administration to return days after, never occurred as the Reich required as many people as possible to fight back against the encroaching Allied forces.

The push to the Western front

Over with the Allied forces, Prince or Hereditary Grand Duke Jean had just been appointed to the third battalion of the Irish Guards on 11 June, likely never realising he would lead the liberation of his homeland. Broadly, the Allied troops in their various subdivisions began proceeding towards the Western Front, liberating areas of France and Belgium in the process. Luxembourg fell along the route of the 1st and 3rd US Armies. 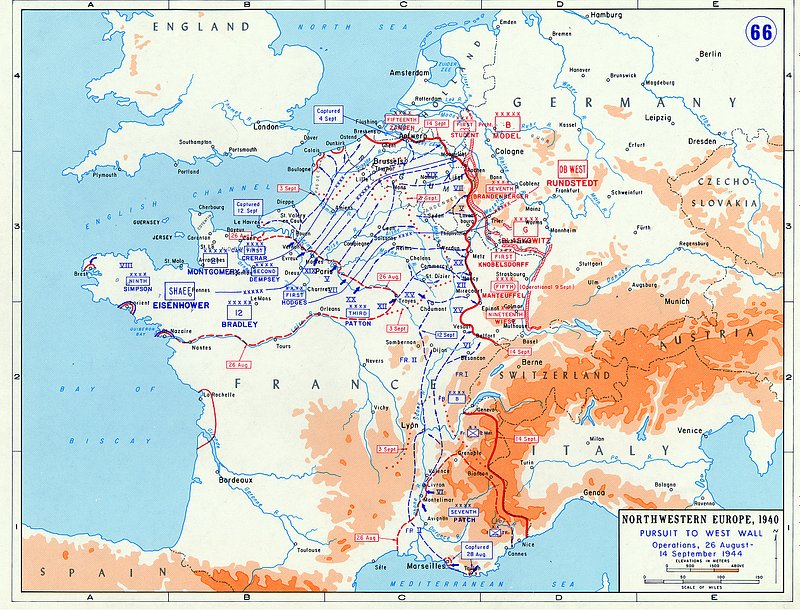 The 5th US Armoured Division crossed the border into Luxembourg at Petange. During the crossing, the Allied forces experienced their first fatality on Luxembourgish ground, namely American soldier Lieutenant Hayman Josephson. The troops proceeded towards Bertrange via Dippach, but had to fall back near Grevels Castle (not far from Route de Longwy), which was destroyed in the crossfires of the liberation.

The troops retreated towards the Dippach forest and delayed liberating Luxembourg City to the next morning, which in turn allowed Prince Felix to join the troops and enter the freed Luxembourg City on 10 September.

Prince Felix, together with General Lunsford E. Oliver, came out on the balcony of the Cercle-Cité on Place d'Armes to wave to the overjoyed Luxembourgers, thrilled to see their monarch's consort with the troops that had liberated them. Hereditary Grand Duke Jean joined his father in the afternoon, going to Luxembourg City Hall on Place Guillaume II. The first edition of the Letzebuerger Wort to be published after the liberation, on 11 September 1944, recounted the events joyously, describing a 'storm of enthusiasm' greeting Prince Jean as his father held the Luxembourgish flag and the people sang their national songs. The Wort wrote: "The entire Luxembourgish people, especially the Luxembourgish youth, knows that Prince Jean is the guarantor of the country's future."

"Welcome! Warm happiness, happiness that almost brings tears,, floods us when we welcome you, allied Troops, with the exclamations of affectionate greeting. With grateful hearts we thank General Eisenhower, who made an assuring address to us, a few days ago. On their glorious way to Victory we meet once more the American soldiers. The recollection of their stay in Luxembourg after the last war never faded away. By thee events we are aware of the kinship of spirit, which binds us together, and our friendship grows tighter and tighter.

With pride we see come back our Luxembourg sons, who fought for the liberation of their country. They stood there, where we could only be in our feelings.

Today everyone looks cheerful. The liberation of our territory has come. The irresistible advance of our friends goes on."

Of course, the rest of the country required liberating and the push was not over. To prevent this article from becoming too long, we will stop at the liberation of Luxembourg City and explore the rest on another occasion.

Naturally, the liberation of Luxembourg City is a historical event naturally associated as a positive event. However, in warfare, even victories are associated with destruction and suffering. There are several aspects to the liberation worth acknowledging.

For one, with the anticipation of the encroaching Allied forces, the Nazi regime in Luxembourg continued with arrests, convictions and executions throughout the summer. Even as late as July, eight resistance members deemed 'traitors of the people' were sentenced to death in front of the 'special court'. All the while, the Nazis continued their programme of forced resettlements in the East and conscription to the Wehrmacht.

A later execution also took place in September. After the Nazis returned days after fleeing towards the Gau Moselland, they executed unmasked anti-Nazi opponents, such as nine individuals who prematurely celebrated the Nazi departure in Dudelange on the night of 2 September 1944. All nine individuals were shot.

On the other hand, the liberation campaign through western Luxembourg also caused destruction to the region bordering with Germany, as is the way of war. And finally, despite Luxembourg's liberation, the devastation was not yet over. In December 1944, the Germans launched a counter-offensive in the Ardennes, known as the Battle of the Bulge. Nevertheless, the Nazi occupation had globally been overcome and for Luxembourgers, there was now light at the end of the tunnel.

This article was brought to you in collaboration with the National Museum of Military History, which generously supplied resources and photographs for the article. For more details on the museum's work and exhibitions, visit their website or Facebook page.