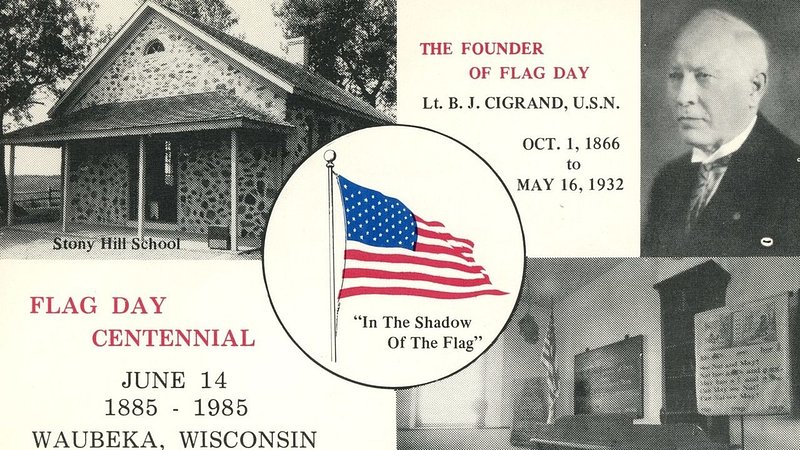 The second instalment exploring interesting Luxembourg Americans includes the driving force being the US Flag Day, an artist, and an author!

If you haven't read part 1, you will find it here. You may also be interested in Kevin Wester's other articles for RTL Today: Luxembourg immigration to Chicago, and Luxembourgish sites around Chicago (part 1 and part 2).

Bernard J. Cigrand was born in Waubeka, Ozaukee County, Wisconsin, in 1866, to Nicholas and Susan (Schmit) Cigrand.  Nicholas had emigrated to Wisconsin in 1852 from Bourglinster, Luxembourg, and Susan was an immigrant from Mensdorf, Luxembourg.  In Waubeka, Nicholas continued his trades as a blacksmith and wagon builder.

As a young boy, Bernard showed great academic ability. He delved into his studies and was particularly interested in American history and patriotic themes and symbols.  As a young adult, Bernard became a public-school teacher at a one-room school house called Stony Hill School, located just outside of Waubeka.  Bernard held his first observance of US Flag Day with his students at Stony Hill School on June 14, 1885.  He chose June 14 as the day for the celebration because it was on June 14, 1777, that the United States Congress officially adopted the stars and stripes as the US flag. 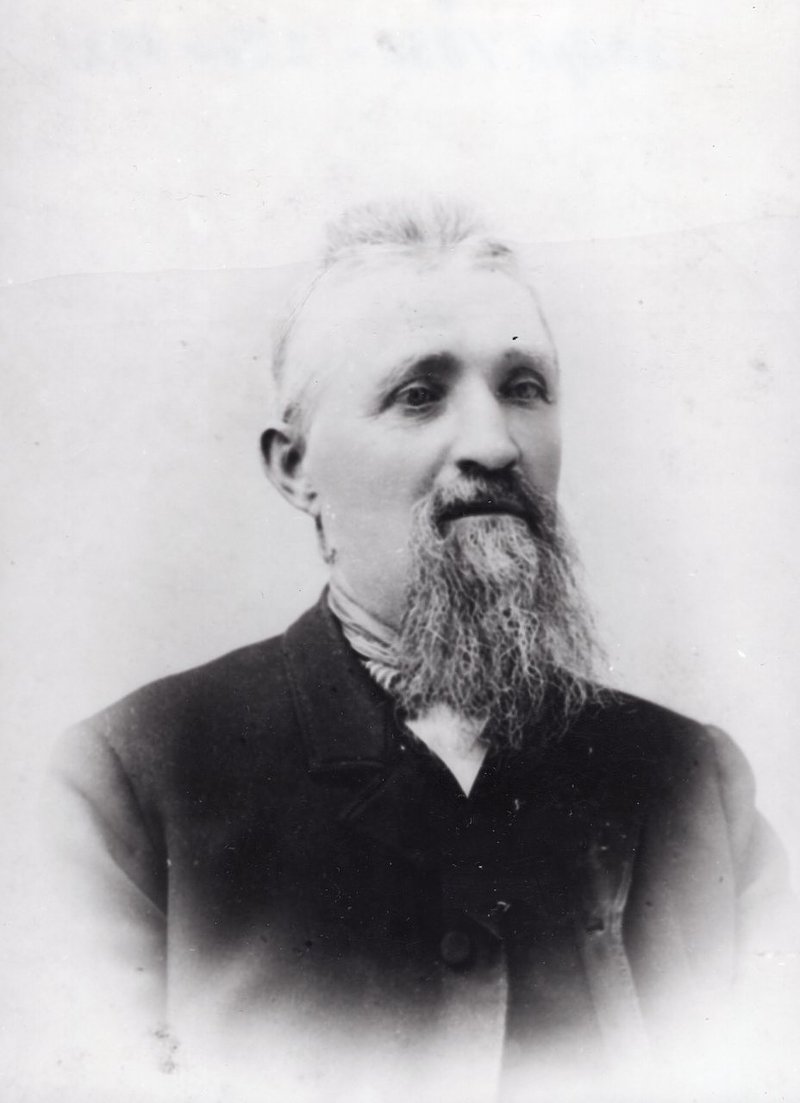 In 1886, the 20-year-old Bernard left Wisconsin and made his way to Northern Indiana Normal School in Valparaiso, Indiana, to begin studies in dentistry.  He then entered Northwestern University Dental School in Chicago and finally Lake Forest University.  Upon his graduation, Bernard began his dental practice in Chicago.  In 1889, he married Alice Needham Crispe in Chicago and the couple had six children.

During his dental studies and his time as a practicing dentist, Bernard never gave up his mission to promote the US Flag and to have a designated US Flag Day on which Americans could pay homage to the ultimate symbol of their freedom.  Bernard made his first proposal for a US Flag Day in a series of articles in the Chicago Argus in June 1886.  He campaigned tirelessly in local and national newspapers and magazines, in books, and on the national lecture platform advocating for the proclamation of US Flag Day.

In 1894, Bernard and LeRoy Van Horn of Chicago, a Civil War veteran, issued a press release calling “all persons who desire to commemorate the birthday of the American flag” to attend a meeting in the assembly hall at the Grand Pacific Hotel in Chicago.  At that meeting, an Illinois corporation was formed under the title American Flag Day Association. The purpose of the organization was to celebrate the birth of the US Flag on the third Saturday of June and to educate school children about the meaning of the flag.  Bernard was named secretary of the organization, but in 1896, he was named president.

The American Flag Day Association held its first, annual observance of US Flag Day on the third Saturday of June in 1894, in Chicago.  Celebrations were held in Chicago parks including Douglas, Garfield, Humboldt, Lincoln and Washington.  Tens of thousands of Chicago children participated.  Soon the American Flag Day Association was drawing national attention and a National Flag Day Association was formed with Bernard as its president.  The crowning achievement of Bernard’s life came at the age of 50, when on May 30, 1916, President Woodrow Wilson issued a proclamation calling for a nationwide observance of US Flag Day on June 14 of each year.

In addition to his work on promoting US Flag Day, Bernard became a noted Chicago dentist and professor of dentistry.  He served on the faculties of Northwestern University, the Illinois School of Dentistry, of which he was Dean, and the University of Illinois.   He was a prolific writer about dental methodology and prosthetics and wrote numerous books on those topics.  National recognition for his leadership in dentistry was evidenced when he was elected President of the American College of Dental Surgery. He served in this capacity for several years.  He also served as President of the Board of the Chicago Public Library.

Bernard wrote extensively about patriotic emblems and heraldry which were some of his favorite topics. Because of his vast knowledge of patriotic emblems, Bernard began to design official seals for municipalities.  It is a little-known fact, that Bernard J. Cigrand designed and created the seals for the City of Chicago and for Cook County.  These seals continue to be used today.

In 1912, Bernard and his family moved to Batavia, Illinois, west of Chicago, in the region of Kane County, home to many Luxembourg immigrants and their descendants.  There he continued his dental practice until 1920, when he entered a dental practice with this son, Dr. Elroy Cigrand in nearby Aurora, Illinois.   Bernard and Alice moved to Aurora in early 1932.

Bernard died unexpectedly of a heart attack in Chicago on May 16, 1932.  He had gone to the city to offer his weekly lecture at the University of Illinois Dental School.  He was buried in Riverside Cemetery in Aurora, Illinois.

Bernard’s memory was not long forgotten.  In 1947, the National Fraternal Congress crusaded for the restoration of Stony Hill School in Waubeka, Wisconsin.  The group developed a foundation to purchase and restore the old school.  The project was completed in 1953 and since that time an annual commemoration of US Flag Day has been held at the school on the Sunday before June 14.  In 1977, Stony Hill School was given to the Ozaukee County Historical Society who continues to operate it as a living museum for children and adults.

In addition, a local National Flag Day Foundation was formed in more recent times in Fredonia, Wisconsin.  The group operates an Americanism Center in Waubeka as a museum to US Flag Day and Bernard J. Cigrand.  The National Flag Day Foundation collaborates with the Ozaukee County Historical Society in the annual celebration of US Flag Day in Waubeka, Wisconsin. Dr. Bernard Cigrand’s dental office is commemorated in a permanent exhibit at Blackberry Farm historic village in Aurora, Illinois.  The exhibit features the dental chair and equipment belonging to Dr. Cigrand.

Finally, in 2000, in recognition of his Luxembourgish roots, Luxembourg’s Ministry of Culture and National Sites and Monuments Service had a bronze bust of Bernard J. Cigrand placed in Waubeka, Wisconsin, in celebration of US Flag Day and the new Millennium.  The bust was sculpted by the Director of theNational Sites and Monuments Service, Mr. Georges Calteux of Echternach, Luxembourg.  Subsequently, copies of the original bronze bust have been placed at Blackberry Farm in Aurora, Illinois, and in front of the Cigrand ancestral home in Bourglinster, Luxembourg.  All of these efforts continue to keep alive the important memory of Bernard J. Cigrand, the son of Luxembourg immigrants and the Father of US Flag Day.

Jean Noerdinger was born in Nagem, Luxembourg on January 3, 1895.  As a youngster, he showed great ability and passion for painting and art.  He eventually attended art school in Luxembourg City, Strasbourg, France, and Munich and Weimar, Germany.  After returning to Luxembourg to begin his career, Jean organized a group of younger, aspiring artists who broke from the Luxemburger Kunstverein, the country’s official art arbiter, and introduced modern art to the Grand Duchy.  Needless to say, Jean’s new approach to art was not well received by some in Luxembourg. 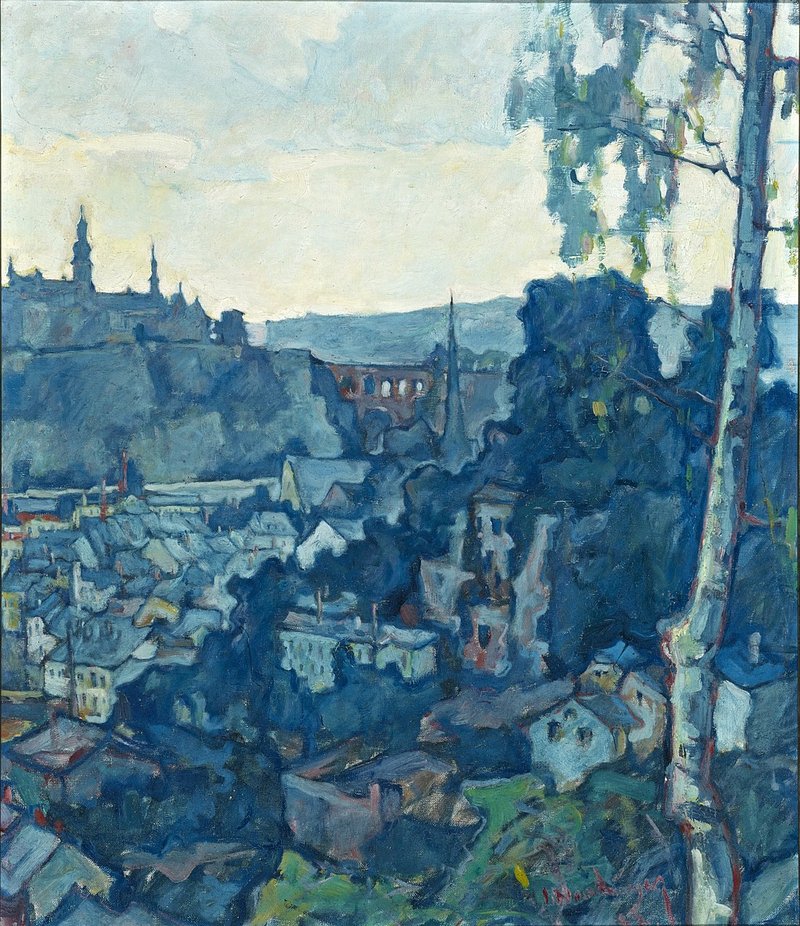 In 1925, the 30-year-old Jean emigrated from Luxembourg and settled in Chicago and eventually in River Forest, Illinois, a western suburb of Chicago.  He became an accomplished artist and sculptor in the Chicago art scene. He was especially known for his landscapes and portraits which were commissioned by well-known Chicagoans. 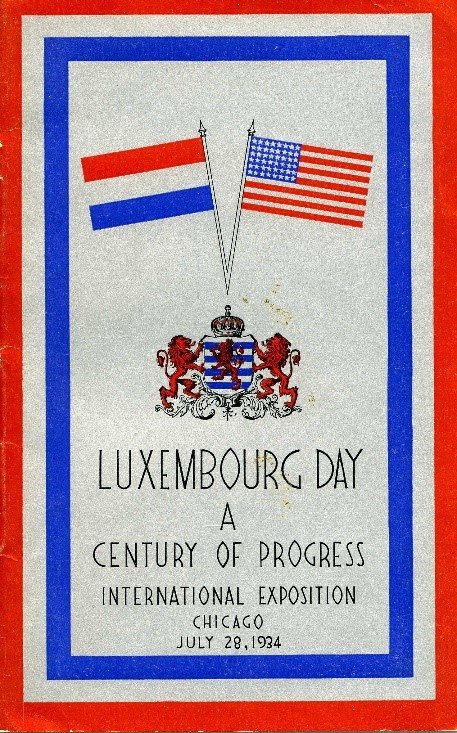 The Century of Progress exhibition / © From the Kevin Wester collection

Jean continued his art career until his death on October 13, 1963, in River Forest, Illinois.  Many of his works appear in museums in Luxembourg and his Luxembourg landscapes are very familiar to the viewer of Luxembourgish art.

Joan Wester Anderson was born in Evanston, Illinois, a northern suburb of Chicago, in 1938, and raised in the Rogers Park neighborhood of Chicago.  She is the great-great-granddaughter of Wilhelm Sinner, one of the first Luxembourg immigrants to Chicago from Grosbous, Luxembourg, in 1845.  Her great-grandfather, Melchior Wester, was an immigrant to Wisconsin from Bertrange, Luxembourg in 1854.

Joan attended St. Jerome Catholic School and St. Scholastica High School in Chicago. She then attended Mount Mary College in Milwaukee, Wisconsin, for two years until she became employed by WEAW radio in Chicago.  Shortly thereafter Joan moved to WIND radio in Chicago which played “Top 40” tunes for teenagers.  She was promoted to programmer at the station and got to know many of the “teen heart throb” musicians of the day because of her position promoting their music at the station.  In 1960, Joan married William Anderson and became an at-home-mother devoted to raising their five children.

Joan began her writing career in 1973 as a way of “bringing home a second income” for her family of seven.  Over the years, she published a number of articles and booklets focusing on parenting and spirituality but her career as an author never took off as she had hoped.

In 1992, Joan realized her children were now all out of college and she decided to go back to college herself.  She completed her studies at Northeastern University in Chicago.  It was at that time that one of her sons experienced what she termed “an amazing miracle” at the hands of an angel.

Joan decided to give her writing career one more chance and she wrote a book about angels based on her son’s experience and the experiences of others who had similar encounters with angels and the supernatural.  This last-ditch effort to become an author led to the publication of her book Where Angels Walk which quickly became a New York Times Best-Seller.  Where Angels Walk was followed by even more books: Where Miracles Happen, The Power of Miracles, An Angel to Watch Over Me, Where Wonders Prevail, Forever Young: The Biography of Hollywood Legend Loretta Young, In the Arms of Angels, Guardian Angels, Angels and Wonders, Moms Go Where Angels Fear to Tread, and Angels, Miracles and Heaven on Earth. 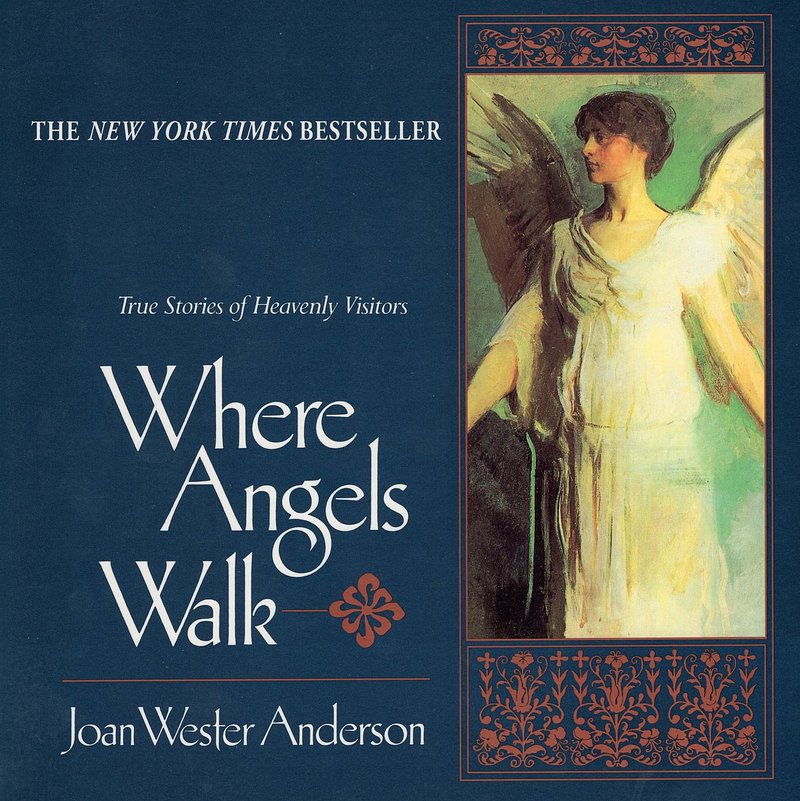 Joan, considered a driving force behind the “angel craze” in the United States in the 1990s, appeared on many American talk shows including Oprah and the Joan Rivers Show.  What should have been her “retirement years” turned into a flurry of appearances, travel and book signing events.  Joan developed a huge community of followers and became a sought-after speaker throughout the United States on the topics of angels, the supernatural, spirituality and parenting.  Her last-ditch effort to become an author and Where Angels Walk had changed her life forever.

Joan now lives in retirement with her husband Bill in Wheeling, Illinois, a northern suburb of Chicago.

Kevin Wester resides in Milwaukee, Wisconsin, USA and is the former Executive Director of the Luxembourg American Cultural Society.  He now operations Luxembourg Adventures tour company and assists individuals in reclaiming Luxembourg nationality. He is an avid genealogist and researcher of Luxembourg and Luxembourg American topics. You can contact Kevin by email.