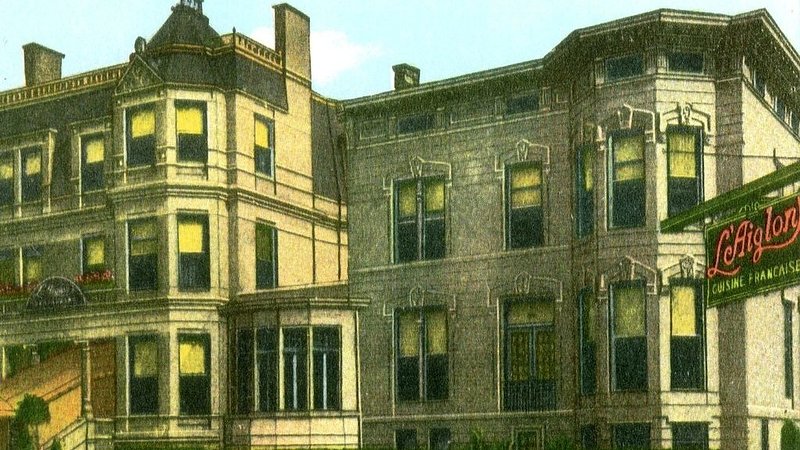 Exterior of L'Aiglon restaurant. / © From the Kevin Wester collection

Welcome back to part two of our article on Luxembourgish sites in and around Chicago. After Kevin Wester presented the first two Luxembourgish institutions in Chicago, we're back to explore some more.

If you remember correctly, the previous article ended with a Luxembourgish Teddy - Teddy Bettendorf, that is. Today we start with a different Teddy, who opened a popular restaurant in Chicago.

Theodore “Teddy” Majerus, an immigrant to Chicago from Niederwampach, Luxembourg, operated a famous, upscale French and Creole restaurant in Chicago named L’Aiglon. The name comes from a nickname for Napoleon II, son of Emperor Napoleon I. It is based on the French word for “eaglet” or a young eagle. The L’Aiglon restaurant, which Teddy operated from 1926 to 1962, was frequented by some of Chicago’s most noteworthy and wealthy residents. 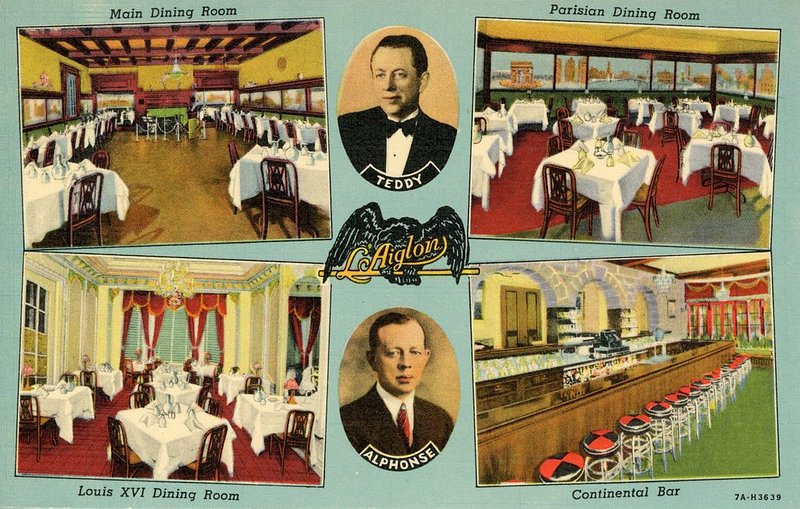 Born in Niederwampach in 1888, Teddy made his way to Paris and London as a young man and trained as a caterer in a number of high-end restaurants. These experiences gave him a strong foundation in French cuisine and delicacies. In 1916, he emigrated to America, namely to New Orleans, Louisiana, where he continued his culinary career at the city’s famed La Louisiane restaurant. It was there that he expanded his culinary aptitude by learning the art of Creole cuisine. Finally, he made his way to Chicago where he worked with famed restaurateur Gaston Alciatore at his French restaurant also called La Louisiane located on Chicago’s South Michigan Avenue.

Longing to operate his own upscale restaurant, Teddy began his L’Aiglon restaurant in 1926. It was located on Ontario Street in downtown Chicago. His younger brother Alphonse, also an immigrant to America, joined him in this endeavor.

Teddy employed outstanding chefs and the utmost professional waiters. He boasted one of the best wine cellars in all of Chicago. Yet it was the personable and hospitable Teddy himself, who made L’Aiglon the perfect venue for the perfect culinary experience. He enjoyed the reputation as one of Chicago’s finest hosts and restaurateur. 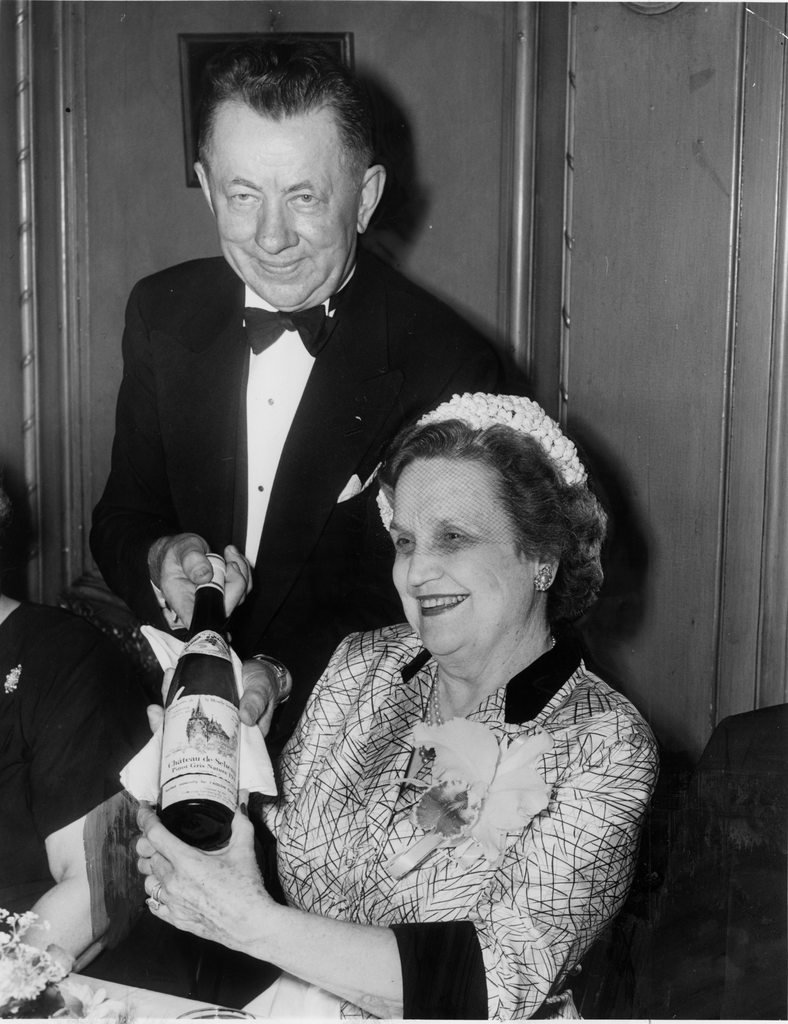 Teddy Majerus with US Ambassador to Luxembourg Perle Mesta at L'Aiglon with a bottle of wine from Schengen, Luxembourg. / © From the Kevin Wester collection

Teddy operated L’Aiglon until his retirement in 1962 at the age of 74. This marked the end of his 60-year career and the end of one of Chicago’s most famous restaurants. Teddy died June 16, 1967, in Neuilly-sur-Seine, France, while on vacation with his sister. His body was shipped back to Chicago where he was buried with other members of his immigrant family.

Mel Thillens was born in Chicago in 1914, the son of John Thillens, an immigrant from Brachtenbach, Luxembourg to Chicago and a greenhouse operator on Chicago’s northside. As a boy, Mel fell in love with baseball and became an avid player and fan.  Mel was also very entrepreneurial and, in 1932, he opened a currency exchange and check cashing business. His clients were mostly factory workers who came to his business to get their paychecks cashed. Mel soon conceived the idea of bringing money directly to the worker and thus he began the first, mobile, armored-car check-cashing service in Chicago. This business quickly grew and proved very lucrative.

In 1938, Mel’s love for baseball and his spirit of philanthropy compelled him to open his own baseball field on the northwest corner of W. Devon and N. Kedzie Avenues in Chicago. He envisioned his baseball field as a “little Wrigley Field” where area youngsters could come together to play baseball, free of charge and in a quality setting. Thus, Thillens Stadium was born.

Over the years, Mel also donated the use of Thillens Stadium as a venue for numerous fundraisers for local organizations. Thillens Stadium grew to be a two-field baseball park which eventually seated 2,400 spectators and served about 17,000 Chicago youth per year.

In 1940, lighting was added to the stadium which allowed evening practices and games. Little league games and men’s 16-inch softball games began to be televised there by Chicago’s WGN-TV. In ensuing decades, Thillens Stadium continued to grow and expand. Mel’s personal touch could be found throughout the stadium. The centerfield scoreboard contained a picture of one of his Thillens armored trucks. It is estimated that over the years, Mel spent a total of $6 million on developing, maintaining and expanding the stadium. 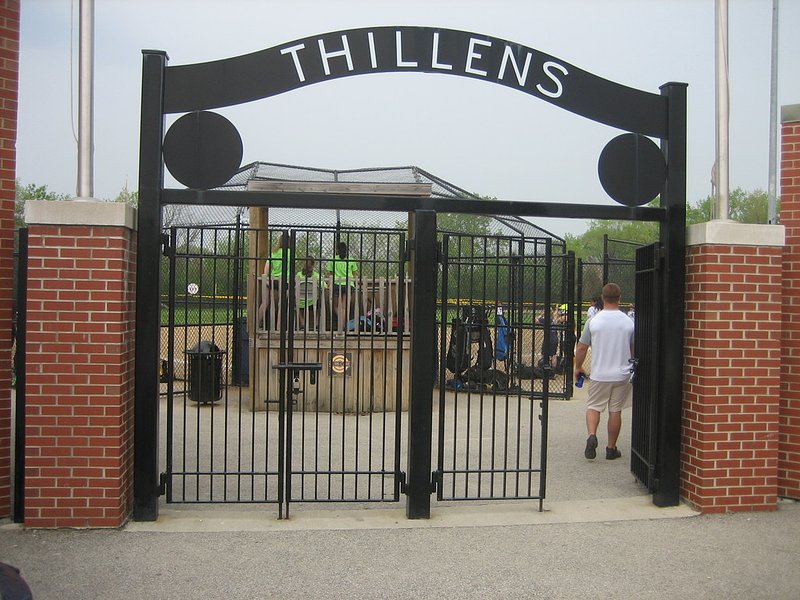 Entrance to Thillens Stadium. / © From the Kevin Wester collection

Mel died in 1993 and at that time, his family carried on the operation of Thillens Stadium and the non-profit charitable fund that supported it. Over time, the fund could not meet the needs of the stadium and, in 2005, Thillens Stadium officially closed. At that time, the City of Chicago and the Chicago Cubs baseball team collaborated and invested $1.5 million to repair the stadium.  It reopened as The Stadium in 2006. 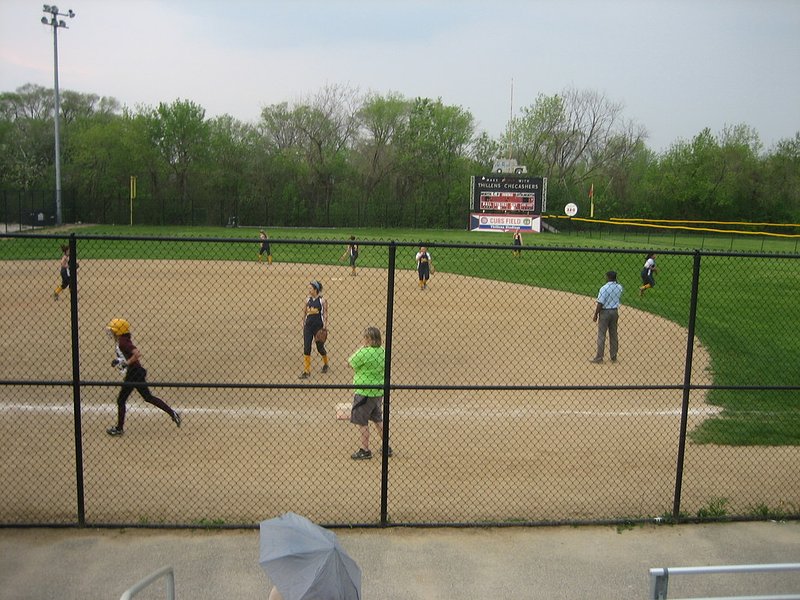 Playing baseball on Thillens field with the Thillens scoreboard in the background. / © From the Kevin Wester collection

Though the stadium on Devon and Kedzie no longer bears the name of Mel Thillens, his spirit of generosity and commitment to youth and baseball lives on at the former Thillens Stadium.

Thus, it was decided that the precious gift from Luxembourg be enshrined at the monastery chapel for the cloistered Carmelite Sisters in Des Plaines, a northern suburb of Chicago. The statue is now in the good care of the Carmelite Sisters and is viewed daily by the Sisters and visitors to the chapel.

Kevin Wester resides in Milwaukee, Wisconsin, USA and is the former Executive Director of the Luxembourg American Cultural Society.  He now operations Luxembourg Adventures tour company and assists individuals in reclaiming Luxembourg nationality. He is an avid genealogist and researcher of Luxembourg and Luxembourg American topics. You can contact Kevin by email.