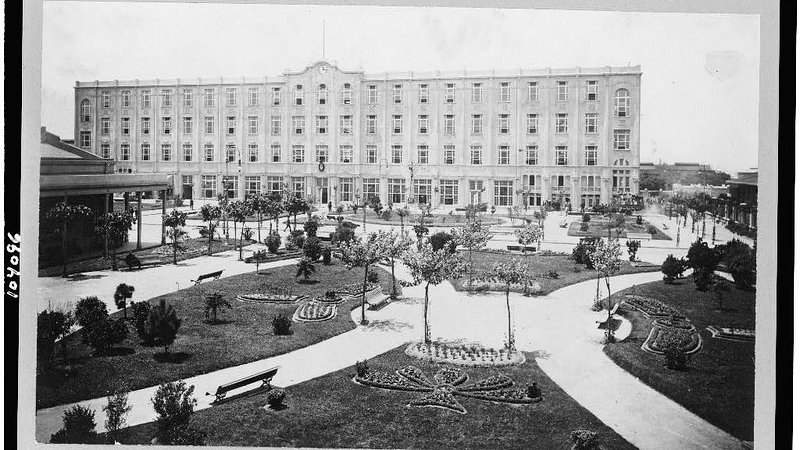 The Immigrants Hotel in Buenos Aires, where immigrants were first welcomed upon arrival in Argentina. Taken between 1900 and 1922 / © Carpenter Collection, Library of Congress

Last week, we explored the three Luxembourgish attempts to emigrate towards South America, all of which were mainly characterised by a return to the Grand Duchy and more broadly, failure.

These attempts to find new lives within the Brazilian Empire and with a Belgian colonial expedition in Guatemala were sadly stories of failure, poverty, and exploitation. As a reminder, all three of these expeditions occurred in the first half of the nineteenth century, decades before a (successful) attempt to emigrate to Argentina occurred. According to some sources, the then-small Luxembourgish community grew and by today, counts some 25,000 to 80,000 descendants with Luxembourgish heritage living in Argentina.

But why exactly did so many Europeans, including a small amount of Luxembourgers, decide to emigrate to Argentina?

Simply put, there are two factors explaining the massive population shift coming from Europe. On the one hand, we have an economic crisis in Europe in the 1870s (good ole struggling times sending people packing and looking for better fortunes, eh?), which is very similar to the initial motivation of the first Luxembourgers keen to cross the Atlantic. Except they broadly ended up destitute, but let's not focus on that too much.

The other main factor is the official Argentine state support and promotion of European immigration to Argentina. As enshrined by the 1853 constitution, Argentine rulers were keen for immigrants to come to the country: "The Federal Government will encourage European immigration, and it will not restrict, limit or burden with any taxes the entrance into Argentine territory of foreigners who come with the goal of working the land, improving the industries and teach the sciences and the arts." Granted, this promotion occurred a full two decades before the first large wave of immigration even took place, but the two factors caused a veritable boom in the arrival of Europeans. The peak of immigration occurred between 1890 and 1930, but overall between 1857 and 1950, a staggering 6,611,000 European immigrants arrived in Argentina. The wave of immigrants during the time was second only to the United States and the effects of Argentinian demographics was staggering - in the 1880s alone, the approximate 800,000 immigrants more than doubled the country's population. The ethnography of the country also changed with this massive amount of immigration.

But where exactly were the Europeans settled? On occasion they were settled on land that the state had conquered from natives, mainly during the 1870s Conquest of the Desert, a campaign designed to exert authority over the Patagonia desert. Anyway, let's zoom in a bit to explore the main focus of this article, the Luxembourgish immigrants.

To understand how and why Luxembourgers decided to leave for Argentina, we need to consider the two largest immigrant demographics in Argentina, which were the Italians and the Germans. For a group as small as Luxembourgers to join in a massive continental exodus, it is worth understanding that the movements of neighbours in turn influenced the Luxembourgish. This, in addition to reports in local newspapers, may have incentivised Luxembourgers to uproot themselves. And indeed, that Luxembourgish exodus has got a fantastic name (slightly more exciting and sensational than the 'Brasilienfahrer'), which is 'Argentinienfieber' and translates to Argentina fever (or Argentine fever symptoms, but I'm more inclined to go for the first translation given its rhyme). Between 1888 and 1890, Luxembourgers hopped on that bandwagon - or boat, more accurately - and more than a thousand Luxembourgers, corresponding to 0.5% of the population at the time, decided to emigrate towards Argentina. Or, you could say, they were beholden to Argentina fever and consumed by the need to make the move to the other side of the world.

The timing remains curious, though. The late nineteenth century saw Luxembourg industrialise and move away from purely being an agricultural country. As we know, the Minette area in the south became synonymous with iron and steel, and this required additional labour. So these Luxembourgers left the Grand Duchy just as Germans and Italians arrived in Luxembourg. However, this can be understood as Argentina appeared to be especially enticing, having entered the top ten world economies in the 1870s.

As for how Luxembourgers emigrated, they did follow the classic trend of grouping together in familial and villager communities (and some remained in urban centres such as Buenos Aires, Santa Fe, or Rosario), but as the Documentation Centre on Migration (CDMH) highlights, there was also a project to build an exclusive Luxembourgish rural community in the Pampas. Half of the migrants arriving in Argentina settled in the village of San Antonio de Iraola, located on the land of a powerful Argentine family's ranch ('estancia'). A photograph of an estancia in Argentina nowadays. / © By Phillip Capper from Wellington, New Zealand - Corrientes estancia, Argentina, 2nd. Jan 2011, CC BY 2.0, https://commons.wikimedia.org/w/index.php?curid=18428167

However, the community did meet misfortune and the village lasted only three years and the new immigrants were followed by the cause pushing them to leave, the economic crisis. By the 1880s, the crisis had become worldwide and also inevitably reached the Pampas grasslands, bringing bad harvests with it.

The relationship between the 'estanciero', who hosted the Luxembourgers' community, and the Luxembourgish 'colonos' took a turn for the worse, leading to an end to the agreement. Of this community, around half remained in less hostile areas of the Argentine Pampas (in addition to the half that had not settled in San Antonio de Iraola), and the remaining immigrants either left for North America or returned home. However, some Luxembourgers were able to find succes. Historian Claude Wey cites the case of Urbain Lambert, a Luxembourger originally from Bourglinster, who owned and farmed an area of 700 hectares in Entre Ríos in 1888 already.

The Argentine project is globally not viewed as a failure as the previous South American expeditions are, despite the community disaster. Researchers at the CDMH were able to ascertain that by the 1930s, nearly 200 Luxembourgers and descendants of Luxembourgers remained in Provincia de Buenos Aires. The majority of those Luxembourgish people could be found in a small area located 80km south of San Antonio de Iraola. Further research is required on the fates of Luxembourgish immigrants to Argentina, but the Luxembourgish presence certainly endured.

Nathalie Lodhi is an editor and translator for RTL Today with a background in history. Special thanks are given to the 'Centre de Documentation sur les Migrations Humaines' in Dudelange, which has extensive documentation on migration patterns from and to Luxembourg. If you have a question, suggestion, or subject you'd like to offer insight on, contact Nathalie at nathalie_lodhi@rtltoday.lu